I suppose I’m a fan of alien movies, mainly in the sense that we don’t really know if they exist or not. Take seeing a film like “District 9” and then as part of your double feature seeing “Steel Magnolias”. Right. The two just don’t seem to be comparable on the same level, do they? Alien movies, like those of vampires or horror films, have been around for a while. And it seems that every alien movie features the aliens coming to earth to conquer and enslave the human race (or that’s what I’ve ascertained after some 30 + years of movie-watching). Granted, we’ve evolved beyond the point where every new alien movie involves “little green men” from Mars, but it’s all in the same vein. Now along comes “District 9”, a different kind of alien movie but with the roots still seeded in the traditional storyline of the genre. Peter Jackson put his name on it and all of the sudden this film became so much more than it probably ever would have. Well Mr. Jackson, is your seal of approval enough or are you still riding the coattails of the “Lord of the Rings” films?

“District 9” jumps right in and shows us what we want to see. There’s no long tracking shots of an alien ship entering Earth’s atmosphere, we see the alien ship in the first minute of the movie. It’s huge and has parked itself over Johannesburg, South Africa. It arrived in 1982 and the allure of alien encounters has long since waned to the South Africans. The actual aliens themselves were found malnourished and near the point of death. They’ve been moved to the Earth’s surface in an area simply referred to as “District 9”. They’re referred to as “Prawns” mainly because they seem to look like overgrown shrimp. They’re ruled by a group of South Africans who control their food (they have a fondness for cat food) and all is not well. In steps the Multi-National United corporation, whose task is to transfer the Prawns to their new camp, all the while evicting them out of their current shacks. This small team is led by Wikus Van deer Merwe (Sharlto Copley), a likable but not all-together there man in command. He’s given the job (presumably not because he’s married to the CEO’s daughter) of making the transfer happen. Things are progressing slowly, but during a routine search and seizure, Wikus is sprayed by a black substance that’s transforming him into one of the Prawns. He’s now on the run from the MNU and can only rely on help from those he was trying to evict only a day earlier. Will Wikus end up an enemy of the state or manage to make things right?

I have to admit that “District 9” is a rather unique movie. I really had no idea as to what to expect having only seen a cover of Entertainment Weekly featuring a man with yellow eyes. The film enjoyed a cult status and is currently ranked in the Top 100 films of the IMDB Top 250 of all-time. That’s not too shabby and it’s a luxury that a lot of cult films seem to enjoy. I do have to mention the special effects in that it’s hard to tell that they really were special. They’re so ingrained in the film itself, you really have a hard time trying to decipher what’s normal and what’s special. But I do warn you, prepare to see a lot of blood (human and alien alike) as they like to shoot anything and everything in this film. While “District 9” might not be up everyone’s alley, it’s a departure from the typical “alien” movies that are out there. Without giving too much away, I think we’ll see more of our alien friends in the future?

I’d recently watched this on Blu-ray and found that it really looked pretty good. But Sony’s 4K offerings are often worth the wait and we do get an improved 1.85:1 HEVC 4K image. First off, the movie uses a lot of different film formats; ranging from archived news footage, to security cameras to the traditional “documentary” look and feel that the majority of the movie is presented in. The majority of the film looks amazing, with everything looking so pristine, I felt like I had a front row seat. Just look at the detail on the Prawns, their eyes, scales and little pincher thingys as well. Amazing. The entire film seems to have a somewhat washed out color palette, giving way to a brighter spectrum of colors.

The DTS HD Master Audio soundtrack found on the Blu-ray has been upgraded to a Dolby Atmos mix that’s worth the price of admission. There’s plenty of gunfire and action to make each and every one of your speakers earn their keep. The language of choice in the film is South African, which is still English though they felt the need to add subtitles here and there (I’m glad they did, actually). There are plenty of booms and thuds to engage the LFE and dialogue is as clear as can be. Being branded an “alien” movie means that more likely than not, the soundtrack will rock and this one most certainly falls into that category.

There are some new supplements added to the 4K disc while the Blu-ray is identical to the previously-existing offering from Sony.

Neill Blomkamp’s two big budget films, Chappie and District 9, are now both available in 4K. This is a different kind of film, but the uptick in picture and video quality is certainly noticeable. It might not be fore everyone, but for fans – they’ll eat this up. 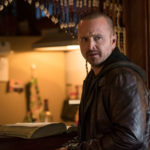 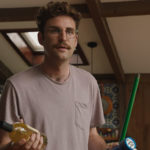