I knew nothing of Gemini Man prior to requesting a copy. Well, that’s a lie, I knew that Will Smith was in it and, given the name, I figured it had to do with two of something. But it turns out that this might go down as a fairly revolutionary film. Not for the plot. It’s awful. It’s contrived and so full of cliches that it’s amazing films like this are still made. But when you’ve got names like Jerry Bruckheimer, Ang Lee and Will Smith attached to your project – things happen. I’m speaking more to the technical achievement that this film undertakes in regard to the visuals. Like The Matrix did with “bullet time” or Saving Private Ryan did with some of their war scenes, it’s now technically possible for an older actor to convincingly play against a younger version of himself. I found that interesting.

Henry Brogan (Will Smith) is a government assassin who’s good at his job. But he’s decided to retire and let’s just say that his employers decide to eliminate him. Obviously, they’re unsuccessful. The head of the Gemini program, Clay Verris (Clive Owen) steps in and unbeknownst to Brogan, Verris has made a clone of him decades ago. He’s raised “Junior” (Will Smith) as his own, training him to be the ultimate killing machine. Essentially, the only person who would be able to kill Brogan is…Brogan – albeit a much younger version of himself. Since this is a Jerry Bruckheimer production, we need a muse and that comes in the form of Danny Zakarewski (Mary Elizabeth Winstead), an undercover agent that’s supposed to surveil Brogan but ends assisting him.

And that’s it. The rest is a visual CGI fest for your eyes. The plot isn’t unlike anything we’ve seen dozens of times before, but if you’re looking for countless motorcycle and car chases, check out a Mission: Impossible movie instead – they’re much better. The real draw here is the visual look and feel of the film and, ok, the audio is pretty amazing as well. I’ve been a fan of Will Smith for years and I can’t really blame anyone in the project that the movie is sub par. It just is. It does beg the question though, if you encountered a younger version of yourself, what would you say? “Don’t see Gemini Man.”

This isn’t the first time that Ang Lee has messed around with a high frame rate film. Billy Lynn’s Long Halftime Walk, which came out in 2017, was an earlier “try” at a 60 frames per second movie. And this is the real draw with this film. This really does affect the overall viewing experience and brings the viewer into the movie. It’s like watching a play in person as opposed to a movie. And it really showcases how much better a 4k presentation can be when compared with its Blu-ray counterpart. The HDR and Dolby Vision really work to enhance the picture, giving us more lifelike colors and a deeper, wider color spectrum. It goes without saying that the level of detail is off the chart. Of note, the 4K disc can only be played in this 60 frames per second mode, so if this is bothersome to you then grab the other disc in this set and watch the film in 24 frames per second, just like every other movie out there. This is certainly a sign of things to come, and hopefully we’ll get a better film in which to see how stunning things can truly look.

It’s hard to top how visually ambitious this film looks with the way it sounds, but the Dolby Atmos soundtrack comes pretty close. This is one of the more active movie mixes I’ve heard in some time giving every single speaker in your setup its time in the spotlight. Bullets whiz by, things crash, tires squeal – you get the idea. And the uncompressed, atmospheric soundtrack is there every single step along the way giving us a full, dizzying sound stage for us to immerse ourselves in. It’s an amazing-sounding track that’s sure to please.

I have to give Ang Lee credit for trying something new and I’m sure this isn’t the last we’ll see of films like this. However, if half the effort went into the screenplay as opposed to the visual effects – we’d really have something here.  That said, Paramount’s disc is visually stunning and is packed with enough features that should warrant a purchase for fans. 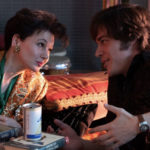 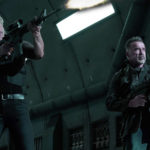