If you would, let’s take a trip back in time to 1997. The previous year had brought us Kevin Williamson’s Scream (directed by horror legend Wes Craven) and it singlehandedly reignited the “teen horror” genre that plagued the 80’s. In all truth, it wasn’t a bad thing. Scream did well at the box office and inspired a series of sequels, including a 2021 remake as well as a television series. Oddly, Williamson had written I Know What You Did Last Summer before Scream, but the success of the latter film generated newfound interest in his earlier work. And, wouldn’t you know it, we’ve got ourselves a franchise. The two films are effectively cut from the same cloth, but did go in different directions. Jennifer Love Hewitt was coasting off her success from television show Party of Five, Gellar from Buffy the Vampire Slayer and then we had the guys. There’s nothing wrong with a maniac wearing a rain coat with a hook for a hand going around killing people – is there? Just remember, when you throw a body in the water, make sure he/she is dead. Else, well, this might happen.

You’ve graduated from high school, the world is in the palm of your hand and your whole life is in front of you. Isn’t it great to be young? Julie (Jennifer Love Hewitt), Ray (Freddie Prinze, Jr.), Barry (Ryan Phillippe) and Helen (Sarah Michelle Gellar) are having the time of their respective lives. After partying a little too hard on the 4th of July, the group accidentally hit a man in the road. Not knowing what to do and afraid it’ll negatively impact their futures, they dump the body in the water, thinking that by the time he’s found – they’ll be in the clear. They then make a bond to keep their secret. A year later, the couples are no more. Julie has become introverted and obsessive about the ordeal and her anxiety is heightened when she receives a letter saying, you guessed it, “I Know What You Did Last Summer” (it’s in all caps in the movie, but you get the idea). A series of murders doesn’t exactly work wonders for the quartet who must now work together to solve this mystery, but also keep their names free and clear of any wrong-doing. What could possibly go wrong?

I’m sure most will agree with me when I say that when it comes down to Scream vs. I Know What You Did Last Summer – Scream will most likely win every time. It’s not that this one is “bad” by any means, I really enjoy it every time I watch. But Scream hit the nail on the head. Oddly, I’d caught a reference while watching this to Dawson’s Creek (a television show also developed by Williamson). There’s a reference to going to “Dawson’s Beach” early on in the film. I thought that was cute. Looking back at this one, it really had it all. A young, up-and-coming cast, a great script and a decently good plot that managed to keep my interest. It also inspired a sequel the next year (the aptly-titled I Still Know What You Did Last Summer) as well as a television series. That’s not bad for a movie that most likely would have never happened if not for the success of Scream. Not bad at all.

If you’re like me, and not many are, then one of your life dreams has been to see Sarah Michelle Gellar and Jennifer Love Hewitt’s ample cleavage displayed in 4K glory. Friends, your wait is over. Reportedly they wanted Hewitt to do a nude scene in a shower and she refused, so they just put her in as little clothing as they could the entire movie. Hey, I’m not complaining. Ok, enough talk about skin. I will say that this movie has always looked pretty good to me. But when it comes to new 4K editions, Sony has usually done it right. The 2.39:1 HEVC 4K image is near flawless.  Detail has been improved, black levels (thanks to HDR) are spot on and the film has a more cinematic look to it. I will note that I’d not recalled how muted the color palette in this film was. There aren’t a lot of bright colors. Then again when you’re dealing with a man who kills people with a hook, it won’t be rainbows and butterflies every scene, eh? To put it bluntly, this movie doesn’t look 25 years old and, well, that’s the point. Fans will certainly want to sink their hooks into this one.

Not to be outdone, we get a new audio mix in the form of a Dolby Atmos track. Granted, there aren’t a lot of opportunities for this to flex its muscle, but I will say that Ryan Phillippe’s character of Barry sure does a lot of yelling. He has issues, man. Issues. The soundtrack sounds good, though I was pretty taken by some of the surround effects. The squealing of tires, the sound that the hook makes when “used” and so forth. Like the video, this one gets another notch on the score, but it’s not a night and day difference. But it’s an improvement and we’ll take it.

Way back when this first came out on DVD, early pressings of this movie were a collector’s item as the trailer included had the phrase “From the creator of Scream…” Evidently Disney/Miramax didn’t like that and sued Columbia/TriStar (now Sony). Those discs were fetching a few hundred dollars on eBay. Why am I mentioning this?

At any rate, we’ve even got a few new features in the form of some deleted scenes and an alternate ending.

I mean…what’s not to like? This movie will probably always pale in comparison to Scream, but so what? It’s got a great cast, the new 4K image looks flat out amazing, we get new supplements as well as a new Dolby Atmos mix. When a lot of studios take the easy route and just design some new cover art or throw in a new transfer, this one takes it to the next level. Any fan of this movie deserves to have this version in their collection. 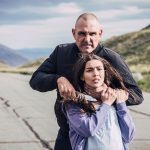 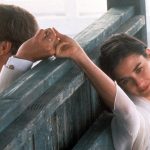