Star Wars. Just saying those words evokes so many memories. And not just for this writer, for everyone who’s seen one (or all) of the films. I’m willing to bet that we all have our own stories as to where we were, who we were with when we saw any or all of the movies. For me, Star Wars: Episode One still remains the only movie in which I actually stood up and walked out of the theater. Yes, really. But as much as I and others hold Episodes I-III in not so high of regard, there’s always IV-VI that are no doubt among every movie-lovers’ favorite. With the release of Episode VII in 2015, it paved the way for the final two films. And with the franchise now in the hands of Disney, we could expect more films. And they delivered. While Rogue One isn’t part of the “official” line of films, if you had to assign it a number, it’d be Star Wars: Episode 3.5. Why? Well it fills in a few very important gaps that Episode IV left out there. Yes, it’s taken four decades, but now we finally know how the rebels got the plans for the Death Star and why, oh why Luke was able to destroy it. Twice. Is the force strong with Rogue One? Let’s find out.

Jyn Erso (Felicity Jones) is a strong-willed child whose father, Galen (Mads Mikkelsen) helped the Empire create a new weapon. You might have heard of it – the Death Star. He wasn’t proud of his work, mind you, but the Empire has a way of getting what they want. We meet Jyn as a child and flash forward after she manages to escape the Empire. Imprisoned and fearing her father deceased, she’s rescued by a Rebel officer (Diego Luna) who arrives with the news that he might still be alive. The Rebels aim to find Galen to get the plans to the Death Star and it’s said that within them is a way to destroy it. Jyn’s help is needed to help locate Galen and help stop the Death Star from being used. Joining the quest are Chirrut Imwe (Donnie Yen), a blind samurai and a mercenary Baze Malbus (Wen Jiang). No Star Wars film would be complete without a droid and we’re treated to K-2SO (voiced by Alan Tudyk).

There are pros and cons to Rogue One. And by “cons” I don’t really mean anything too negative. On one hand, it does manage to fill a few voids that have been lingering for a few decades now. It ins’t a bad movie by any means and for those that love the Star Wars universe, this is a new way to explore it. And I suppose you can’t really blame Disney for wanting to exploit a franchise that’s essentially guaranteed to make them a billion dollars. Otherwise why buy it to begin with? However, even with the presence of characters we know and love (and I’ll leave those out of this review as I don’t want to spoil anything), there are some others that just don’t seem to belong. Maybe that’s just me. We all know the importance of the events that happened in this movie. Had they not happened, the future’s of Luke, Leia and Han would have been much different. A good way to look at this film is like The Bourne Legacy is to the rest of the Bourne movies. Did that help?

Rogue One’s Blu-ray transfer was flat out amazing. I gave it five stars. And here we are a few years later with a 4K image that, well, looks a tad bit better. Let’s face it, this is a Star Wars film (although it’s not technically one of the “Episodes”) and it’ll be handled with the utmost care. The 2.39:1 HEVC 4K image is just simply stunning in every way, shape and form. And as is the case with most all Star Wars films, there are plenty of shots in space with the futuristic-looking and ever familiar Star Wars motif everywhere. Detail is razor sharp and for those that were looking or waiting for these films to go to a tropical setting, well that wait is now over. Contrast is strong, colors are bold and if anything the picture quality is almost too good as it makes a major CGI character appear almost fake and rubbery. The added depth and color of HDR really brings some of the scenes new life. Was it worth the wait? Not really, but it looks damn good.

Back in the day, and I’m talking waaaay back, I used to use the Lucasfilm THX sound as one of the “startup” sounds on my home theater. The guys in my fraternity house would all drop their jaws in amazement (5.1 surround sound was somewhat new in 1997). And here we are, a couple of decades later with the latest, and dare we say…greatest sound mix known to man. The Dolby Atmos takes what the Blu-ray’s DTS HD Master Audio does and turns it up a notch or two. Yes, Disney has had some issues with their Atmos mixes, but this one (to me) sounded just fine.  The iconic sounds of the lightsabers, the guns and everything we’ve come to expect from the franchise is present here. Vocals are pure and crisp, surrounds are directional and keep you on your toes and the LFE get their chance to play when the Death Star’s power is demonstrated. And the atmospheric mix brings it more to life than one would believe. Again, nothing wrong here – it’s perfect in every way.

I’d surmised in my initial review that this three disc set was made somewhat “future proof” in that there were three discs: A Blu-ray with the movie, a DVD and then a Blu-ray that contained the special features. This way when (or at the time, if) Disney got around to producing 4K discs, they could just add the 4K disc and keep the Blu-ray with the extras. And that’s what we have here. Granted, this wasn’t rocket science, but it’s nice to be right once in a while.

That said, as expected, the extras are the same and all located on the included Blu-ray.

There’s nothing wrong with Rogue One. Nothing at all. It’s a perfectly good movie and it does fill the gap for fans between Episode VII and VIII. And, to be sure, it does answer (and quite well) two very important questions that were head scratchers from Episode IV. But it just didn’t feel like a Star Wars movie to me. I realize it’s not an official one, per se, but as entertaining as it was – I felt that it wasn’t really needed. Having said that, it does pave the way for the future spin offs (and there will be more) and the movie was well-made. The Blu-ray offers up reference-quality picture and sound and will no doubt have a place in most every collection. 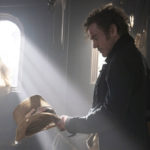 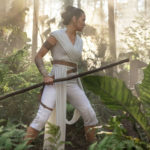