If ever there were a franchise that would be considered “Hollywood Royalty” I’d wager to say that it’s Star Wars. It’s been over four decades and it’s still going strong with new movies still to come. Yes, it’s business and these films make money for studios. A lot of money. And in an industry making a Star Wars movie is about as close to a sure thing as you’ll ever get. A couple of years ago we were presented with Episode VII – The Force Awakens. It was met with positive results (and, of course, a lot of earnings) and set the stage for the remaining two films in the series. It also helped eliminate the memories of the first three films and the less said about those, the better. We’ve got a new number, a new title, a new director and we’re now in a world where Han Solo isn’t in it. Rian Johnson posted a .gif from the movie The Right Stuff when he started production on this movie. It featured actor Scott Glenn as he was about to go into space (as Alan Shepard). The quote, in case you’re wondering: “Dear Lord, please don’t let me fuck this up.”

There’s a lot, yet very little going on in this installment. Recalling the ending scene of The Force Awakens, we found that Rey (Daisy Ridley) had managed to track down Luke Skywalker (Mark Hamill) in some remote portion of the galaxy. That’s where this one picks up. On one hand we find that both Rey and Luke have much in common. Her main goal is to convince Luke to return with her to “fight the good fight”. Luke has his reasons, many of which are revealed later on, why he’s chosen to seclude himself and his motives are his own. Rey, on the other hand, seems to have a mental link with Kylo Ren (Adam Driver). Call it two sides of the same coin. Maybe Kylo isn’t the evil madman we thought him to be after all? All the while the action is taking place with Finn (John Boyega), Poe (Oscar Isaac) and Leia (Carrie Fisher) are trying to outwit, outlast and outplay the First Order led by Gen. Hux (Domnhall Gleeson) and Snoke (Andy Serkis). It’s the melding of these two storylines that manages to seamlessly integrate into one cohesive plot and set the stage for Episode IX.

When you’re in the Star Wars universe, there’ll be a lot of folks paying attention. Writer/Director Rian Johnson seemed to know this and it’s explained in the documentary exactly how important this movie was (is). A particular scene has a producer telling Johnson “George Lucas would like to talk to you. Should I tell him 8:30?” Johnson’s eyes get big, he takes a gulp and says “Yes, that would be fine.” This might be a movie in which I need to go back and watch again. I feel there were a lot of subtle nuances that might have alluded me the first time around. As character-driven as this film is, though, I felt it could have used a bit more action. But it was nice to see that this is mainly Mark Hamill’s movie and it’s a credit to him that he’s still able to carry the moniker of Luke Skywalker convincingly. Then again, who else could? I know that nothing I say in this review will convince anyone reading it to either see it or not. The film serves a purpose and it does it well, blending both the old and new breeds of this ever-expanding universe together while setting the stage for what might be the best movie ever made.

Being a Star Wars movie, I think it’s safe to say that we’d expect nothing but the best when it comes to the technical specifications. And, thankfully, our prayers have been answered (providing you actually prayed for a perfect transfer on the new Star Wars Blu-ray). There’s nothing to dislike about this 2.39:1 HEVC 4K encode. It has a glossy, film-like sheen that showcases the very best in what the film has to offer. Contrast and black levels are right on the money, the CGI is so perfectly embedded in the framework of the movie, I had no idea what was real and what wasn’t (well, aside from the obvious). Detail is tack sharp. The sweeping visuals span the width of your HDTV and leave nothing to the imagination. Couple that with the added colors, detail and depth of the 4K offering and this picks up where the Blu-ray left off.

I’d written in my review of the Blu-ray that “…this is in on way inferior” when it came to the audio. The wait is over and now we’ve got this film with a full Dolby Atmos mix and, yes, it’s pretty amazing. Some of the trademark Star Wars sound effects persist, the firing of the laser cannons, R2D2’s “blips” and “beeps” as well as John William’s iconic score. Every channel is used here and it’s a good thing. The LFE get their turn, several times, and as one might assume – plenty of things blow up. Vocals are rich, pure and crisp. Mark Hamill and Carrie Fisher’s voices might have altered from their Star Wars days, but they still resonate. This is amazing.

This is a three disc set, but that’s a bit misleading. It’s just the two disc Blu-ray set with the 4K disc thrown in. All of the supplements are on the second Blu-ray with the commentary on the Blu-ray, disc one. Enjoy.

I’ll be honest, I preferred The Force Awakens to this one, but that’s not to say that this one didn’t have its moments. It, to me, sets the stage for the final installment much in the same way that the first Harry Potter and the Deathly Hallows movie did for the finale. It’s important in the grand scheme, manages to stand on its own, but we all know what we’re waiting for. The disc looks and sounds outstanding and the included documentary is worth checking out. 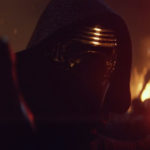