To all you fans of method actors, you have your dream movie! Yes, Marlon Brando, Robert DeNiro and Edward Norton are all in a movie together. Spanning three generations, these actors are considered some of the best around (either for their time or currently). And now we have all three in the same movie getting ready to make the ultimate score! While Robert DeNiro was more in my timeline as is Edward Norton, I have a great respect for Brando, despite his size these days. Not that an actors size determines how good of a role he can play, but he’s not the draw that he used to be. Nevertheless, the mere thought of all three of these actors is probably something that won’t happen again anytime soon. So, what do DeNiro, Norton and Brando all have in common with robbery?

Nick Wells (Robert DeNiro) has been a master thief for a long time. He’s at the end of his rope and is ready to retire and concentrate on the few things that give him real substance in his life. His girlfriend, Diane (Angela Bassett), loves him and is ready for him to give up his illegal ways and is essentially waiting for him to commit to her. He also owns a Jazz bar where he likes to hang out and is the essence of his life. The trouble for Nick is that he’s financially his business partner and friend, Max (Marlon Brando) for a lot of money. This bill is something that is holding Nick back from getting on with the rest of his life and he would obviously like to see it erased. Max has a deal where the payoff is extremely high (some $30 million dollars) for a scepter from the 16th century. Max also has asked Nick to do something he has never done before, which is to work with a partner. In this case, it’s Jack (Edward Norton), who’s a young and cocky punk, but who is good at his “job” nonetheless. Jack has an alter identity by the name of Brian who he portrays as a mentally challenged janitor working at a Montreal museum. The whole reason behind this is that the scepter is located in the museum and Brian is an inside source to scout the area, thereby making the score that much easier.

Does all of this work out? Well, would there be a movie without any friction involved? The main point of the movie, I feel, is to showcase the talents of three of the better (best) actors still around today. While Brando’s appearances are few and far between on screen, he is still a force, namely considering all of the great roles he’s portrayed throughout the years. DeNiro is in pretty much the same boat. Though not as old as Marlon Brando, he is a legend in Hollywood and I look forward to every chance I get to see him on screen. And as far as Edward Norton goes…the man is amazing. From the first time I saw him in Primal Fear, I have been captivated by his acting abilities. He is truly destined for greatness and I sense an Academy Award in his not too distant future (though I doubt it will be for his role here). The Score is a somewhat predictable movie, with an unpredictable ending. The main reason to see it is because of the cast, though Brando has more of a cameo role, he is still good to watch. As far as movies about thieves go, I can say this…it’s better than The Real McCoy! I recommend at least a rental, and with the added features, your money won’t be wasted if you decide to purchase the DVD.

Presented in its original aspect ratio of approximately 2.35:1, The Score now gets the benefit of a new 4K transfer. Like most action/drama movies, the extra space of the screen is used wisely. For the most part, the image looks very clean and vivid throughout. The video has a very film-like quality to it that enhances the picture that much more. Black levels, and this is a very dark movie physically by the way, are right on target and avoid any artifacting. I noticed no edge enhancement at all and my only complaint would be that there was a bit of redness to the flesh tones. While the lack of errors might seem to justify a perfect rating, I think it’s the next best thing. I don’t see why anyone should be disappointed, as this is an excellent visual treatment.

The included DTS HD Master Audio soundtrack is very aggressive. While there aren’t a whole lot of action effects to make the speakers do their thing, there is enough to enhance the experience. The most noticeable thing is the safe exploding at the end (I say that knowing I’m not giving away much…it’s a movie about safe-cracking for cyrin’ out loud!), that sounds awesome. The rear speakers are alive and abuzz for the last part of the movie. Again, while this isn’t reference quality sound, it’s a great track that won’t let you down.

There aren’t many films that will be able to do the “three greatest actors of their generation” starring in one film. We’re just…running out of those types of movies and actors. But in 2001 it did happen and while the result probably wasn’t what the studio wanted, The Score has held up reasonably well. Kino’s 4K presentation offers upgraded video, but unlike some of their more recent 4K offerings – no new supplements. 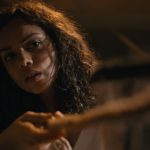 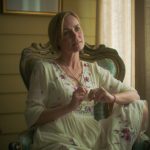