It’s amazing, really, when you think about all the little things that life can throw at you. They can be as simplistic as missing a stop light, making a left when you should have gone right and so forth. For Aron Rolston it was putting his foot on a boulder that he thought was secure when it actually wasn’t. And then in a matter of seconds his life was forever changed. This prompted the book entitled “Between a Rock and a Hard Place” and I’m sure if you ask Mr. Rolston â€“ truer words have never been spoken. The book was released a few years ago and it caught the eye of Academy Award winning director Danny Boyle (who won in 2009 for “Slumdog Millionaire”). Boyle is known for his avant garde projects and I think only someone with his clout could have actually gotten this movie made. And as it turns out, Rolston is portrayed by current man of the hour James Franco. Franco received (and subsequently lost to Colin Firth for “The King’s Speech”) a Best Actor nod for his work and it was well-deserved. This begs the question, though, how can a movie about a man with his arm trapped against a rock wall be interesting?

Aron Rolston (James Franco) is an adventurer. He’s a Phi Beta Kappa graduate of Carnegie Melon University and an engineer at Intel but he longs for the outdoors. The week ends and Rolston grabs what scant belongings he has and heads off to Blue John Canyon to do some climbing. Life is good. He encounters two females along the way: Kristi (Kate Mara) and Megan (Amber Tamblyn) and they spend a few hours climbing and getting to know one another. And thenâ€¦he’s off! Everything is going fine, he’s on schedule and then â€“ it happens. He steps on a boulder, makes sure it’s steady and it comes loose. He falls, as does the boulder and all of the sudden finds himself with his arm pinned between the massive stone and the wall. What to do now? Rolston is smart and experienced, so he quickly takes an inventory as to his possessions. He’s got water, though it’s not enough. He’s got some small snacks and his video camera. That’s about it. We spend the remainder of the movie watching Aron reflect on his life, his family and how he can get himself out of his predicament. Obviously we know he makes it, else we’d have no novel and therefore this movie. But as Boyle shows it and Franco acts it â€“ it’s tense.

I’ve become more a fan of both James Franco and Danny Boyle as time passes and they’re both great at what it is they do. Yes, James Franco is having quite the time with an Academy Award nomination (in a ceremony that he co-hosted), he’s working on his PhD at Yale, he’s young and has the kind of raw talent that most actors can only dream of. Not too shabby. I’m sure it’s clear that I’ve got a bit of insight here and that’s because in addition to seeing the movie I did also read the novel “Between a Rock and a Hard Place.” I’d advise any fans of the film to give it a read and Rolson is articulate as they come. Life comes down to a series of choices and Aron made his. I wonder, though, how many of us would have perished out there where so many others might have found the will to live?

“127 Hours” has a very interesting visual look to it (as do many of Boyle’s films). The 1.85:1 AVC HD transfer certainly looks great in some scenes, though a majority of the movie is shown through the literal lens of Rolston’s camera as it records his movements. Most all of the movie takes place outside as we see the azure sky contrast with the reddish-orange rock that becomes Aron’s prison. Detail looks great as we can see the definition in the rocks and later, the oh so gruesome scene that had many audience members running out of the theater. This film is a bit hard to score given the diverse nature of what’s on screen, but Fox has done a great job with this Blu-ray and viewers won’t be disappointed.

There’s a DTS HD Master Audio soundtrack that, at points, sounds amazing. AR Rahman’s Oscar-nominated score has some moments, but I have to say that Bill Withers’ â€œLovely Dayâ€ nearly brought me to tears. As for dialogue, there’s plenty of it and most is narrated by Franco’s character. To say that this is a â€œone man showâ€ is somewhat of an understatement and though there is a supporting cast, 95% of the dialogue that we hear in the movie is uttered by James Franco. There’s not a whole lot of depth to the soundtrack, and to be honest there’s not really supposed to be. The soundtrack serves its purpose here and that was the intent.

There are enough supplements on this two disc set to warrant a purchase, though I’m sure others like me (who LOVE this movie) will clamor for more. We start off with a commentary track by director Danny Boyle, Christian Colson and Simon Beaufoy as they tell us about the shoot, the Oscar-nominated adaptation and the challenge of getting the movie made. I’m a big fan of Boyle’s commentary tracks and this one is certainly no exception. Moving right along we get â€œSearch and Rescueâ€ which chronicles the rescue effort that eventually saved Rolson’s life. This is somewhat skipped in the film, but detailed in the book as you might imagine. We get a look at the working relationship between Franco and Boyle in â€œ127 Hours: An Extraordinary Viewâ€ and we’re also treated to the short film â€œGod of Loveâ€ by Luke Matheny. The second disc serves as a standard DVD of the film as well as a digital copy, though only the commentary track and the deleted scenes are included there. 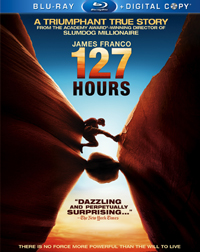