Joon (Mary Stuart Masterson) is a sweet young woman…most of the time. She can be kind and gentle at times, but when no one is looking, she likes to start fires and watch them burn. Her older brother Benny (Aidan Quinn) has taken care of her since their parents died, but now he knows he needs much more support to keep her under control. Soon, the two lose a wager in a poker game and as a result, Benny has to allow Sam (Johnny Depp) to move in, as if Joon wasn’t enough by herself. Whereas Joon likes to start fires and cause scenes, Sam is more subtle, but he likes to pattern himself after Buster Keaton, which is odd in and of itself. After all the hassles and such, Benny has decided to place Joon into a group home, which bothers him, but he thinks it will be for the best. But when Joon and Sam start to develop a relationship and perhaps even a romance, Benny starts to rethink his entire stance on Joon and her antics, as well as his relationship with her.

I like romantic comedies, I admit it. I don’t like them all, but I am a sucker for most of them and this is one of my personal favorites. I haven’t always liked this movie though, but as time passed and I watched it more, it began to get on my good side. And in truth, with each new time I watch Benny & Joon, I seem to like it more and more. All the usual romantic comedy elements are present and all, but this movie seems a little more off the beaten path, perhaps due to the unusual characters. Joon is not the typical romantic female, as she is sweet and kind, but she has a flip side and that can involve arson at times. And across from her is Sam, another offbeat persona that has a lot of charm and sweetness. These characters are more fun to watch than most found in the genre, so perhaps that is why I like this movie so much. So take those two characters, add in a wealth of gifted supporting players, and a wonderful storyline and there you have it, the terrific romantic comedy, Benny & Joon. And when MGM issues a superb overall disc like this, I can’t help but recommend it, hook, line, and sinker. This disc proves that MGM can do excellent work when they want to, so let’s hope to see more like this one soon.

As I mentioned above, I love the two leads here, but even good characters like these can falter without talented workers to bring them to life. And here, we have Johnny Depp and Mary Stuart Masterson, both of whom seem born to play these roles. I am not usually a big fan of Depp’s work, but he impresses me here and I wish he’d take more roles like this. Now I realize Depp is a talented man, but I don’t like his choice in roles, so that lowers his overall value in my eyes. But when he gets his mitts on the right characters, he can be excellent and this movie more than proves that. Other films that showcase Depp’s talents include Donnie Brasco, The Ninth Gate, What’s Eating Gilbert Grape?, Cry-Baby, and Edward Scissorhands. Masterson (Some Kind of Wonderful, At Close Range) also consumes her role well, which allows for some terrific tandem work with Depp. The cast here also includes William H. Macy (Fargo, Boogie Nights), Dan Hedaya (Clueless, Dick), Oliver Platt (Ready To Rumble, Lake Placid), Julianne Moore (Magnolia, The Big Lebowski), CCH Pounder (Ends of Days, Face/Off), and Aidan Quinn (The Lemon Sisters, Practical Magic).

“Benny and Joon” makes its debut on Blu-ray sporting a 1.85:1 AVC HD transfer. The film is nearly two decades old and in some instances, it shows. Overall the print is crisp and clear, though there’s the occasional specs and bit of dirt on the print. It’s not anything too distracting, but this catalog title doesn’t really hold a candle to some of the modern releases. Contrast is strong and though the film has somewhat of a soft look to it, it’s not overdone. All in all, it’s a nice-looking transfer and a step up from the standard DVD.

The included DTS HD Master Audio 2.0 soundtrack is ample, but like the video, really doesn’t compare to some of today’s modern soundtracks. Let’s face it, the movie is probably best-known for the song by “The Proclaimers” whose video is featured within the supplements. Dialogue is crisp and there are a scattered few surround effects. There’s not a lot else to say here, it’s a good mix but nothing too memorable.

The supplements are the same from the standard DVD that came out several years ago so while it’s disappointing to fans of the film that there’s nothing new; nothing’s been taken away either. The included audio commentary by director Jeremiah Cechik has some tidbits about the shoot and the production of the film and fans will get a kick out of it. There are also some stunt reels and makeup tests as well as some deleted scenes and the original theatrical trailer. Also, as noted, the music video by “The Proclaimers” is shown as well. 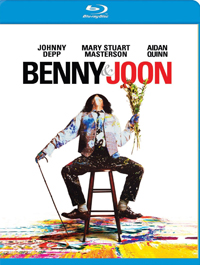