When Jeffrey Beaumont (Kyle MacLachlan) returns to his small hometown after his father has a sudden stroke, he finds that his former place of residence is not as simple and innocent as he had once thought. Lumberton may seem like any other small town in the country, but it holds some dark secrets beneath its picturesque appearance. Almost as soon as he arrives, Jeffrey discovers a severed human ear, which of course, makes him wonder what is going on. Instead of taking the ear to the local police department, he takes it to a detective he knows there, who informs Jeffrey to keep mum about his find, as it could be part of a drawn out investigation. But that’s about all the information he is given, so he is left with more questions than when he arrived. Some of those questions are answered by the detective’s daughter (Laura Dern), who knows certain facts, since she overheard some of her father’s conversations. He learns of a woman named Dorothy (Isabella Rossellini) , and decides to hide in her home to spy on her and gather what information he can. This is just the start of a series of unusual, baffling, graphic, and disturbing events Jeffrey will encounter, and things only become more cloudy around every turn.

I’ll say right up front that I like this movie a lot, due in part to my inclinations toward unusual cinema, no doubt. As with any movie that tests the limits of film, this film will not appeal to everyone out there, so if you have to see movies where everything is spelled out for you, rent The Sixth Sense again. Those of you who can handle some fresh techniques in movies, this is one film you will not want to miss. The concept is not a new one, with a small town that seems nice and perfect harboring evil and darkness. But it’s not that simple, and the writing makes sure the film stays on a fresh path at all times, which keeps things interesting and sometimes unnerving even. This is a deep and complex film, one that you can watch over and over, yet find something new each time, and I think that’s a rare quality in modern films. As I mentioned above, this is an unusual and sometimes disturbing film, so if you’re more into mainstream films, a rental might be a good idea. I recommend this movie to all fans of offbeat cinema and since MGM has served up this Special Edition, it is more than worth a purchase to those interested.

This film was written and directed by David Lynch, who has a gift for unusual cinema as well as a very loyal following of fans for those movies. Keeping in line with most of Lynch’s other films, Blue Velvet has some strange sequences within it, but everything seems to make sense by the end credits. Lynch uses some subtle touches in this film, such as the small details that focus on the innocence of the small town, and then seems to conk you on the head with much more obvious stuff, which keeps you off balance, a desired outcome I’m sure. Lynch’s work is for everyone, but if you like this movie, make sure also watch Eraserhead, Wild At Heart, and The Elephant Man. The cast for this movie is centered on a few major characters and one central character, so there’s plenty of people to keep your eyes on here. The central role is played by Kyle MacLachlan (Showgirls, The Flintstones), who is good in his part, although he sometimes stumbles and gets drowned out by his costars. The other major roles are played by Dennis Hopper (Easy Rider, Waterworld), Isabella Rossellini (Fearless, Immortal Beloved), and Laura Dern (Jurassic Park, October Sky). The supporting cast includes Dean Stockwell (Mr. Wrong, Air Force One), George Dickerson (Jinxed!, Space Raiders), and Hope Lange (Death Wish, I Am The Cheese).

“Blue Velvet” makes its inaugural appearance on Blu-ray with a personally-supervised transfer by director David Lynch. Colors seem bright and vibrant even considering the dark nature of the film itself. I noticed a few crushed blacks and contrast is a tad inconsistent in some scenes, but considering budget (and age) of the film, I was very impressed. There is a tad bit of artifacting and a layer of grain that’s ever-so-present. Still, don’t let my nitpicking deter you as this is the best the film has ever looked.

While the lossless DTS HD Master Audio soundtrack is an improvement over previous releases, it’s not much compared to what’s out there. Dialogue and general overall ambiance have a very nice balance to them and if you don’t shudder every time Dennis Hopper utters the word “Mommy” then I don’t know what else to say. As stated, by today’s standards the sound mix is a bit on the flat side, but considering how this movie has sounded in the past, it’s a winner.

MGM has wisely included the supplements from the previous DVD Special Edition of the film and has added close to an hour of lost footage. While not all of it is new to us, there is some that hasn’t seen the light of day. Die hard fans will appreciate the inclusion of these scenes on this Blu-ray, though it’s clear to understand why some of this wasn’t included in the final cut. The remainder of the supplements are the same as the DVD version with the excellent “Mysteries of Love” documentary, the original Siskel and Ebert “At the Movies” review (Ebert’s still not a fan of the movie, by the way) as well as some outtakes and the original theatrical trailer. 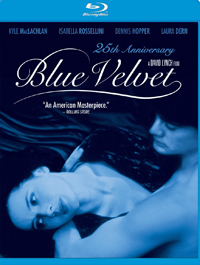