Ah, 1991. It will forever mean a lot to me as it’s the year I graduated from high school, matriculated to college and began the journey into adulthood. It was also a pretty good year for music and movies. Silence of the Lambs was release around the same time as this (and garnered all the critical and commercial praise), but there were those of us that decided not to see what happened to Clarice Starling. Rather, a goofy comedy about a guy and a woman who spent the night in a Target store. The movie, of course, was Career Opportunities and it was written by none other than John Hughes. Yes, that one. Reportedly, Hughes wasn’t too satisfied with the final product and asked Universal studios to remove his name from it. They (wisely) refused. Starring two relatively unknown actors: Frank Whaley and Jennifer Connelly, the movie was largely unseen and only managed to gross just over $10 million. But if any of this has got you curious – here’s what to expect…

Jim Dodge (Frank Whaley) is a dreamer. He spins tall tales and is admired by some of the town’s kids. But, in all actuality, he’s a loser. Think of him as the “uncool” version of Ferris Bueller. Desperate for work, he’s hired at a local Target as a janitor and is summarily locked in the store until 7AM the next morning. Jim dawdles around the store until he happens upon Josie (Jennifer Connelly), who has fallen asleep in one of the dressing rooms. The two have a few shenanigans around the store until a couple of armed robbers (Dermot Mulroney and Kieran Mulroney) show up to loot the place. Jim and Josie must now help the robbers load their loot (it’s never revealed how they got in and evidently the loading dock is accessible, so Jim technically wasn’t locked in to begin with). Can’t Jim catch a break?

Well, it could be argued that getting stuck in a Target store with a scantily clad Jennifer Connelly is the answer to any man’s dreams, but the movie isn’t all about us gazing at her physique. Truthfully, there’s a lot wrong with Career Opportunities. It has plot holes and if not for the success of John Hughes’ Home Alone the prior holiday season, this one might have not ever seen the light of day. This is the kind of movie that, if you saw it when it came out, you’ll have some sort of affection for it. But three decades have passed since this movie was released, so those that did see it way back when are in their 40’s. Time flies. While not the best entry in the John Hughes-written arena, it’s far from the worst. Watch it for no other reason than to ogle Jennifer Connelly. I did.

I can’t remember if I’ve ever seen this on a home video format or not. I’m sure I have. Nevertheless, Kino’s “new” Blu-ray’s are always a bit hit and miss. I have to say, however, that this one looks pretty darn good. The included 2.35:1 AVC HD encode carried over to the Blu-ray format remarkably well. Colors are a bit off, but nothing distracting. Detail is solid, and I’ll avoid the “insert Jennifer Connelly reference” here remark. Given that most of the film takes place inside a well-lit Target, the movie avoids the pratfalls of blocking, grain and contrast issues. I have to say that I was pretty surprised how good this turned out.

A DTS HD Master Audio 2.0 mix is all we get. Then again, it’s all we need. The movie is mainly two people roller skating around a Target, so it’s not like any directional surround sound are going to add much to it. Vocals are pure and crisp and the 2.0 stereo mix does a fairly good job of spacing out the action. There’s not a lot more to say other than it sounds better than expected and serves its purpose.

In case you haven’t figured it out by now, about the only thing I (and most likely a lot of other people) remember about this film is Jennifer Connelly’s form-fitting white tank top that shows off her…ample, figure. Hey, nothing wrong with that. It’s a passable movie showcasing some great early 90’s stuff. Kino’s Blu-ray actually looks and sounds much better than expected. If you want to take a trip down memory lane or just wanted to see what Target stores looked like several decades ago – here you go. 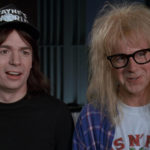 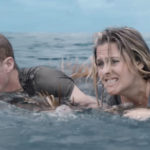