The great warrior Li Mu Bai (Chow Yun-Fat) has lived a life of adventure, one that has made him well known and respected in his homeland. But now he has decided to turn over his legendary Green Destiny sword to a dear friend of his, as a most valuable and meaningful present. The sword is ancient and very powerful, so soon enough, a mysterious assassin arrives and steals the irreplaceable artifact. Of course, this means Li must track down the thief and recover the powerful weapon, no matter what it takes. On this quest to retrieve the item, he is joined by Shu Lien (Michelle Yeoh), who he has passionate feelings toward. This mission further complicates the romance between them and in addition, Li’s father is killed and now vengeance must taken in that respect as well. As the adventure continues, the two will meet other people connected to their quest and of course, the focus on the sword is sometimes blurred by romance, anger, and various high risk battles using supernatural elements.

This film won four Oscars, countless other awards, and become the highest grossing foreign film of all time, a true darling of critics, arthouse lovers, and mainstream audiences. So is it really as good as the hype claims? I don’t think so, but I do think it is a fun movie and one that is very easy to recommend, to be sure. I’ve been a fan of Asian cinema for some time, so the elements in this movie are nothing new, but the scenes are well made, which makes them worthwhile. I think most viewers didn’t have much experience in Asian cinema however, so these elements were fresh to them and as such, they were more impressed, to say the least. I do like Crouching Tiger, Hidden Dragon and think it has some great moments, but I don’t think it is as visionary as many people seem to think. Chow Yun-Fat, Michelle Yeoh, Chang Chen, and many others turn in superb performances, though I’ve heard complaints about their use of Mandarin. This one has terrific visuals, solid writing, a great cast, adequate direction, and some good battle sequences, more than enough to warrant a recommendation. Columbia/Tristar has given it a solid treatment also, so don’t hesitate to plunk down the cash.

I think my favorite part of Crouching Tiger, Hidden Dragon is the presence of Michelle Yeoh, who turns in an excellent performance. I’ve heard some complaints about how she handled the Mandarin language, but even so, she is dynamic and proves her skills once again. I think she is best known for her incredible action moves, but Yeoh is also a very good traditional performer, which she confirms in this movie. Of course, she also shows off her martial arts skills and in truth, I think she could put most men to shame. Her presence is one of power to be sure, but she is also beautiful and graceful, which rounds out her performances. You can also see Yeoh in such films as Supercop 2, The Tai Chi Master, The Heroic Trio, Easy Money, Tomorrow Never Dies, and Butterfly & Sword. The cast also includes Chow Yun-Fat (Hard Boiled, Full Contact), Chang Chen (Happy Together, Mahjong), Zhang Ziyi (Rush Hour 2, The Road Home), and Cheng Pei-Pei (Painted Faces, Kung Fu Girl).

Crouching Tiger, Hidden Dragon isn’t just some catalog titles pushed out by Sony, no they took their time and have given the movie a brand new 4K restoration and it shows, literally. Time (and technology) have been kind to this film and it shows. Color saturation is on target with some dark scenes and earthy tones dominating the majority of the film. Detail seems to be a bit improved here as well, just notice the intricate patterns on the kimonos. Black levels and contrast are on the mark as well, giving the movie a very film-like look. If you’ve never seen this film, there’s no better way to start than with this Ultra HD version and for those that have had the DVD, then the Blu-ray and now this – you’ll feel like you’re watching a new film.

There is a new Dolby Atmos soundtrack that really makes use of the atmospheric sound in the film. The beating of the drums and some of the action sequences sound like I’ve never heard them sound before. Granted this film wasn’t ever too heavy on the audio, but fine channel separation and improved sonics give this this a very robust feel to the track. Dialogue is crisp and clean as well, though admittedly I don’t speak the language. The surrounds are ever present, though the majority of the action takes place in the front stage. On the whole, this is a step up for Crouching Tiger, Hidden Dragon so fans will enjoy the new soundtrack.

Most all of the supplements from the previous standard DVD are ported over here and we even get a new commentary track with Ang Lee and James Schamus (the original is included as well). The same Bravo special: “Unleashing the Dragon” is present with some good interviews. We also get an interview with star Michelle Yeoh, which covers her work on this film, as well as her career in general. The main extra on this disc however, is an audio commentary track with director Ang Lee and screenwriter James Schamus. This session has a good amount of information, but often relies more on humor, which might disappoint some listeners. And, as mentioned, we get a new (and totally different) commentary track with the same two folks. Either one is a good listen, though I prefer the newer one.

Marital arts films are hit and miss with mainstream moviegoers in the US. But, this one was certainly a  “hit” in that its critical and commercial success merited it a Best Picture nomination (among others).  Sony has given this a brand new 4K transfer and for those who have never experienced it, there’s no time like the present (and this format). 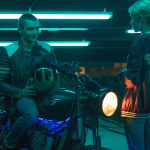 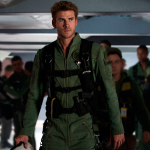