The world is in a bleak state, as the living dead have overrun mankind and dominate the landscape. Some humans survive, but they’re in isolated groups, surrounded by zombies in huge numbers. One group of survivors is within an underground containment facility, a remnant of a failed government initiative. Those inside try to discover the root of the zombie process, but no one seems to agree on that. Dr. Logan (Richard Liberty) seeks to domesticate the zombies and his experiment on one named Bub has been a minor success, as Bub can perform small tasks on demand. Meanwhile, the military personnel in the group have been on edge, tired of being trapped and unable to take action. As Dr. Logan pursues his course of action and other scientists explore their own theories, Captain Rhodes (Joseph Pilato) wants to take a more hands on approach. As time continues to pass and tensions mount, what will become of this isolated band of survivors?

To try to follow in the footsteps of Dawn of the Dead seems impossible, given that it reigns as one of the greatest horror movies ever made. But could George A. Romero add a worthy third installment to his living dead franchise? Day of the Dead breaks rank from the previous films and in a way, puts the zombies on the back burner. The film moves at a slow pace at first, with a lot of exposition, but once things pick up, the payoff is worthwhile. The build to the carnage is long and slow, but the gore is spectacular with some impressive kills and bloodshed. Even so, there is a lot more talking than action in Day of the Dead, with almost all the visceral content in the final third of the duration. On its own merits, this is a decent horror movie with some good gore, but compared to Dawn of the Dead, there is no comparison. Some of the concepts are cool, especially Bub, but Day of the Dead just doesn’t deliver like it should. I still think zombie cinema fans will want to own it, even just if to revisit the final act or as a companion to Night and Dawn. Anchor Bay’s Blu-ray disc is the best version available, so this is the one you’ll want to seek out.

Day of the Dead is presented in 1.85:1 anamorphic widescreen. I am beyond impressed by this transfer, I knew it would look great, but this is one tremendous presentation. The print used looks brand new, free from age related defects and as far as detail, prepare to be impressed. All of the scenes look clearer and crisper than ever before, but some look incredible, with such subtle details visible, I was distracted from the movie to bask in this transfer. The colors look accurate, with some vivid reds on display, while contrast is spot on and never disappoints. I have to credit to Anchor Bay on their first wave of Blu-ray discs, the transfers have been fantastic and this one is no exception.

The audio is impressive as well, thanks to an uncompressed PCM 5.1 option. This soundtrack provides an active experience, but it has a natural presence. So there is ample surround use, but the mix stays true to the material, which means this is not an over the top, gimmicky presentation. When the movie needs some audio thunder, this mix delivers in appropriate fashion, while more reserved scenes have a lower key tone, as intended. The music is loud here, sometimes a little too loud, but overall dialogue is clear and easy to understand. This disc also includes a Dolby Digital 5.1 option and the original mono soundtrack.

The still photos have been dropped, but the rest of the extras are back and we have a new fast facts track to boot. George A. Romero shares his wisdom through audio comments, joined by gore genius Tom Savini, production designer Cletus Johnson, and star Lori Cardille. The track is good, but not great. The main drawback is that a lot of the same ground is covered on The Many Days of Day of the Dead. The featurette runs just under forty minutes and has insightful interviews, as the project is traced from the concept to the finished product. The ins & outs of the zombie cinema world are revealed and the featurette is well crafted, so it is well worth a look for even casual fans. A second commentary track features filmmaker Roger Avary, who wasn’t involved in the production, but is a fan and shares his thoughts on the movie. You can also check out half an hour of behind the scenes footage, mostly related to the gore, while an audio interview with star Richard Liberty chronicles the late actor’s memories of the shoot. This disc also includes a Gateway Commerce Center promo, television spots, and three of the film’s theatrical trailers.

TAGGED: 1985, Day of the Dead (Blu-Ray), George A. Romero, rating-not rated, Zombies
blurayauthority January 28, 2012
Previous Article The Food of the Gods
Next Article Engineering an Empire: The Complete Series 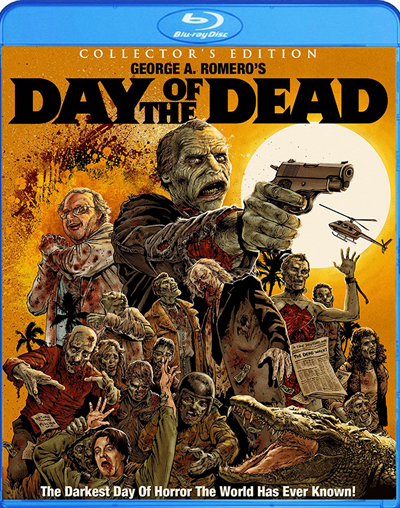