Every so often a movie comes around with a somewhat unknown cast and then something happens. A star is born! And then two! And before you know it, this movie is known as “the one” which was a veritable launching pad for a new slew of Hollywood stars and starlets. “American Graffiti” was that movie for the 70’s, featuring the likes of Harrison Ford, Ron Howard and Richard Dreyfuss. “Fast Times at Ridgemont High” was that movie for the 80’s with Forrest Whittacker, Sean Penn, Eric Stoltz and Phoebe Cates. And wouldn’t you know it, “Dazed and Confused” was that movie for the 90’s. “Dazed and Confused” featured a cast of then fairly unknowns and the two biggest stars: Matthew McConaughey and Ben Affleck had some fairly big parts. Jason London, Adam Goldberg, Parker Posey and Milla Jovovich also have supporting roles and have all found a degree of success since this movie came out. Director Richard Linklater wrote the screenplay and it plays a lot like his earlier “Slacker”, albeit with a more liner plot. So what’s so great about this movie which made it land on critics’ Top Ten lists (back in 1993)? Read on and find out.

It’s the last day of school in 1976 and we follow the lives of several students as they get ready for their Summer before their Senior year. Parties are planned and the ritualistic hazing of the Freshman is about to begin. Randall “Pink” Floyd (Jason London) is the school’s All-Star quarterback who has found a new group of friends. He’s torn between being a jock and being a stoner. As we meet the group of people that compose the movie we see that they range between the nerdy (Mike and Tony) to the utterly useless (Slater). Now earlier I mentioned that this had a more linear plot than “Slacker”, but it’s not a liner story per se. We essentially follow about twenty different people during one night of the year. Like “Slacker”, the movie will often go off on a tangent and concentrate on a new group of people. The “Emporium” is the central focus of the story; it’s the main place for everyone to hang out and for the freshman to recuperate after being beaten by the seniors. It’s also the place where we see perhaps the greatest character in modern film: David Wooderson (Matthew McConaughey), words simply can’t do this man justice and I’ll leave it at that.

“Dazed and Confused” is one of those movies that’s really hard to put into words (as you’ve no doubt noticed), it’s an ensemble piece that has held up very well through the last dozen years. The cast is stellar and it’s a real testament to Richard Linklater, who is still producing some of the more interesting and creative movies out there (we’ll discount “The Newton Boys”). Linklater is a native Texan and was right at home here and I’d have to say that this features one of the best assortments of 70’s songs out there. If you’re one of the few that haven’t seen this movie, make it a point to do so.

“Dazed and Confused” has had so many incarnations on disc format it’s hard to keep up with them all. This Criterion version is the end all, be all when it comes to how the disc looks, though. Universal is incessant about releasing this movie as many times as they can, so Criterion needed to really knock it out of the park in regards to the transfer. They did. The 1.85:1 AVC HD transfer doesn’t blow the recent Universal Blu-ray out of the water, but it’s noticeably a better-looking transfer on Blu-ray. Director Richard Linklater personally supervised this transfer and Criterion has done another fine job. Colors seem a bit richer as compared to the Universal version and I noticed a tad bit more depth as well. Granted there is still a layer of grain around the whole movie, but it’s the way it was meant to be seen. Criterion’s version wins the “transfer war”, hands down.

You can do more visually than you can with the audio, so with that being said the DTS HD Master Audio soundtrack sounds about on par with the recent Universal Blu-ray. Anyone who’s seen the movie knows that it’s loaded with songs from the 1970’s and it was enough to warrant not one, but two soundtracks. Dialogue is a bit on the soft side at times, but thankfully we hear every line of Wooderson’s insightful comments with no distortion. The rear surrounds were very active and several of the scenes really do benefit from the songs chosen (such as when the initial hazing occurs – could there be anything but “No More Mr. Nice Guy” playing in the background?) There’s no real winner in regards to the audio between this and the Universal disc, but considering you get tons more supplements and a better picture – it’s a no-brainer.

For some reason, Universal is reluctant to hand the reigns to Criterion and let them do their thing with this movie. Supplements-wise, this is the same slew that were present on the two-disc DVD from a couple of years back. Criterion has proven time and again that they make top notch discs and this is certainly no exception. Universal released their Blu-ray a few months back with very little to offer in regards to extras and now Criterion has made it very clear which version you’re to own. We start out with a commentary by director Richard Linklater. Linklater is very candid with his comments, he was a younger filmmaker at the time and acknowledges that. He comments on the cast and crew and naturally the success that a majority of them have had since the film. “Making Dazed” is a 50 minute documentary of the movie shot by Kahane Corn. It brings new life into what the story was trying to tell. It’s interesting and certainly a good watch for true fans of the movie. There’s some behind the scenes footage and footage from the 10 year anniversary of the movie as well as some audition footage, some deleted scenes and the original theatrical trailer. What’s most cool is the 72 page book that details the shoot, the movie and has some great pictures throughout. All of this comes in a neat little case complete with new cover art (the original poster) designed by Frank Kozik. If you already own the Criterion DVD, it’s a tough call though the improved video and audio might be a good reason to upgrade. 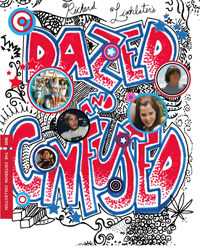