I’ve got to hand it to Joseph Gordon-Levitt. Growing up in Hollywood can’t be easy and neither is the transition from “child star” to a full-fledged adult star, but he’s done it and I think he’s most certainly the exception to the rule.  In addition to starring in a number of bona fide hits over the last few years like (500) Days of Summer, The Dark Knight Rises and, Inception. Add to that, he’s also managed to carve out quite a name for himself.  So when he decided to write and direct Don Jon, I’m sure that a lot of people were paying attention.  And now I’m going to totally switch gears and move this into a discussion about the availability of adult-related material these days. When my wife and I sat down to watch this movie, I was thinking to myself “When I was 18 years old and I wanted to see a naked woman, I had to go 7-11 and buy a Playboy.” That, of course, is a thing of the past and I think the movie does a pretty good job of telling us the good and bad of online pornographic material.  Of course, that’s not the main issue (or is it), but it does make a statement.

Jon (Joseph Gordon-Levitt) loves a few things in his life: his religion, his place, his family, his women and of course…his porn.  Though it’s never really said outright, Jon is a bartender and spends what free time he has pursuing a different girl each and every week. And he usually finds what he’s looking for. Yet, for all of the women in his life, he’s always drawn back to his laptop and prefers that over the real thing.  Things are fine and well until he meets Barbara (Scarlett Johansson), Jon’s ideal of the perfect woman and someone who he pursues.  Barbara and Jon eventually start dating, something that alters his perception of everything, but when she becomes a bit too overbearing – we see that things aren’t as bliss as they might seem.  Jon then meets Esther (Julianne Moore), a middle-aged woman who has recently lost her husband and child.  Jon’s at a crossroads between what he wants and what he needs, but it’s up to him to figure it out for himself.  Who will win out – the seductive sex goddess or the older, wiser temptress?

Going into Don Jon, I really had no idea what to expect. I’d heard that it was a “movie about porn” but clearly there’s more to it than that.  Joseph Gordon-Levitt both wrote and directed the film and it does have some pretty relevant issues.  Channing Tatum (who has a cameo in the film) was originally set to star as Jon before Levitt decided to take on the role.  Made for a scant budget of only $6 million, the cast delivers. Scarlett Johansson does what she does (looks good), but I have to admit that casting Tony Danza as Jon’s father pretty much steals the show.  I’d like to say that Danza showed some real depth, but in all honesty I think he was just playing a more characterized version of his Who’s the Boss? role.  Looking at the movie from afar, I’d have to say that the film says a lot more about modern romances than other films that prattle on about it.  How has the availability of “material” on the internet affected relationships?  More than one might think, I’d imagine. Yes, it’s a bit crude at times, but it’s done with a purpose and I think it works. Recommended.

Don Jon comes to Blu-ray in a 2.40:1 AVC HD image that looks just as we thought it would – downright amazing.  When you can count the individual hairs on Joseph Gordon-Levitt’s slicked back mane, you can pretty much assume that the image is clear. It is.  We can see Tony Danza’s tattoos and perpetual “wife-beater” shirt that he dons in nearly every scene, the detail is exquisite and colors are bold and bright.  This is yet another testament to how good even the lower budget films can look and Fox has done a great job with the transfer here.  Top notch.

While not the audio powerhouse that some others are, Don Jon features a DTS HD Master Audio sound mix that does have a few moments.  I recall a few scenes at a night club where Jon’s pursuing some ladies and there’s another scene in which Jon punches out the window of a car (he’s got a temper, that one) that sounded pretty impressive.  By and large, the film is dialogue-driven and we can hear both Scarlett Johansson and Joseph Gordon-Levitt put on their best “Jersey tawk.” Surrounds are used – sparingly – but by and large the sound stage is front heavy.  The audio delivers, but this one won’t be one that’ll challenge the limits of your system.

Don Jon comes to Blu-ray with a nice selection of extras, though a bit on the shallow side. I’d have loved to hear a commentary track with Joseph Gordon-Levitt, but alas… 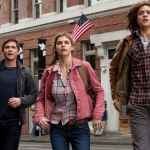