Donnie Darko (Jake Gyllenhaal) comes from an upper class home, has loving parents, and attends a private school, but he has become a troubled young man. He has visions of imaginary friends, has become a social recluse, challenges his teachers, and even with the help of his therapist, hasn’t been able to overcome his problems. His parents know he is troubled, but only his therapist knows the details, such as his most frequent friend, one which no one else can see or hear except for Donnie. This friend is Frank, but he is not a normal man, instead he is a giant rabbit with an evil mind. Frank tells Donnie twisted stories and shows him terrible images, tragic scenes from the past and promises of an even darker future. He even informs Donnie of the exact date of when the world will come to an end, down to the second and of course, this influences Donnie’s thoughts & actions. Frank has him to commit various acts of crime, but Donnie is never caught and some kind of good even seems to come them, in most cases. But when time runs out and Donnie faces his true future, what will become of him and will he ever learn who Frank really is?

Donnie Darko is one of the darkest films I’ve seen in a while, in terms of both subject matter and visuals. The film starts off with an almost tragic events and builds from there, with all sorts of events filled with personal failures, tragic turns, and trips inside the mind of Donnie, who has horrific visions of the past & future. As Donnie is our guide through the chain of events, we see what he sees and this makes it hard to know what is truth & what is hallucinations, but it all makes sense once the final credits have rolled, I think. I don’t think this kind of film appeals to everyone, but it deserves a wider audience that it found in theaters, as the subject matter is often dark, but not all the shadows are the bad kind. There is a message in Donnie Darko and it is well delivered, but not in the usual forceful manner, which is a welcome change of pace. I think Richard Kelly’s writing & direction are superb in all respects, as the premise is excellent and the details unfold at just the right pace, never rushed in the least. I don’t want to lessen any of the impact here, so I won’t say much else, but this disc is highly recommended and shouldn’t be missed.

The title role in Donnie Darko is given to Jake Gyllenhaal, who manages to tread the line between intense and over the top very well, much better than expected. This kind of role is often lessened by actors who push too much to come as weird, whereas Gyllenhaal is able to pull it off and rarely steps too far over that line. His range is tested often and he usually handles himself well, but he does slip a little in some scenes, I think. Even so, Gyllenhaal nails the part most of the time and going by his previous work, I never expected him to. I think it speaks volumes about his talent however, as he can now work in both comedic and darker, more dramatic pictures, thanks to his versatile skills. You can also see Gyllenhaal in such films as Bubble Boy, Homegrown, October Sky, City Slickers. The cast here also includes Jena Malone (Life as a House, Cheaters), Drew Barrymore (Charlie’s Angels, Boys on the Side), Patrick Swayze (Dirty Dancing, Point Break), and Mary McDonnell (Independence Day, Blue Chips).

This is the same 2.35:1 AVC HD transfer found on the Blu-ray from 1999 and there’s a little room for improvement. The title looks a bit soft and there’s a bit of grain throughout. The movie, being very dark in both tone and nature, appears to be a bit murky. This is by no means a bad transfer, but compared to some of the other high definition titles out there, it does pale by comparison. Detail isn’t quite as sharp as it should be. Given the “cult” nature of this film, this would have been the perfect opportunity to give it a brand new restoration. I guess we’ll have to wait for yet another re-issue for that.

This DTS HD Master Audio mix is the same one as found on the previous Blu-ray disc and sounds great. Even reserved scenes have good presence, but in those handful of moments where the soundtrack calls for power, it arrives in spades. But the real draw here is in the subtle touches, which helps build atmosphere, bolster tension, and create mood, all of which is skillfully done here. No issues with the vocals either, as all the dialogue is crystal clear. This release also includes a French language track, as well as subtitles in English, French, and Spanish.

If you own one more of the previous “Donnie Darko” DVD or Blu-ray releases, you’ve seen these supplements. This four disc set is a tad misleading in that it ports over all of the supplements from the previous Blu-ray release and a third disc (standard DVD) from the special edition DVD a few years back. It’s a bit disappointing that there’s nothing new here, per se, but rather just conglomerated. That said we do get a nice selection of extras, starting off with an audio commentary with director Richard Kelly and star Jake Gyllenhaal. The track blends general behind the scenes talk with some interesting technical information, making it an informative and enjoyable overall session. An additional, hilarious commentary track has stars Drew Barrymore, Jena Malone, and Mary McDonnell, and others involved and like the first session, is well worth a listen. The tone here starts off in riotous form and slowly begins to become more serious & informative, but remains humorous and light in tone, on the whole. A third session can be played over the director’s cut and brings back the director, joined this time by filmmaker Kevin Smith. This is a decent track, but it failed to hold my attention. Perhaps bigger fans of the film will find more within the track, or so I hope. The second disc here has the production diaries, three brief featurettes, and the film’s theatrical trailer. As mentioned earlier, the fourth disc is a digital copy for your portable device. 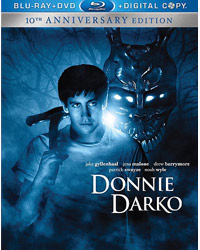