Every year, it seems, there’s some Miramax movie that is praised by critics and manages to snag an Oscar nomination for Best Picture. This year it would seem that that movie was “Doubt”. Normally I’d dismiss such a film as pure art house crap, probably not watch it and go on about my day. But I happen to be a big fan of both Phillip Seymour Hoffman and Meryl Streep and will pretty much see anything either of one of them is in. So, to me, seeing “Doubt” was a no-brainer when it showed up on Blu-ray. For those that don’t know, “Doubt” like other movies based on plays is pretty much a big screen adaptation of a play. Like “Glengary Glen Ross” and “Death of a Salesman”, “Doubt” is probably best seen on stage as opposed to on screen but that’s a story for another time. My future mother-in-law (and the rest of her family) are all devout Catholics and evidently any movie that has Catholicism as a central theme seems to worry her. I can say, without a doubt, that there’s nothing derogatory to the faith. With all that said, let’s get on with the show.

“Doubt” is set just after the JFK assassination and Father Flynn (Phillip Seymour Hoffman) is the newly-appointed priest of St. Nicholas in the Bronx. The school has accepted its first black student, Donald Miller (Joseph Foster) and they fear what might happen to him. Sister James (Amy Adams) can sense his compassion for the boy, but her suspicions get the best of her when she sees Father Flynn place a shirt in a gym locker. She notifies her superior, Sister Aloysius (Meryl Streep) who goes on a crusade to oust Father Flynn from his position. And, in a nutshell ? that’s it. There’s more to it, however. “Doubt” is a lot of talking and very little action so if you’re expecting gunfire and things blowing up, then you’ll need to look somewhere else. The thing about “Doubt” is that we don’t have any concrete proof. We see what the actors see, so we’re left to make up our own minds as to what might happen. Ultimately the problem is solved, but there is (at the end) “doubt” as to what was done.

“Doubt” is an interesting movie, to be sure. It’s well written, well-acted and well-executed. The movie is entirely dialogue driven and for those who want to be force-fed entertainment, will probably need to look elsewhere. Meryl Streep and Phillip Seymour Hoffman give great performances as do Amy Adams and Viola Davis (who plays Donald’s mother) do as well. The main four actors were all up for Academy Awards though all four lost out to other nominees. Still, “Doubt” is a powerful movie that begs a question of ethics and perception. I personally think that this might be best seen on stage, but for those that don’t have access to Broadway (like me), this is certainly the next best thing. If you’re sick and tired of the same old Hollywood films, “Doubt” might be a nice little change of pace.

I watched and re-watched “Doubt” and was yet to really pick out any other dominant color aside from grey. Ok, I take that back as Father Flynn’s robes were about the most colorful thing in the film, but apart from that this is one of the blandest palettes used for a film I think I’ve ever seen. The 1.85:1 AVC HD transfer does look razor sharp and it’s clear to see (pardon the pun) in the intricacies of the church and the fine detail in the wardrobes. Even Amy Adams trademark red hair can’t be seen as it’s hidden behind her habit. “Doubt” looks good, but don’t expect a vibrant and colorful picture to dazzle you, because it won’t happen.

To say that “Doubt” is dialogue-driven is about the understatement of the century. The movie is entirely dialogue-driven and even though Howard Shore’s score does have a few moments, this might as well have been a mono soundtrack. I think I can count the number of times the surrounds kicked in on one hand. Now, to its credit, the movie doesn’t really need to have dynamic sound as all the action is in the words. This won’t be a title that will showcase your speakers to say the least, but the DTS Master Audio track does have a few (a very few) places where it does shine.

“Doubt” isn’t exactly swimming in supplements, though I found the EW.com interview with Hoffman, Streep, Davis and Adams to be fairly engaging. They tell their love of the theater and for the film itself and we do learn about the origin of the play. Howard Shore is interviewed with his motivation for the scoring of the film and we also get a fairly engaging commentary track with writer/director John Patrick Shanley. Shanley is full of information as he should be since he wrote the screenplay for the film as well as directed it. Fans of the movie will love this inclusion to an otherwise routine package of supplements. “Doubt” isn’t for everyone, but if you have the patience to watch it all ? it’s well worth the wait. 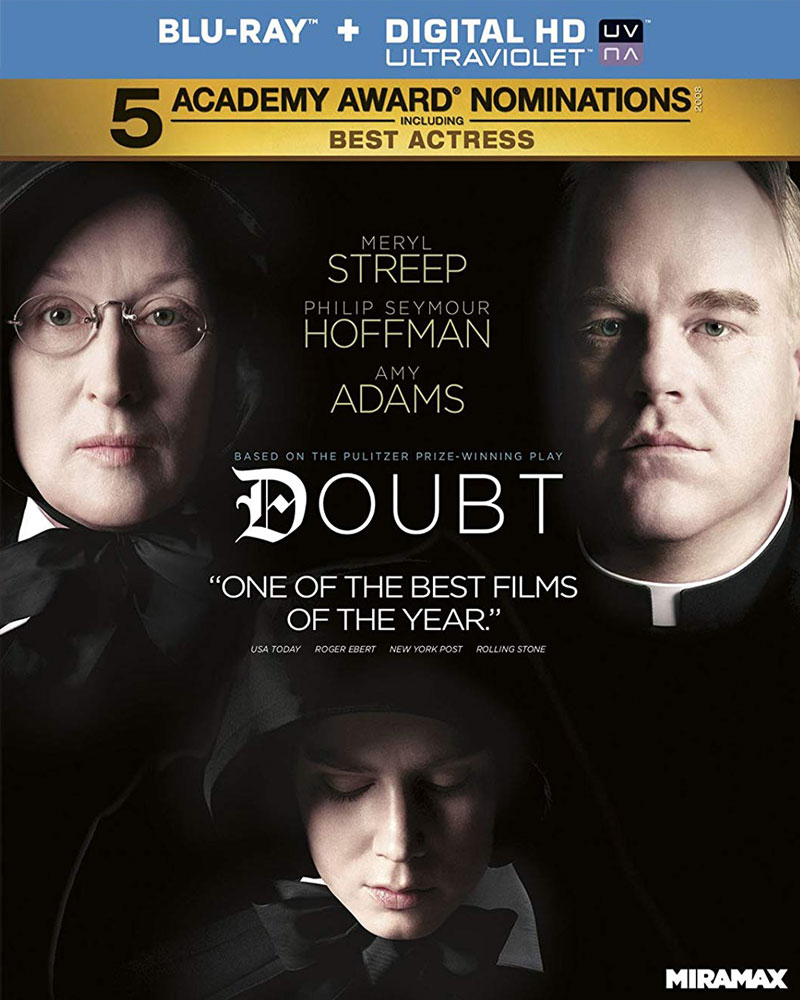