There are films that stay with us for different reasons. The first, and most obvious, is that it’s good. It’s something we’ve not seen before and therefore leaves a lasting impression on the viewer. But, I think, more movies leave an impression on us when it comes to when we saw them. It could be who you were with, what was going on in your life or a vast variety of other things. The point being, we have emotional attachments to movies (or songs, books, television shows, etc.). Take, for example, me. Yes, I’m making this about me. I recently watched Big Trouble in Little China for the first time. That film, like Explorers, was made in the mid 80’s. But I really had no connection to it. Was it good? Yes. I’m a fan of Kurt Russell and John Carpenter. But it just didn’t “do it” for me like some other movies I’d seen at the time. Looking at this movie in particular, it provided a breakthrough for two talented actors: Ethan Hawke and River Phoenix. Hawke is and remains one of my favorite actors and Phoenix met his untimely demise in 1993 – no telling what roles he could have tackled. Enough of this, though – let’s get to the show.

Ben (Ethan Hawke) is your typical geek. He spends time watching old science-fiction films and reading comic books. But he has a recurring dream about a circuit board and manages to convey that to his friend, Wolfgang Müller (River Phoenix) who manages to build the part and later manages to build a spaceship. The group has a third, Darren (Jason Presson) who joins them along the way. At first, it’s fun and games. The makeshift ship (fashioned from an old Tilt-A-Whirl) transports the gang around town and raising a few eyebrows. It’s in the film’s third act that they actually make it to space and that’s when things get a bit weird…

I won’t spoil the surprise for those that haven’t seen this, but it’s certainly unexpected. Bear in mind the man behind the camera was Joe Dante who was coming off a huge success with Gremlins. This film had a huge budget, though it’s been criticized that the studio (Paramount) forced production to get the movie out in the summer. The movie was also one of the first to use the then fledgling ILM (Industrial Light and Magic) and it shows.  The effects may seem dated now, but at the time they were cutting edge. Explorers might not have ever achieved the level of cult stardom that Gremlins or The Goonies did, but it remains an enjoyable watch – even for this guy approaching his 50th birthday.

It’s been a while, a long while, since I sat down and watched this movie. Put it this way, I think I was worried about returning the cassette back to Blockbuster. That’s a while. But, thankfully, the good folks at Shout!Factory have taken this one under their wing and given us a new special edition, complete with a new transfer. I won’t draw any comparisons to the previous version, but I will say that this one looks pretty darn good. It doesn’t have that typical look of an 80’s film and the usual accolades are present with a smoother, more film-like presentation. The 1.85:1 AVC HD image manages to have decent contrast, strong black levels and naturalistic flesh tones. Shout!Factory does some good work with their titles and this one looks to be the cream of the crop. A nice effort.

Admittedly, I wasn’t expecting a lot out of this new DTS HD Master Audio mix. But I was mistaken. I found that even some of the processed effects left a pretty good impression. Vocals are sharp and rich and what few surrounds are in place, do the job right. I’d be remiss if I didn’t mention Jerry Goldsmith’s amazing score which helped propel this film in some of its slower moments. Goldsmith is among my favorite composers and his mix here has never sounded as delightful. It’s a good-sounding mix that won’t blow the roof off the place, but managed to raise an eyebrow from me – in a good way.

What a treat! We get some new supplements that weren’t present on the previous DVD, so let’s dig in.

There are certain “kids” films of the 80’s that will no doubt stay with a generation of us forever. Movies like Gremlins, Flight of the Navigator, The Goonies, D.A.R.Y.L. and the like. Explorers did give us Ethan Hawke and River Phoenix. I enjoyed my trip down memory lane while watching this and if you’re a fan, this is about the most definitive version we’ll have for a while. 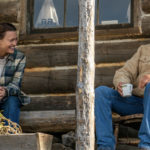 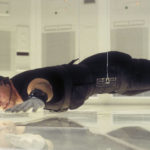