Having never seen an entire episode of Falling Skies, I came into season 3 somewhat blind as to what the show is about. I also can’t account for the quality of the previous seasons. Having said that, I viewed the episodes seen here with that in mind and with an open mind. Third seasons of shows are generally where they find their footing. You’ve earned your audience, you’ve survived the dreaded “sophomore slump” and it should be time to have found your voice. Starting right with the first episode of this third season, I was somewhat dreading it. I am simply not the target audience for a show. I have never been the biggest Sci-Fi fan and this looked to be something of a chore. The show is approaching its 4th season so so clearly, there’s an audience for this thing. I won’t say that I’m going to free my time-slot to watch new episodes, but I respect that it has its audience. This season definitely feels more like a transitional period in the show, but having started here, I can’t comment on what has come before.

There are 10 episodes included here from the show’s third season. There are as follows: 1) On Thin Ice– This begins 7 months after events that I’m guessing occurred at the end of season 2. 2) Collateral Damage – This episode finds the Volm discovering a power plant. 3) Badlands – The two year anniversary of the first attack is approaching and a second attack is believe to be occurring. 4) At All Costs – Finds the people of Charleston defeating another alien attack thanks to advanced weaponry. 5) Search and Recovery – Picks up in the aftermath of a mission gone awry. 6) Be Silent and Come Out – Finds Hal confessing his internal struggle to everyone. 7) The Pickett Line – The Masons run into trouble when outlaws intercept their search and rescue mission. 8) Strange Brew – Tom makes plenty of discoveries during his way back to Charleston. 9) Journey to Xibalba – Tom uncovers crucial information about the alien operation. 10) Brazil – Season 3 comes to a conclusion. I won’t provide details on this episode in order to avoid spoilers, but there ya have it. The show did little for me, but I’m sure fans will appreciate having this set in their collections. I can’t imagine it having strong replay value, though.

As with previous seasons of the show, Falling Skies is presented in a 1.78:1 AVC HD image that’s easy on the eyes and certainly indicative of a science fiction show.  The palette here seems to be void of a lot of color, giving it more of a cool and corporate look and feel.  Flesh tones, likewise, seem a bit on the undersaturated side though the detail is impressive. The line between television shows and feature films continues to increasingly blur and this latest season of the show is proof of that.

The previous two seasons have showcased a Dolby TrueHD mix, but this latest season offers up a DTS HD Master Audio mix that doesn’t sound half bad.  I’d just mentioned that the line between films and TV have become blurred in respect to video, but as good as this sounds on television, I think a feature film would amp up a few of the scenes a bit. Vocals are strong and crisp, surrounds are used sparingly but we do get some gunshots and action sequences here and there. All in all it’s a nice mix and viewers won’t be disappointed.

True fans of the show will like the supplements included and after watching some of the supplements with Will Wheaton (yes, Wesley Crusher himself) I have to say that his passion for the show is contagious. 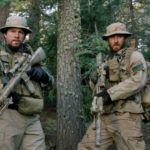