Raoul Duke (Johnny Depp) is a doctor of journalism, which means he attends newsworthy events, runs up enormous hotel bills, takes ungodly amounts of narcotics, trashes his hotel room, and then skips out of town before it all catches up with him. In his latest assignment, Duke is to head off to Las Vegas, where an important motorcycle race known as the Mint 5000 is to take place and of course, Duke is pen an article on the event. On the advice of his attorney Dr. Gonzo (Benicio Del Toro), a Samoan with a hard edge, penchant for blades & mood swings, and a love for drugs of all kinds, Duke accepts the gig and the two trek to Las Vegas. In their red convertible, the two journey through the desert, where Duke sees giant bats thanks to the drugs and an encounter with a hitchhiker (Tobey Maguire) livens up the trip. By the time they arrive, Duke is hardly able to speak or stand, but Gonzo intervenes and they wind up with a suite, as well as a ton of room service they don’t intend to pay for. In between brief moments of work, the two take every kind of drug known to man and somehow end up in the middle of insane situations, from lizards drinking booze to an underage girl who fixates on Barbra Streisand to the smug photographer assigned to Duke to all points in between. Can Duke and Gonzo survive the madness that overtaken their lives, or will this trip to Las Vegas be their final excursion?

The first time I saw this film, I wasn’t that impressed and felt let down, but over time, this one has grown on me, to say the least. “Fear and Loathing in Las Vegas” isn’t a masterpiece of traditional theater, but it has some insane visuals, a chaotic texture, and some zonked out performances that are a blast to watch. Unlike most folks, I actually enjoyed the other Hunter S. Thompson picture, Where the Buffalo Roam, but as time has passed, this Terry Gilliam directed take has won me over and surpassed that rendition. You have to be in the right mindset here, since much of this movie is nonsense, drug fueled paranoia, and sheer lunacy, but sometimes that is just what your attorney should advise you to experience. The repetitive nature is obvious, with Duke and Gonzo getting looped and getting into different situations, but since that remains close to the original material, you can’t fault the movie there. And in most sequences, the outrageous humor comes on strong and as such, “Fear and Loathing in Las Vegas” works as intended. In addition, the film is an excellent adaptation of Thompson’s book and without question, if you’re a fan of his writing, you will love this cinematic take. I have become quite taken with this movie and with a deluxe new two disc set from Criterion, its an easy and very high recommendation.

I don’t think you can this an award level performance in traditional circles, but Johnny Depp is quite good here as Hunter S. Thompson’s Duke. No, he isn’t able to bring across all the brilliance of the work, but he is terrific and I doubt anyone else could have done better. If nothing else, he looks eerily like Thompson and that provides an instant net of realism, even if his ever present cigarette causes some vocal troubles. Then again, given the amount of drugs he consumes in the role, perhaps clarity of dialogue simply wasn’t in the cards here. Depp has taken a wide, eclectic sampling of roles in his career and here, he adds yet another wildcard to his resume, as he is in almost a drug coma in this one. His mannerisms are hilarious and while some folks wouldn’t find all the drug use to be humorous, within this story, it is and then some. Its a shame that more of Thompson’s wit doesn’t surface in Depp’s performance, but then again, Thompson’s writing usually came after he’d come down, not in the midst of a full scale drug binge. Other films with Depp include From Hell, Edward Scissorhands, Sleepy Hollow, Cry-Baby, and The Ninth Gate. The cast also includes Benicio Del Toro (Traffic, The Usual Suspects), Craig Bierko (The Long Kiss Goodnight, The Thirteenth Floor), and Christina Ricci (The Addams Family, Pumpkin).

Criterion has given “Fear and Loathing in Las Vegas” a very nice-looking 2.35:1 AVC HD transfer. This is an upgrade from the previous standard DVD transfer used for the Criterion standard DVD a few years back. As this movie plays like one long acid trip, the visuals are insane and by turn, that means the transfer has to work overtime to keep the elements in line. As supervised by Gilliam, this treatment is superb and allows all the vivid colors to flow in rich hues and that enhances the experience to no end, as this one is loaded with colors of all kinds. The hues never go over the line however, they simply become as rich as possible, then halt before oversaturation is an issue. The print is never a problem here either, as it looks very clean and shows no signs of debris or damage, which is expected, since this is still a pretty recent release. No problems with contrast in the least, as black levels are smooth and stark at all times, never out of balance. This movie relies a lot on its visuals and with this new presentation, it looks better than ever.

In addition to the new transfer, Criterion has given the title a new DTS HD Master Audio mix. At first glance, you might not think this movie has serious audio potential, but it does and thanks to these new mixes, it all comes across in eerie fashion. Yes, those bats swoop down, the reptiles hiss, and the atmosphere of Las Vegas comes to life, with ample surround presence to make it happen. I mean, this is a movie about a ton of drug use and the chaos that ensues, so you know the audio is going to be as weird as the material, so I commend Criterion for their work here. The dialogue is often hard to understand, but that’s part of the film’s scheme and no fault of the top drawer audio treatment found here. This is not an all out power experience, but it has a lot of atmosphere and presence, to be sure. This disc also includes English subtitles, which might come in very handy in this case.

This Blu-ray is essentially a rehash of the previously existing standard DVD (that edition had two discs). Here you’ll find not one, not two, but three audio commentary tracks and believe me, there isn’t a bum session in the bunch. The first is with director Terry Gilliam and as always, he provides an insightful track and delves into the production, revealing why certain choices were made and such. He also talks about how the project was changed to his own hands, which is an interesting few moments. Next is a session with stars Johnny Depp and Benicio Del Toro, who give us more of an actor’s perspective on the production, especially on the trials & tribulations of being in such an offbeat picture. The final track is with producer Laila Nabulsi and Hunter S. Thompson himself, which is an invaluable addition to this release. But don’t expect too much from this track, as Thompson meanders a lot and gives short, slanted answers to Nabulsi’s questions in most cases. Even so, it is very cool to have Thompson’s thoughts on this movie included here and Nabulsi makes a solid moderator for his thoughts. We also get a selection of deleted scenes, with optional comments from Gilliam.

Delving further, we find two sections, “The Film” and “The Source.” In “The Film”, you’ll find some extras that deal with the production and such, such as some correspondence between Thompson and Depp. Here, Deep reads selected letters between the two, as Depp prepared to portray Thompson on screen. I find this video approach to be much more rewarding than simple text, especially since Depp is able to read the letters with solid presence. The notorious dispute over writers’ credit is covered also, via an audio discuss with Gilliam, Nabulsi, and cowriter Tony Grisoni. This is an interesting piece, as you don’t often hear such candid remarks about how the system works. A short film made by Gilliam called The Dress Pattern pokes fun at the premise and here, you can listen to Gilliam’s thoughts on an alternate audio commentary track as well. Hunter Goes to Hollywood is a brief look at Thompson’s visit to the film’s production, as shot by filmmaker Wayne Ewing, who is working on a full length documentary on Thompson. This section also houses a selection of storyboards, some production sketches, seven television spots, some still photos, and the film’s theatrical trailer. As an added bonus, Gilliam’s comments on the trailer are available on an alternate audio track.

Now we move on into “The Source”, which offers a glimpse at the inspiration for this movie, the real life elements behind the madness. The man known as Dr. Gonzo was Oscar Zeta Acosta and here, you can browse a photographic biography, listen to Acosta read a chapter from one of his books, and even listen to Thompson lend his thoughts on his friend. These make notable inclusions, as those who don’t know much about the real story behind the film can gain a lot by learning more about the real Acosta. Next is a section from the audio CD version of Fear and Loathing in Las Vegas, in which an all star cast bring Thompson’s book to life. The featured scene is one not shown in the feature film itself, which adds to its value as a supplement. Perhaps the best extra on this entire set is Fear and Loathing on the Road to Hollywood, a 1978 BBC documentary that follows Thompson and artist Ralph Steadman on a trek to Hollywood. This is a feature length piece that shows the real Thompson in living color and after you’ve seen this, you’ll have much more respect for how dead on Depp’s performance in this main feature is. Rounding out the extras is a gallery of Steadman’s artwork, with notes to fill in the blanks. 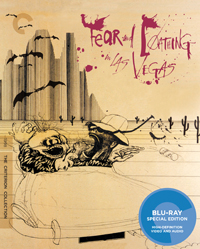