In 1972, Francis Ford Coppola crafted what is still, 36 years later, the quintessential mob movie with The Godfather, a film so crammed with staples of the movie mafia genre that one seeing it fresh today might mistake it as being wholly derivative. But then, this was the film that created all of the gangster cliches. What’s so astounding in watching it again now in 2008 is just how timeless a work of art it remains. Since the film is set in such a distinct and defined period in time, it has managed not to age a single day since its original release. Marlon Brando’s Oscar-winning performance as Don Vito Corleone is so powerful and authoritative, in fact, that it overshadows all others that have come in its wake. James Caan’s Sonny is as passionately hot-headed today as ever, and watching him again in the film makes me wonder why his career wasn’t even more successful than it ultimately was. And then there’s Al Pacino. In what I consider to be the performance – and, indeed, the role – of his career, Pacino plays the ill-fated Michael with so much restraint and barely-contained intensity that he somehow manages to carry virtually the entire emotional weight of the trilogy on his shoulders, even with some of the finest actors and performances in history surrounding him on all sides. The cinematography is possibly even more impressively subtle in its execution looking back on the film today than it was when it was initially shown.

There have been far more discussions these days about the role of composition in storytelling, and it’s hard to watch The Godfather (or its sequels) without appreciating the role of visuals to pull its audience into the narrative, right from the very first shot. Speaking of narrative, not much can be said about any of the Godfather films that hasn’t already been said a hundred times over, but for what it’s worth, the first film could be seen as the second act of a three-act play. Brando’s Don Vito heads the Corleone family, one of the most powerful crime families in New York. His three sons (Michael, Sonny, and Fredo) all bring wildly different sensibilities to the table, with the reluctant and calculating Michael ultimately taking over the reigns toward the end of the film. In a nutshell, that is the main plot of this three-hour epic. What makes it watchable despite its running time and relatively straightforward storyline are the aforementioned excellent performances and the almost endless nuances to be savored from them upon each and every viewing. Michael’s slow transition from the son who wants no part of the family business to one of a cold, manipulative Don who will stop at nothing to secure and cling to his power is gradual enough over the film’s running time to be wholly convincing and terrifying, an idea expounded upon in the second act.

This description has been taken from our review of The Godfather: The Coppola Restoration Blu-ray. This 45th Anniversary disc features the same technical specifications as those included on those discs.

As anyone reading this is no doubt aware, The Godfather has never looked very good on home video. In fact, that’s a pretty drastic understatement. Virtually all of the previous releases of the films, be it on the various laserdisc versions back in the 1990’s, have been extremely disappointing, ugly affairs that showed off pretty much every video issue imaginable. They were overly dark (even for inherently dark films), sported detail that was fair at best, contained a distracting amount of artifacts, showcased variant black-level issues, and even threw in a little edge-enhancement for good measure. Though these films will likely never look as though they were filmed yesterday (short of corrupting the source with excessive amounts of DNR and unwanted digital manipulation), this new AVC presentation is nonetheless quite revelatory in its own right. Those used to the dirty, dingy quality these films have always displayed at home will undoubtedly find the most to appreciate here. Artifacts have been nearly (if not completely) eliminated this time around, and the contrast has been given a boost for a much “warmer” feel in general.

Fine detail is vastly improved over any previous version of the films, and black levels are thankfully deep and dark, with not a single waver into gray or blue to be found, even in the trilogy’s numerous, previously problematic fades. The edge enhancement that plagued the previous DVD has been fully eradicated here. These improvements, while perhaps small on a point-by-point level, have a cumulative effect of giving the entire saga a fresher, cleaner, and more refined look and feel. This Blu-ray release finally does that experience justice in a home environment. While none of the films sparkle with that HD clarity that comes from newer features, those expecting that are quite frankly being unrealistic. These movies aren’t exactly new, and though they aren’t top-tier demo-worthy presentations, kudos must go out to Zoetrope Studios and Robert Harris for staying true to the spirit of what a good restoration is supposed to be without resorting to the evils of DNR. Grain has been meticulously and gloriously preserved here, yielding a surprisingly film-like appearance. A side-effect of this is, of course, a softer-looking image than on some HD titles. The source materials, for all the obvious work done to them, are still not in the best condition, and some scenes do betray this fact. Take, for example, the scene in the first film in which Michael greets Kay after returning from Sicily. This scene definitely looks sub-par, but then, that’s the nature of the beast, and the new HD presentation does reveal the limitations of the material in similar moments throughout the trilogy. Conversely, the many of the scenes of the Italian countryside are much more well-defined and lifelike.

As impressive as the video is the audio honestly impressed me even more. This isn’t an “impressive-sounding” mix per se, but again, those used to the previous releases will certainly notice a definite difference in overall fidelity, clarity and ambiance in these new TrueHD soundtracks. The gunfire is now just as jolting and loud as it should be, with directionality and ricochet effects that cascade all over the sound field. No doubt, this is how the scene was intended to sound. It’s as surprising an audio experience as the scene is from a storytelling standpoint. But then, that’s what I find so wonderful about the mix on all three films: they compliment the onscreen action impeccably. The quieter scenes, though mostly dialog-driven, have a fullness to them that simply wasn’t there before, and I never got the impression (as I always have before) that the sound was either tinny or limited in dynamic range.

Words and sound effects are equally intelligible, and there’s an air of atmosphere that now fills the proceedings through the employment of lossless audio that is more a visceral perception than a definite, technical aspect of the sound itself. All in all, this is an absolutely top-notch effort (especially for the two films that originated with mere mono mixes). Now, again, these movies will never sound like the best demo discs out there, and they’re not meant to. But as with the video, the audio presentations here are nothing if not respectful of the respective films they support. The best accolade I can bestow upon the new audio is that they never sound forced or gimmicky in the slightest bit. It’s instead as if the saga was always meant to sound this way. Even the purists should find something to admire in the faithfulness afforded here to the original source tracks. Having owned all three films on VHS, laserdisc, DVD, and now Blu-ray, I can say with assuredness that you have never heard this trilogy sound this clean and natural. Excellent.

If you already own The Godfather: The Coppola Restoration on Blu-ray, there’s no need to purchase this disc. This is merely a single disc re-issue of what was included in that set. In essence, it’s a way for Paramount to capitalize on this movie once again. If, however, that disc isn’t a part of your collection and let’s say you’re not a fan of Part III, well this is the perfect opportunity to add this to your collection cheaply. 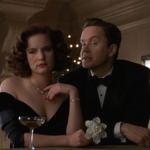 The Hudsucker Proxy (Blu-ray)
Next Article