As the conflict in Vietnam pushes on, the troops have lowered morale thanks to the longer than expected campaigns and broken promises. In an attempt to boost spirits and provide some entertainment, the Army brings in radio personality Adrian Cronauer (Robin Williams). As it turns out, he was just what the troops needed, as the men love his show and can’t get enough of his humor. Cronaeur is over the top and wild, never afraid to speak up or play the hottest new rock & roll from back home. As much as it pleases the troops, some of the officers disapprove of his humor and choice of music. Will he be forced to tone down his show, be taken off the air, or be allowed to do what he does best?

I tend to check out films based in the Vietnam conflict, as that event is of great interest to me, but this is one I could never appreciate. Good Morning, Vietnam was showered with praise and star Robin Williams was even nominated for an Oscar, but I’ve never cared for the picture. Although based on a real life story, the movie never tries to stay grounded in realism for even a moment. Williams is too over the top in the lead, as if the filmmakers just told him to improvise for hours and hours on end. If you like Williams’ brand of humor, then you’ll like those scenes, but when the film tries to be dramatic, it sinks like a stone. We’re left with a very uneven balance of manic and disjointed elements.

As the Blu-ray movies delve deeper and deeper back into the catalogs of the studios, we have to wonder if purchasing (or re-purchasing) titles we most likely already own is really worth it. “Good Morning, Vietnam” certainly does benefit from the new 1.85:1 AVC HD transfer that really does add more detail and depth to the film. Colors appear a bit more bold and though there is a bit of DNR (most notable in a scene in a close-up of Robin Williams), it’s not overdone. The film retains its film-like quality and is an improvement over the standard DVD that came out in 2006.

There’s a noticeable improvement with this new DTS HD Master Audio soundtrack. By and large, the movie is driven by the 60’s soundtrack and Williams hyper vocals. There are a few scenes in which some actual “war” effects take control, but they’re very few and far between. Dialogue seems clean and sharp and without any distortion.

There’s nothing new on this Blu-ray (a sad comment on what some of the studios give us) but the Production Diary from the DVD did make the leap and is a fairly notable feature. We also get around 15 minutes of Robin Williams’ monologues (again, these were present on the special edition DVD). Also included is the original theatrical trailer. Two, actually. 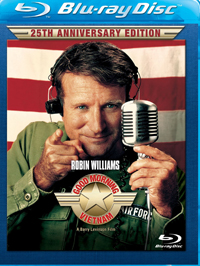