Actor and director Clint Eastwood has been making movies for quite some time now. For 35 of those years he’s been directing films for Warner Brothers and the result has been quite good on both ends. In 1992 his “Unforgiven” won Best Picture and a dozen years later he accomplished this feat again with “Million Dollar Baby.” Yes, I think Warner is quite happy with Mr. Eastwood and I’m sure the sentiment is reciprocal. Eastwood’s movies as of late have been somewhat, well, depressing. That’s not to say they’re not good, but films like the aforementioned “Million Dollar Baby”, “Mystic River”, “Gran Torino” and his latest “Hereafter” haven’t really been upbeat. Then again this is “Dirty Harry” we’re talking about, so we know that he’s not always smiles and sunshine. Still, “Hereafter” is somewhat of a departure for Eastwood and having had a few days to reflect on it, it kind of grows on you.

There’s not a true linear plot with “Hereafter” in that it’s essentially three separate storylines that (we hope) will eventually intersect. We first meet Marie Lelay (CÃ©cile De France), a French journalist on vacation with her producer (you connect the dots) when a tsunami strikes. Ironically enough, I viewed this on Friday, March 11 – the same day a tsunami hit Japan in the “real world.” Scary. Marie is near death and sees visions, but is brought back to life. We then encounter twins in England, Marcus and Jason (Frankie and George McLaren). Jason is killed in an accident and Marcus tries to find meaning his brother’s death all the while trying to take care of his alcoholic mother. Lastly we meet George Lonegan (Matt Damon), a man with genuine psychic powers. But he’s given up trying to make money off them due to the emotional toll they take on him. Despite the efforts of his brother (Jay Mohr) to cash in on them, George is happiest working at a sugar plant. It’s interesting, yet somewhat frustrating, to see how these stories intertwine.

We all seem to know what will happen in “Hereafter”, just not how. Some people want immediate payoff and others are rewarded for their wait to see it. Eastwood has a deliberate pace and tone here, intersecting the trio of stories at just the right time. We see enough of the characters to know a bit about them and even to care for them, but we’re not so invested in them that it feels like an eternity (pardon the pun) before we get resolution. “Hereafter” left audiences polarized and, as I mentioned before, I’ve had a few days to digest it and rather like it. It doesn’t try to be too existential but at the same time doesn’t take itself too seriously. The cast, aside from Jay Mohr and Matt Damon, is relatively unknown and they take a backseat to the story at hand. While no one knows what the afterlife brings, I rather like Eastwood’s interpretation of it. Who knew “Dirty Harry” had a soft side?

Eastwood has shot most all of his films in a wide, 2.40:1 aspect ratio and “Hereafter” is no exception. The AVC HD transfer looks positively outstanding even given the subdued nature of the transfer and color palette. Each story seems to have its own mood and I was reminded of “Traffic” in which every story had a different palette used. Detail is razor sharp, black levels are on spot as is contrast. The CGI tsunami looks very realistic and given the amount of real-life coverage we’ve seen over the past few days, I’d say this is eerily similar. Truth be told, this is a major release from the largest studio and we’d expect it to look its best on Blu-ray. And it does.

The audio is a bit disappointing here. I don’t fault the soundtrack for sounding light as that’s the way it was meant to sound, but there are only a handful of instances in which the surrounds really came into play. Dialogue seems a bit on the softer side as well, so much that I had to turn it up a couple of notches. This isn’t one of those “in your face” soundtracks, but rather very subtle. I don’t fault the Blu-ray itself, but rather the source material. It’s not bad, just don’t expect for it to blow the roof off your place.

When it comes to supplements, “Hereafter” doesn’t really spot a whole lot. What we get are nine “focus points” in which Eastwood somewhat interjects with some comments here and there. This is good in the sense that Eastwood doesn’t usually provide commentary tracks for his films, so we’ll take what we can get. Moreover, the biggest selling-point of the disc is “The Eastwood Factor: Extended Version.” Running as long as the movie itself, this is the first time this has been shown in HD and we get an insightful look at Eastwood, his films and storied career. This is, of course, narrated by Morgan Freeman (who else?) and directed by film critic and longtime Eastwood biographer, Richard Schickel. This alone might be worth the cost of admission. 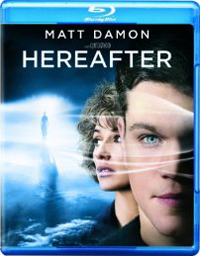