It’s hard to believe it’s been eight years since Vince Vaughn and Owen Wilson were last seen on-screen together. The two actors have done plenty of roles since 2005’s Wedding Crashers, but for whatever reason it took them a good eight years to star together in another film. The Internship not only failed to bring in the big box office receipts of Wedding Crashers, but was widely panned by most critics. Did it deserve such a fate? I’d have to say no. It is certainly an inferior film when compared to their earlier effort, but it is also still a lot of fun in its own right. Sometimes expectations can be killer and the eight year gap certainly didn’t help. Taken on its own terms, however, the film is fast paced, mildly amusing and the two leads have enough chemistry to carry us through it all. Things aren’t going so well for Billy McMahon (Vince Vaughn) and Nick Campbell (Owen Wilson). The modern world is putting a damper on their careers. They both play salesmen here. After all how many of us still wear a wrist watch? Billy decides to apply for an internship at Google. After many attempts, they finally get at in at Google. The film has a lot of fun with some of the tasks that each team has to do before moving through to the next level. Early on, the other interns grow tired of the two leads endless banter that they send them to seek a Professor Xavier. This sequence is funny as the two approach a bald man in a wheelchair. I do have to wonder how they’ve never even heard of X-Men in some form, but that’s beside the point. You won’t find many variations with the two main leads here. Vaughn is playing his usual fast-talking self while Wilson plays the more reserved of the two. This isn’t a complaint though. These guys are almost always fun to watch and are believable as sales people here. The two of them have such a natural, easy-going chemistry that I could see myself being friends with them.

The plot is relatively straight forward and we can pretty much see where it’s headed early on. That hardly matters because sometimes its about the journey and not the destination. The journey is a lot of fun too. Vaughn and Wilson are clearly having a good time, but so do we (the audience). A small subplot develops involving Owen Wilson and the Rose Byrne character. The two of them work well together, but the central plot is far more interesting. Still, this is only a mild distraction in an otherwise solid film. The supporting cast also does a nice job. They all fit the roles nicely and play off Vaughn and Wilson nicely as well. Usually I wait for the supplements section to mention additional scenes, but this disc not only includes the theatrical cut, but also an extended unrated cut. I did some online research and discovered that some scenes were filmed twice. Some takes were used for the PG-13 theatrical cut while others were used for an R rated (or in this case Unrated) cut. I must say that the unrated is definitely the way to go. I don’t see myself ever returning to the theatrical cut other than to compare, but even then it’s unlikely. The changes are subtle, but I think they more than work in the film’s favor. There’s nothing too vulgar here, but there’s a more natural vibe to the thing. Some of the lines have an added edge to them. I am curious if maybe the film were released in an R rated form would it have been more successful. I am guessing many saw the PG-13 rating and steered away because they were expecting another Wedding Crashers. I will probably never hold this film in as high regard as Crashers, but it’s still a lot of fun and very much worth watching. If there were any fears that this would become a long commercial for Google, fear not. It simply acts as the backdrop to a very funny and entertaining film.

While I will likely never consider a comedy for a reference-quality disc, the image here is still very nice. Fox provides us with an AVC encoded 2.35:1 transfer and it’s spot on. Colors are always deep and accurate, facial expressions and features show strong detail and clarity. There’s really nothing to complain about here. The Google building has many colorful aspects to it and they all come out very nicely here. I could make out individual curls on a few of the actor’s heads and the lipstick Rose Byrne wears in a few scenes comes out very nicely with a deep red. This is a very strong transfer and I have really nothing to fault it for.

Again, don’t expect this disc to be used to show off your system, but it still serves the film well. You can probably guess that the DTS HD 5.1 track is mostly dialogue driven and front loaded and you’d be right. The front channels do make up the majority of the track, but that’s OK. The vocals are always clear and precise and when the rear channels are needed, they come out nicely. There’s an outdoor game that shows strong range as well as a nightclub scene that makes good use of background noise. So, this track will please fans of the film just don’t expect it to knock your socks off. It won’t.

I mentioned the inclusion of both cuts of the film (stick with the Unrated) but Fox has also given us a few more decent extras as well. There’s also an insert for a UV digital copy as well as a second disc with the DVD and a digital copy for Itunes. It amazes me that Fox still uses a disc for a digital copy transfer. The UV obviously doesn’t need one, but the Itunes version requires it. I just find it odd that they’re one of the last (if not last) studios to use this method. 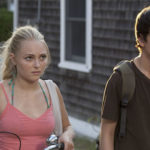