Over the past decade and a half Christopher Nolan has established himself as one of the premier Directors. That’s a bold statement as the film industry has a lot of talent out there. Maybe a better phrasing would be “…has established himself as one of the most consistent Directors.” Beginning with Memento in 2000 where we met a man who suffered from short-term memory loss, he helmed the reboot of the Batman franchise. A few billion dollars later he blew our collective minds with the aptly-named Inception. So when it was announced that he’d direct the long-awaited Interstellar, which once had Steven Spielberg’s name attached to it, people took notice. It didn’t hurt the film with a freshly-crowned Oscar winner by the name of Matthew McConaughey in the lead role, either. With Nolan’s attention to detail, his own brother (Jonathan) as co-writer and a top notch cast – the die was set.

In the near future the Earth is suffering from a drought. The “Dust Bowl” that happened in the mid west in the 1930’s has become a worldwide problem. Crops are drying up and huge dust storms are commonplace. Farmer/Engineer Cooper (Matthew McConaughey) and his family aren’t immune to the climate changes, either. However, it so happens that they discover some sort of code that leads Cooper to the headquarters of NASA. He’s informed that they’re sending a shuttle into space to try and solve the drought on Earth. Cooper, along with a skeleton crew, head off into the bowels of space and head for a wormhole that will allow them to travel beyond our solar system. The odds of survival are slim. Will Cooper and his crew be able to navigate the dangers of space and save the Earth or are they doomed?

Granted that’s a very high-level look at the film which spans nearly three hours. To go into full detail about all the nuances would take forever and I certainly don’t want to spoil the plot for those that haven’t seen it. I think what I like best about Christopher Nolan’s film is that they make you think. Yes, there’s the beautifully-shot scenes and the amazing soundtrack (more on that below), but as a viewer you feel like you’re more a part of something than just a passive observer. The film wasn’t quite the financial hit that Warner and Paramount thought it would be, though it did gross nearly $200 million at the domestic box office. Then again, the run time probably had something to do with that as well. There’s really nothing not to like about Interstellar – the cast is fantastic, the plot is actually believable. Admittedly I still prefer Inception to this, but seeing this film is all it’s cracked up to be. I can’t imagine anyone will be disappointed.

As Nolan did with a couple of the Batman films, this contains a mixture of aspect ratios. Nolan is as old school as they come and used a film camera as opposed to a digital one that most filmmakers use. Given that, the 1.78:1 and 2.40:1 images have a fine layer of grain on them, but still manage to look absolutely incredible. It’s no secret that Kubrick’s 2001: A Space Odyssey is the basis for most of this film and there’s a lot of that film in this one. Detail is incredible, textures in the suits are easily visible, text on the computer screens are legible and facial (im)perfections are noticeable. This Ultra HD version manages to add a fine layer of color (via HDR) as well as some more detail and texture to the image. It essentially epitomizes what this new format is all about. In most instances (films), it’s hard to tell the difference between a Blu-ray and a 4K offering. But here, if you were to do an A/B comparison, you’d notice almost instantly. This is flat out amazing.

Science-Fiction movies in general are pretty heavy on the audio and this is certainly not an exception. the DTS HD Master Audio track is one of the most immersive and powerful I’ve heard in a while. Hans Zimmer’s beautiful score isn’t what we’re used to and by Nolan’s direction, has a bit of a retro feel to it. The music seems to float from speaker to speaker with the greatest of ease. Vocals are rich and pure, though I really wish McConaughey would annunciate his lines a bit more. I had some noticeable trouble trying to understand what he was saying. With some of the more action-oriented scenes, it’s no surprise that the speakers come alive, the LFE fire up and shake the room. It’s a break taking experience and one that not many films can pull off.

This three disc set contains two of the discs, each containing a movie (the Ultra HD on one and the Blu-ray on the other). The special features are all found on the third disc.

Though I personally preferred Inception to Interstellar, both are amazing films. Christopher Nolan has crafted a thought-provoking film that’s grandiose on pretty much every scale. Top notch special effects, amazing video and audio quality along with some great performances by a very talented cast. The set has enough supplements to warrant a purchase and delivers the goods on every level, not to mention that the video has been improved (I’d not thought it possible) from the Blu-ray which is also included. Highly recommended. 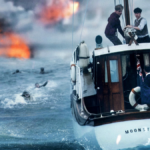 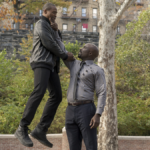