Comedian Daniel Tosh really cracks me up and in one of his performances, he’s got a joke that goes something like this…”Do you ever fantasize about what you’d do if you won the lottery, but the thought of actually buying a lottery ticket has never actually occurred to you?” That, to me, is funny. “Lottery Ticket” is not. I have to admit that the trailer did a pretty good job at making me want to see the movie, but I hardly ever get out in theaters any more because, well, of this site. About the only thing that really resonates from the trailer is Stevie Wonder’s “Sir Duke.” Yep, that’s about it. And now a short 60 some odd days later I’ve got a copy of “Lottery Ticket” in my hands. What’s it about you ask? I should just link to the trailer on YouTube and save you (and some brain cells), but I do feel obligated to do my best to review this movie. So without further ado, here we go.

Kevin Carson (Bow Wow who I guess used to be called “‘Lil Bow Wow” but now that he’s older has dropped the ‘Lil’) lives in the projects. He’s just purchased a winning lottery ticket that totals nearly $400 million dollars. Naturally this will change his life and those who are close to him. Kevin doesn’t have a lot of money and his job at the Foot Locker isn’t exactly fulfilling. Kevin’s grandmother (Loretta Devine) is trying, as is everyone else, to win the Mondo Million Dollar lottery. But, as fate would have it she doesn’t, but Kevin does. But it’s the Fourth of July weekend and the lottery office is closed so he must wait out the weekend before he can cash the ticket. Neighborhood bully Lorenzo (Gbenga Akinnagbe) would love to get his paws on it as well. As word gets out about the ticket, people come out of the woodwork. Is this human nature at its finest or is there a lesson in all of this. Without spoiling it, I’ll say that “Lottery Ticket” contains no moral compass. The characters are paper thin and you’re a bit better off watching paint dry than watching this “film.”

Factoring out the subject matter of “Lottery Ticket”, the 2.35:1 VC-1 HD transfer is actually very good. Colors are bright and the movie has a clarity that is indicative of a day and date Blu-ray release. Contrast and Black levels are both up to standards and flesh tones look adequate. I didn’t compare this to the standard DVD and I won’t take the time to do so. But if “Lottery Ticket” is your cup of tea, then you’ll be more than pleased with how this looks.

The DTS HD Master Audio soundtrack is surprisingly very ample here as well. The film has a somewhat decent score and soundtrack and LFE are very active. There are times when the action is bumped up a notch or two and the speakers compensate for it. Dialogue is very crisp and clear and though most of the action is front heavy, the surrounds do become involved. This was the lone bright spot in the film for me.

There’s a sampling of supplements on this Blu-ray starting off with “Custom Kicks” focusing on the character of Kevin and his passion for shoe design. “Junior’s Guide to the Corner Store” hosted by T-Pain with some cast and crew interviews and their respective roles in the film. “Everybody’s In: Casting for ‘Lottery Ticket'” focuses on the ensemble cast and everyone patting one another on the back for their respective roles. “The Du-Rag Model” gives us Bill Bellamy (yes, he’s still around) as he gives us the down low on his character and his fondness for the du-rag. Finally some deleted scenes are shown as is the trailer. 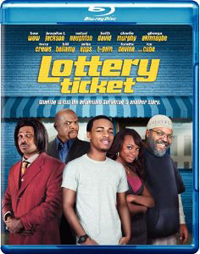