Adrien Brody plays a Porter Wren, a New York City tabloid writer with an interest in hot topic stories. He acts as the narrator here as well. The film is a clear throwback to film noir, and it mostly succeeds thanks to a fairly intriguing setup. Wren gets an interest for a young and attractive widow partly because he’s bored and partly because he might sense a story here. Yvonne Strahovski plays Caroline Crowley. She’s quite easy on the eyes, and naturally, Wren develops an attraction towards her as well. We learn (through flashbacks) small fragments about Caroline’s late husband and how it may play into the larger picture. I won’t dive into too many specific plot points to avoid spoilers, but it would hardly matter as the plot can get overly complicated at times.

I’ll confess that I’ve never been a huge fan of Adrien Brody, but he does a decent job here. I do wonder what another actor would’ve brought to the role, but there’s nothing particularly terrible about his performance. The film has the right ideas, but the pacing is a bit too slow for my taste and story a shade too confusing. I was interested in how it would all end, but some details were a little sketchy. It’s been said that New York can often act as a character in and of itself, and that’s true here. It really helps establish a mood. Ultimately, I won’t say the film completely won me over, but it didn’t leave me cold, either. Sharper direction and tighter pacing would’ve helped matters here. As it stands, it’s an interesting piece of work that won’t leave you feeling like you’ve wasted too much time watching it.

We get a strong transfer here that adds to the overall look of the film. Being set in New York, the transfer does a good job of showcasing what life in the city is like. There are strong details throughout and colors appeared natural and smooth. I couldn’t detect many flaws here. Fans of the film should be pleased with the results here.

We get a worthy track here. Vocals are strong and clear, and the background channels get used appropriately. The busy city life adds some nice details here and there as well. All things worked to create a rich experience that accompanies the film well.

While hardly essential viewing, there’s still enough that works in the film’s favor that it earns a light recommendation. The pacing is a bit too slow, and the plot confusing at times, but the noir style is welcome. 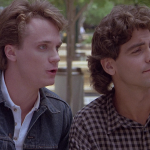 Return of the Killer Tomatoes (Blu-ray)
Next Article 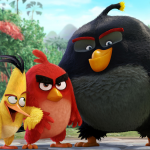