A few years ago on a weekend of a hot June summer, I was working the entire day of an Irish Fair, so far the only year in the few years that it has been run that both days of it were sunny. As I had come back from working, I had noticed the widescreen debut of a western classic coming onto one of the classic movie channels. From the moment it started with its long title sequence, it was a true channel locker. It hooked me in a way that was hypnotic and I just couldn’t describe what grabbed me but I wanted to know at each moment what happens next and for 2 hours and 45 minutes, it was a welcome end to a hard working day. That movie was Sergio Leone’s “Once Upon a Time in the West” and it’s story and its characters spun quite a tale.

Once upon a time, there were three men (Woody Strode, Jack Elam, Al Mulock) waiting impatiently at a railroad station until a mysterious stranger with no name, whose only identification is the instrument he plays around his neck, appears as the railroad passes. They represent a man named Frank (Henry Fonda) who’s sinister methods are being applied at the other side of town and while these sinister acts are being pinned on a scruffy gunfighter named Cheyenne (Jason Robards), a young lady (Claudia Cardinale) arrives in town slowly but surely discovering her late husband’s plans for the future with Cheyenne, Harmonica and Frank hot on her trail for their own reasons and thus continues our journey into the Sergio Leone western that hangs, hooks, twists and goes the distance from start to finish and they all lived happily or unhappily depending on your point of view.

I admit there are two kinds of long length casually paced movies. There are the ones that the viewer ponders when the movie is going to end and there are the ones that go on and give you a curiosity of what’s going to happen next and this film is certainly a case of the latter. The less-is-more dialogue choice is a great one as the ensemble get some of the best introductions to their characters, accompanied by a haunting but memorable score by Ennio Morricone. In short, “Once Upon a Time in the West” leaves you with a great mark visually and never lets go from one scene to the next. It’s great to see a movie, especially a Sergio Leone western minus Clint Eastwood, that still holds up so well after so many years.

Paramount did a fine job a few years back with their standard DVD of this movie. Now that we’ve got it on Blu-ray, I was expecting big things. Thankfully the 2.35:1 AVC HD image doesn’t disappoint. Leone gives us the whole package with this film with the wide, gorgeous landscapes coupled with the close ups of the actors in some scenes. Detail is amazing, just consider looking at an aging Henry Fonda and the wrinkles in his forehead contrasted with the grey in his hair. Contrast and black levels work well together, giving a very smooth, film like look to the entire movie. There’s a bit of grain in some scenes, but considering the age of the film, it’s one of the better looking transfers I’ve seen.

This Blu-ray features a new DTS HD Master Audio soundtrack that sounds fairly good. Ennio Morricone’s score is at the heart of the film here and though a bit on the harsh end at times, it does resonate throughout the channels. Separation is clear, the whistles of the train, the drops of water on the hat and the like. They all sound good. Granted, the movie is over forty years old now so there’s only so much that can be done with the audio.

We’ve got good news and some not so good news with this Blu-ray. The good news is that this disc is loaded with extras, but the bad being that if you previously owned the standard DVD from 2003 – there’s nothing new here. We get the same audio commentary with directors John Carpenter, John Milius and Alex Cox. They’re joined (via splicing) by film historians Sir Christopher Frayling and Dr. Sheldon Hall. The trio of featurettes are also included: “An Opera of Violence”, “The Wages of Sin” and “Something to do with Death” as is “Railroad: Revolutionizing the West.” We also get a photo gallery and a comparison of “then and now” photos in regards to the location as well as two theatrical trailers. Lastly the “restored” version is included, though it’s only about a minute longer than the theatrical version of the film itself. 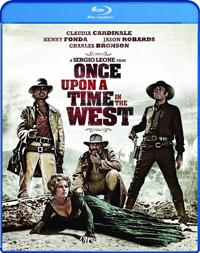