There have only been three movies in the history of the Oscars that have gotten what’s called “the big five”. The five consist of Best Picture, Best Director, Best Actor, Best Actress and Best Screenplay. It Happened One Night was the first and The Silence of the Lambs was the most recent, but in the middle was the big year of 1975 just when you were about to go into the water and deal with 24 individual stories in the city of the Grand Ole Opry, there was an entry that became #2 for “the big five” and those aforementioned movies all lost out to One Flew Over The Cuckoo’s Nest.

Randall P. McMurphy (Jack Nicholson) has just been admitted to a mental institution. There he encounters many patients with many problems, some of which can’t speak for themselves and others have more to say. Nobody knows whether McMurphy is normal and doesn’t belong or that he’s crazier than all the rest. He brings his fun and craziness to the patients and puts an intriguing effect on them, all except the nurse in charge, Nurse Ratched (Louise Fletcher) who believes his manor is putting a negative effect on all the patients and goes to different measures about the situation.

It’s interesting to see so many little known actors at that time have their film debuts with this film. All the performances right across the board are sensational and this viewer almost was convinced before they all made it that they were all residents of the asylum.

The film also spawns one of the most unique scores by Jack Nitzsche. The combination of unusual beats and sounds. It’s funny, heartbreaking, disturbing, depressing and uplifting but most of all it’s entertaining and you don’t have to go too cuckoo to like the Cuckoo’s Nest.

“One Flew Over the Cuckoo’s Nest” has always looked somewhat decent, though it’s never been the shining example of how films should look, either. The 1.85:1 VC-1 HD transfer on this Blu-ray is a fine improvement over the previous two-disc DVD and by that, most of the improvement is in the detail. Colors are bold and crisp, but the entire palette is very muted. Plenty of white abounds throughout, though it’s not as stark as one might think. So while this is an upgrade in terms of picture quality, it’s still not a title I’d use to say “Hey, this is how good a movie can look!” Not that you would.

The audio mix is a DTS HD Master Audio mix that sounds fairly good though, like the video, the audio has never really been the film’s main draw. Dialogue sounds good, and there’s plenty of “Jack” to go around. This is essentially a mono mix with some ambient surrounds thrown in from time to time for a little more emphasis. I did find that I had to turn up the volume from most of my other movie-watching, but due to the lightness of the track, I’m assuming that’s why. So like the video, this sounds fine but it’s certainly not Blu-ray at its finest.

If you already own “One Flew Over the Cuckoo’s Nest” in the previous version, there’s no new material to be found here. The same commentary track with director Milos Forman and producers Michael Douglas and Saul Zaentz is here and the three did record their tracks separately. We get the documentary “Completely Cuckoo” clocking in at 47 minutes that kind of trails the course of the movie from beginning to end. It’s fairly interesting, though I’ve certainly seen better. There are eight deleted scenes and we do get a new interview with Michael Douglas (the only new supplement to be on this disc). Also, this Blu-ray comes with a hardcover book and a deck of cards. So if you’re really into trying to be like McMurphy, this will get you on the way. The trailer is also included. 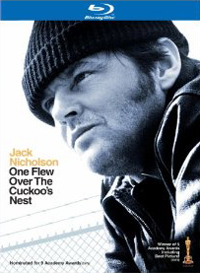