Oh my. Usually, when doing a review, I have some angle that I want to take in this ever so important (ok, it’s not that important) first paragraph. But somehow in a movie like this I just feel that all the rules might as well be tossed out the window. “Piranha” is the re-make of the campy cult classic from the days gone by. Did the movie or even the theme improve with age? Do you really expect a rational response? I sat down and watched this movie with my wife and two teenage step sons and looking back maybe this wasn’t the right course of action, but I figure by now they’ve seen a topless woman on screen. If not – they have now. So you like blood and guts? You like 3D? You like washed up stars from the 90’s? You like subpar special effects? Well then, my friends, “Piranha” is for you!

What “Piranha” lacks in plot it makes up for in skin, er make that silicone. Still, don’t let that deter us from what’s going on in the water. The town of Lake Victoria, Arizona (Lake Havasu, obviously) is gearing up for Spring Break where the town of 5,000 will explode 10x. There’ll be plenty of booze, bikinis and everything else to keep the college kids busy. Right in the middle of the action is Derrick Jones (Jerry O’Connell), a “Girls Gone Wild” sort of producer that’s interested in getting the ladies to do whatever they like to help sell his movies. He hires local boy Jake (Steven R. McQueen) to help him out, but Jake’s mother (Elisabeth Shue) is also the sheriff. As Jake and Derrick and a few scantily clad ladies head out into the lake, things start go awry. A deadly group of prehistoric piranha’s are on the loose and devouring everything in sight. Couple this with the fact that Jake has left his younger brother and sister and it’s not good news. Will they make it out alive or will the school of flesh-eating fish have their way?

For some strange reason, I think “Piranha” will be overlooked come awards season and it’s a shame. Ok, not really. The movie is a throwback to the teen/horror films of the 80’s and they do a pretty good job of re-creating that sort of film. Despite the campy nature of the film, it’s actually got a fairly decent cast with the likes of Richard Dreyfuss, Elisabeth Shue, Ving Rhames, Jerry O’Connell and Adam Scott to name a few. This is the epitome of the type of movie that you take with a grain of salt. If you make the mistake of taking any of it seriously, hit the stop button and go back to the beginning and start again. It’s clear that the filmmakers were out to have a good time and I think they succeeded. Yes, some of the scenes are a bit graphic but it’s in more of an “Evil Dead” sort of way. Sit back, enjoy yourself and, of course, don’t go in the water.

The 1.85:1 AVC transfer leaves a lot the imagination. And I mean a LOT. There are the obligatory shots underwater that look downright horrible. The featurettes said that the movie was filmed in Lake Havasu, Arizona and that the water was a bit murky. This translates to a lot of banding in the greenish/brownish hues and even a bit of pixilation in said scenes. The parts on land look ok, though the overall image seemed a bit oversaturated giving it more of a low budget look (then again, that might have been what they were going for). Yes, there are plenty of shots of women topless and we even see a segment of the male anatomy that I’m sure we could have all done without. The movie was clearly made for 3D and though this was the 2D version, it’s still watchable. Detail is fairly sharp and contrast seems a bit off. As mentioned, the worst scenes are the ones filmed underwater but aside from that it’s passable. It’s certainly not indicative of a new to Blu-ray film though. Let’s face it though, for this movie do we really care about how the image looks?

The DTS HD Master Audio soundtrack is fairly active at points, but mostly the film is dialogue-driven. We do get a bit of “Jaws-like” segments when the school of fish approach, but there’s a lot of natural ambiance mixed in the movie. This isn’t one to write home about, and it’s not supposed to be either. Surrounds are present, but not overbearing and it’s a good-sounding overall track, though nothing memorable.

There aren’t a whole lot of supplements on the disc, but the ones included are somewhat entertaining. We start out with a commentary by the filmmakers and you’d think they were making “Citizen Kane” or something. I’m always amazed at how serious these guys can be when looking at a body of work that looks like it was done by a teenager. Still, we get a lot of information on the shoot, the script and the actors involved in the film. We get a slew of deleted scenes and a series of featurettes that deal with everything from the script to the location to the gory “special” effects. There’s also a theatrical trailer as well as some PS3 Wallpaper if that’s your thing. 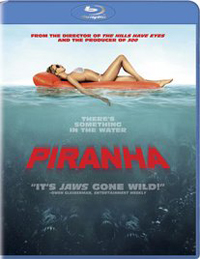