When young Chris Taylor (Charlie Sheen) arrives in war torn Vietnam to serve his country, he quickly learns that the war is about much more than fighting the Vietnamese. As he makes his rounds he is stricken with total fear of his situation, but he handles himself well and remains on his toes and survives his first night in the field. As time passes he soon learns that things are not like he imagined and the cause he fights for might not be so noble after all. He watches as innocent lives are destroyed around him and even sees serious tension within his own fellow soldiers. The main conflict arises between Sergeant Barnes (Tom Berenger) and Sergeant Elias (Willem Dafoe), both of whom have seen many tours of duty and wear the scars both mentally and physically. Barnes has taken his anger and frustration with war and manifested it in the form of ruthless violence, which means he has no problems with killing innocents and such. Elias on the other hand is just as battle worn, but chooses to remain positive and keep his faith in what he believes he is fighting for. As Chris is delivered orders from the two men, sometimes conflicting, he is forced to make a choice and decide which side of the war he fight on.

This film was written and directed by Oliver Stone, who used his personal experiences from Vietnam to guide his work on this film. Some of the events even happened to Stone and his personal experience is what gives this movie such a realistic feel and texture. Stone creates a very harsh and brutal environment to be sure, but I think that is what makes this such a powerful and memorable picture. Stone pulls no punches when it comes to violence and morally conflicting situations and that drives home what Stone is saying about war and morals. If you want a clean cut film about war then check out Saving Private Ryan, but if you want a powerful and realistic one then this is your flick. If you want to see more of Stone’s films I recommend Natural Born Killers, Any Given Sunday, Heaven & Earth, Wall Street, and JFK. While Charlie Sheen isn’t known for his dramatic acting, he gives the performance of his career in this movie. Sheen (Major League, Hot Shots) turns in a terrific performance here and I think it hints to what his potential might have been. Also very solid in this movie are Tom Berenger (Last Of The Dogmen, Betrayed) and Willem Dafoe (The Last Temptation Of Christ, White Sands), who bring the rivalry of their characters to life very well. The supporting cast also includes Kevin Dillon (No Escape, Hidden Agenda), John C. McGinley (Office Space, Three To Tango), Johnny Depp (Ed Wood, Sleepy Hollow), and Forest Whitaker (Ghost Dog: The Way Of The Samurai, Battlefield Earth).

We’ve seen nearly half a dozen installments of “Platoon” on disc format, but this 25th anniversary edition on Blu-ray is the latest and greatest (in regards to image quality). The 1.85:1 AVC HD transfer looks good with greens and earthy tones prevailing. There’s a bit of grain on the entire print, but looking back at the other editions – it was there as well. Odds are that “Platoon” will never be the shining example of a reference quality video transfer, but this does look like an improvement over the previous versions, for sure.

There’s a new DTS HD Master Audio soundtrack on this anniversary edition and it sounds pretty darn good. When it comes to war movies, it’s hard to top the king of them all – “Saving Private Ryan”, but “Platoon” does have its share of dynamic and atmospheric effects. There’s a great 60’s soundtrack to accompany the film and dialogue sounds a bit on the harsh side. Still, the audio experience isn’t a total wash and I’ll go so far as to say that this is the best that the film has ever sounded on a home video format.

MGM isn’t going to re-invent the wheel with this one, and odds are that if you’ve picked up one of the previous versions then you’ll have seen and/or heard everything the disc has to offer. We get the same dual audio commentaries; one by director/writer Oliver Stone and the other by Dale Dye (a military advisor on the film). “Flashback to ‘Platoon’: The Real Beef of the Set” is a 50 minute documentary that explored the period, why the film was made and so forth. It’s a good feature and if you haven’t seen it, it’s certainly worth a look. There are some deleted and extended scenes as well as a slew of short featurettes (again, all were found on previous versions of this movie). Finally the original theatrical trailer is shown and the second disc in the set contains a DVD of the film. 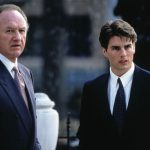 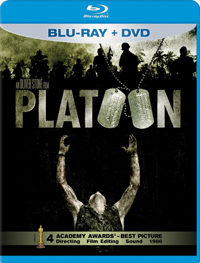