Oh my, my mother-in-law would love this – a world where Catholic Priests rule with an iron fist and you’re forced to say the rosary on command. Yes, this is coming from a converted Catholic (from Methodisism) and I’m still getting used to the ways of the new faith. But Catholics are an easy target because of their ritualistic ways and, well, other things as well. Still, when looking at the box I wouldn’t have guessed that this would be yet another vampire movie. Have you heard? Vampires are in! I don’t mind the occasional movie about our ficticious blood suckers, but every other movie seems to have somewhat of a vampire theme these days. Thank you Stephenie Meyer! Still, there is something about these creatures that is somewhat captivating and admittedly my eyes did light up when I saw that “Priest” was indeed, another vampire movie.

The film is set in a post-apocalyptic society that’s literally ruled by Priests. We get an animated (and graphic) introduction as to the history of humans versus the vampires. The humans were getting slaughtered and were powerless against the vampires, but along came the Priests and eventually all but eliminated the vampires. Now the Priests rule the world with an iron hand and if images of Big Brother pop in your mind, it’s with good reason. We meet the aptly-named Priest (Paul Bettany) who lives in seclusion and now that his services are no longer needed, has somewhat of a desolate life. This changes when his niece (Lucy Pace) is kidnapped by a group of vampires. Going against the grain, Priest heads out with the help of his niece’s boyfriend (Cam Gigandet) and a priestess (Maggie Q) who can fight with the best of them. Will Priest be forever ostracized by the Church for defying their orders or will he prove them wrong by showing that vampires are indeed still alive and active?

“Priest” is pretty much everything you might expect it to be. If you’re a fan of the “Underworld” movies or “Van Helsing”, then this is more of the same. I would say that either of those films is probably a better watch than this one. It’s not that “Priest” is a bad movie, per se, because it’s not. I will say that the movie is predictable and not too terribly original. Let’s face it, there’s only so much you can say or do when it comes to vampires. Although I will say that the vampires in this film are of a different breed than the beautiful, romantic ones we’ve become so accustomed to seeing on the big and small screen (ironically enough Stephen Moyer, star of “True Blood”, has a cameo appearance here). Again, if you’re a fan of the genre then there’s likely nothing I can say that will deter you from seeing this movie, but I do feel that there are other, more entertaining films out there that manage to communicate the same message.

What “Priest” lacks in substance, it more than makes up for in style. Shown in a 2.40:1 AVC HD transfer this is one fine-looking movie. The image is stylized and has several scenes when we see the stark contrast between Bettany’s milky white skin and the black cloak that he wears throughout. There are a few scenes at night that look amazing, I could even read the LED signs in the background that told the masses what to do. Flesh tones are understandably a bit off the charts and even the crucifix tattooed on the faces of the main characters look so lifelike. Detail is amazing. Whatever your opinions on the film itself, it’s hard to deny that it’s one impressive-looking movie.

As amazing as “Priest” looks, it also sounds just as good. Granted with a movie of this genre, we can pretty much expect that this will have all sorts of sound coming from pretty much every channel imaginable. And to no surprise, it does! This DTS HD Master Audio track is nearly as robust as they come and the front and rears are almost constantly humming along. Dialogue is very rich and natural and we get to hear Paul Bettany put on his best “raspy-voice American accent.” If you’re looking for a movie to really challenge your audio setup, this is one to consider.

There are a few versions of “Priest” out there, it does have a 3D Blu-ray version, but this is the standard Blu-ray reviewed here. We get a picture-in-picture feature entitled “Bullets and Crucifixes” which flows along the same lines as the other PIP in that we get some interviews with the director and the cast as well as the standard material you’d expect. We get a dozen minutes of deleted and extended scenes as well as a production featurette on “Creating the World of â€˜Priest'” Finally we get “Tools of the Trade: The Weapons and Vehicles of â€˜Priest'” 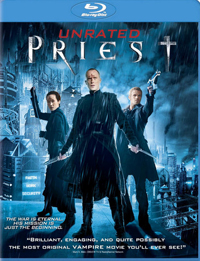