When the decade of the eighties finished, many critics named films that were their favorites. One of the films that was on most of their lists (many at the top of it) was a film that lost Best Picture to Robert Redford’s Ordinary People and told the struggle, rise and fall of a boxer who’s whole world is a fight in itself. In glorious black and white, the story of Jake LaMotta in the wonderful hands of Martin Scorsese, gives a lot of tough and rough times but rises up above it as best he can as the fighting Raging Bull.

A fairly big man is going down his life as he waits in this one room with his cigar in 1964. That man is Jake LaMotta (Robert De Niro) who many years earlier was a middleweight who had his own share of peaks and valleys. He wishes to be champion of the world but knows he can never make it to heavyweight. With his fighting brother Joe (Joe Pesci) as his manager, Jake fights his way both in the ring and outside the ring, much to the dismay of some around him who would expect him to be a more respectable human being and it’s this part of him that gives him the eternal struggle to the title in his weight class and the effects both before and after that title shot.

At first, this viewer always wondered how this movie blazed to the top of many best list when it came to a span of ten years. It was until after sitting down and watching it that I realized how ambitious and great this film is, especially on its second viewing. This is thanks to everything in the film from the directing by Scorsese to the editing to the structure and to the cast and look of the piece.

One of the smartest things this film did was that it didn’t try to be like the popular boxing films like Rocky (which share the same producers with this film). There is no come from behind story and there is no big fight at the end. The filmmakers did the wise thing of starting with Jake as he’s older and coming back to him later to look back at everything in between without going back to the elder LaMotta during that in between time.

It has the advantage of being in black and white and being a great looking film as a result of it and has an effect that wouldn’t have been the same had it been shot in color. It also signified on how most of the world was imagined through these monochrome eyes during this 17 year span (1947-1964). Also, after being through a lot of fights, a viewer can imagine that things aren’t seen the same after many fights with boxers so there can be trouble seeing with color so the look of black and white is a great plus.

Granted, this is not a film for everybody thanks to the rough status of the main character, the gritty material and the brutal look the fights that our characters are involved with both with and without the round bell. La Motta in this film is not always a likable character but the audience is hooked as to where he and the people around him will go to next no matter how lively or dreadful the results may be. It also didn’t hurt that something that’s evident in a lot of Scorsese’s work is here like the occasional crazy close up and one scene that has a long take that both Goodfellas, The Color of Money and Casino benefited from.

From beginning to end, Raging Bull is unlike any film about boxing or a boxer and the difficulties one would have in between what they do best and in the best they can survive despite the most negative of situations.

Black and white movies aren’t exactly a dime a dozen, so when one comes around â€“ it’s somewhat of an event to watch. â€œRaging Bullâ€ is shown in its original black and white 1.85:1 AVC HD transfer that looks suspiciously like the transfer used for the original Blu-ray release. And why not? Contrast is very strong and black levels are right on the mark. Detail has been bumped up a notch or two from the standard DVD release and it’s very difficult for me (and I think, anyone) to picture this film in anything but black and white. The more narrow aspect ratio was the right choice here, it fills the screens of our HDTV’s and gets us more connected with the story and the actors. This is a pristine example of how a film should look on Blu-ray.

The DTS HD Master Audio soundtrack isn’t the most robust out there, there are better. But the jazzy score and all encompassing mix are part of what make the film memorable. A myriad of Scorcese’s films are marked by their soundtracks and though this one isn’t quite as notable as â€œGoodFellasâ€ or â€œThe Departedâ€, this one does have its moments. The majority of the film is dialogue driven and yes we do get a lot of four letter words from stars DeNiro and Pesci. There’s a bit of a hiss in a few of the scenes, but by and large this is a great-sounding track with one of the more interesting scores that I’ve heard in a while.

There are plenty of versions of this movie out there and this is the most recent, this 30th Anniversary Edition brings in some never before seen features as well as porting over some that appeared on a previous disc. Let’s start with what’s new, shall we? â€œMarty & Bobbyâ€ is just as the name entails, it’s director Martin Scorsese and star Robert DeNiro as they reflect on their past collaborations in films (too many to list). â€œRaging Bull: Reflections on a Classicâ€ shows us the lasting impact of the movie even 30 years later and its continued accolades. â€œRemembering Jakeâ€ has some memories and thoughts by some real life professional fighters as they share their insights on Jake LaMotta. â€œMarty on Filmâ€ is essentially just that â€“ director Martin Scorsese reflecting back on his movies and their impact on society. Rounding out the new features is an appearance by star Cathy Moriarty on â€œThe Tonight Show with Johnny Carsonâ€ on Marcy 27, 1981. Moving on we come to the features that were already on a previous disc and we begin with the very well-made â€œFight Night.â€ This 80 minute featurette is in several parts and encompasses the film’s different segments. â€œThe Bronx Bullâ€ is a segment on the real Jake LaMotta and we have â€œDeNiro vs. LaMottaâ€ contrasting fact vs. fiction. There’s a vintage newsreel as well as a trio of commentary tracks, the best of which features Scorcese and his longtime editor, Thelma Schoonmaker. I do have to note that these are on the DVD version of the movie and not the Blu-ray. This makes no sense to me, but that’s the way it goes. 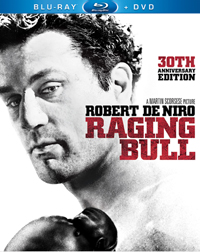