Charlie Babbitt (Tom Cruise) is a ruthless businessman, a man who never thinks of anyone else but himself, unless he has a lot to gain by doing so. The world revolves his wants and needs, or at least that is how he treats his existence. He wants to succeed, to have a massive house, the coolest automobiles, and a substantial bank account. Charlie has hustled people his entire life, doing so without a second thought or second of remorse. As a young man, he was thrown out by his father, a moment that has remained within Charlie ever since. Now, his father has passed on and left his son a surprise inheritance. Charlie always knew his father would remember him, but he wasn’t sure how much money, property, or other goods would be his. As it turns out, he was left with an antique vehicle and no other material possessions. No cash, no land, just a slick car and another surprise that rocks Charlie’s world. The rest of his father’s worldly goods were left to a man named Raymond (Dustin Hoffman), a man Charlie didn’t know existed. But Raymond is Charlie’s brother, which means if he wants the cash, Charlie must take his brother into his life. This won’t be easy, as Raymond is autistic and has some unusual patterns to his life. Can Charlie put his own life on hold, while he discovers a new life with his newfound brother?

A lot of dramas are reliant on emotional manipulation, that is to say that the emotional impact is due to a sucker punch. But the elite level pictures don’t need to resort to such tactics, as the story, characters, and atmosphere set the emotional stage. One such film is Rain Man, the acclaimed motion picture directed by Barry Levinson (Disclosure, Liberty Heights). Rain Man took home four Oscars in 1988, including Best Actor for Dustin Hoffman, Best Director for Barry Levinson, and the crown jewel of all awards, Best Picture. I admit that this movie pulls the heartstrings, but I think the emotion that the movie builds is genuine. Barry Morrow and Ronald Bass were awarded with an Oscar for Best Original Screenplay for good reason, as the story is well told and allowed to develop at a natural pace. This ensures the emotion isn’t forced or rushed, but instead allows the audience to become invested in the characters. Hoffman and costar Tom Cruise deserve immense credit also, as their performances are excellent in all respects. Cruise proved he was more than a sex symbol, while Hoffman continued to establish his place as one of the best actors of his time. This is just a well made, effective picture that remains on your mind long after the end credits. I am thrilled to see MGM release a new Special Edition, as this is a movie that deserves such treatment. So if you’re a film buff of any kind, Rain Man is highly recommended.

His co-star might have won a lion’s share of the attention, but no one could overlook the intense, memorable performance of Tom Cruise. At the time, Cruise had been a major star for a while, but hadn’t proven his dramatic skills. His work had been in comedies or action flicks, movies that didn’t require much beyond his looks and screen presence. But with Rain Man, Cruise established that he was a talent beyond his physical traits, as his skills as a dramatic actor were proven beyond a shadow of a doubt. He is simply incredible as Charlie here, a role which should have earned him an Oscar and immense praise, but didn’t. Sure, Cruise was given more respect thanks to his effort here, but he was still better known for his lighter, less demanding material. His costar’s performance might have overshadowed his own, but the chemistry was obvious and both men made the most of their gifted coworkers. These days, Cruise is back to action movies for his paychecks, but a return to real drama would be most welcome. Other films with Cruise include Mission: Impossible, The Firm, The Color of Money, Top Gun, and The Last Samurai. The cast also includes Dustin Hoffman (Straw Dogs, The Graduate), Valeria Golino (Immortal Beloved, The Indian Runner), and of course, Michael D. Roberts (The Ice Pirates, Most Wanted).

This is the first foray on Blu-ray for “Rain Man” and while it looks improved from the previous standard DVD release, there’s still a little left to the imagination. The main thing I noticed is the amount of grain in some scenes. It’s mainly in the background, but is noticeable. Conversely, flesh tones seem very warm and well-balanced. The stark whiteness of Cruise’s complexion mixed with the reddish hues of Hoffman’s are an indication of how vivid this image really is. So while not the shining example of a next generation format we’d hoped it’d be, it’s an improvement from what it has been.

As far as the audio is concerned, the new DTS HD Master Audio mix is certainly acceptable, but let’s face it – “Rain Man” is and has never been the shining example of high quality sound. Now does it sound bad? Of course not, not in the least. The opening song, “Iko, Iko” does sound pretty decent but the dialogue-driven film just doesn’t light up your speakers like other titles. Then again, as previously mentioned, it’s not really supposed to.

The same series of featurettes is included from the special edition Blu-ray including the trio of audio commentaries. And if you’re a fan of solo audio commentary tracks, then this release is going to thrill you beyond all belief. The first track is with director Barry Levinson, who provides an in depth, candid take on how the movie was produced. He discusses his cast at length, especially the two leads, then moves between numerous other subjects. You can also listen to sessions with screenwriters Ronald Bass and Barry Morrow, who detail the creation process. Morrow talks about the genesis of the material, while Bass deals with how it was brought to the screen. Two featurettes are also included: â€œThe Journey of Rain Manâ€ and â€œLifting the Fog: A Look at the Mysteries of Autism.â€ There’s also a deleted scene, some production photos, and the film’s theatrical trailer. 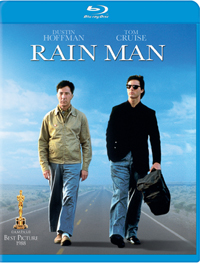