When I first saw the ads for “Rise of the Planet of the Apes” I had to think if it was the “new” series or if somehow Fox was making yet another installment in the original series. This wasn’t the smartest assessment as the original “…Apes” films are nearly forty years old now. Then again, it’s been a decade since the re-make of the original starring Mark Wahlberg so I think some minor confusion was to be expected (or at least that’s what I keep telling myself). Whatever the case, I guess it’s fairly evident that I’m not the biggest fan of this franchise. Until now. I’ve never been a fan of talking animals in movies even when it’s expected like in “Babe” or the more recent “Zookeeper.” It just freaks me out. At any rate, I am a big fan of James Franco and despite his performance at last year’s Oscar ceremony, I’ll still continue to see the films that he stars in. So we’ve got a well-established franchise, the current “It” actor in Hollywood and super-intelligent primates. This is “Rise of the Planet of the Apes.”

Dr. Will Rodman (James Franco) is in the midst of searching for a cure for Alzheimer’s disease. This hits close to home as his father (John Lithgow) is a shell of the man he used to be. Rodman is doing experiments on chimps and is getting some positive results. But after a few have some adverse reactions, the project is cancelled and Rodman finds himself nursing a baby chimp at home. The chimp’s name is Caesar and is exhibits signs of extreme intelligence and as the years pass, his intelligence grows. After an incident Caesar is brought to a primate reserve (and evidently those places do exist) where he’ll live with other apes, monkeys and gorillas. He starts to resent Will and becomes more accepting of those around him. Caesar quickly adapts to his new surroundings becoming a leader of sorts. You see, there’s a battle on the horizon and the apes long to break free of their “prison.” Will San Francisco be taken over by our primate friends or will Dr. Rodman and company find a way to put the smack down on them?

Ok, I wasn’t sure what to expect when seeing this movie but I’d heard that it was actually quite good. And after viewing it I’d have to say that I concur. The film benefits from a very strong script and James Franco essentially carries the film from a “human” perspective. “Rise of the Planet of the Apes” somewhat thwarts convention in the sense that movies with anthropomorphic characters might be misconstrued as, well, “cheesy.” Thankfully this isn’t the case. There’s enough plot development to keep the action and suspense moving and the ensemble cast does a fine job as well (including John Lithgow, Tom Felton and Brian Cox). Given the critical acclaim that this movie got I don’t think we’ll need to wait another decade for the next installment and after watching the ending credits, I’m sure that this cliffhanger ending was put in place for a reason. Highly recommended.

The 2.40:1 AVC HD transfer for “Rise of the Planet of the Apes” looks pretty impressive and is what we’d expect from a major studio, big budget film. Colors are strong throughout and the thing that really impressed me was the detail. Blu-ray obviously has an increased level of resolution and nowhere is it more noticeable than here. The CGI on the apes is barely noticeable, we can see the individual hairs on Caesar. Black levels are very strong as is contrast. There’s not a whole lot else to say here as this transfer does deliver and I highly doubt anyone will find any faults with this near flawless transfer.

The DTS HD Master Audio soundtrack is also very robust and hard to find fault with. Vocals are strong and well-focused and there’s just enough action to engage all of the surround channels. There are a few explosions, several fight scenes and even a climatic finale on the Golden Gate Bridge of all places. We also get a very imposing score that amps up the tension level as the apes start to think for themselves. Like the video, there’s nothing I can really find fault with when it comes to how this film sounds. On a technical level “Rise of the Planet of the Apes” delivers.

As one of Fox’s marquee titles, “Rise of the Planet of the Apes” comes equipped with plenty of supplements, so let’s dive right in and see what to expect. Starting off we find a duo of audio commentaries, the first with director Rupert Wyatt and the next with Rick Jaffa and Amanda silver (the screenwriters). Both commentaries have their pros and cons, the cons in the first one being that there’s some unusually long periods of silence. The more engaging track is with the screenwriters as they tell us their influences and the overall story and character motivation. The remainder of the supplements are largely featurettes with many focusing on the more technical aspects of the film. We do get a segment focusing on “The Genius of Andy Serkis” as many remember played Gollum in the “Lord of the Rings” films. We get some scene breakdowns, some technical features on the CGI and some concept art galleries. We also get 11 deleted scenes as well as some BD Live functionality proprietary to Fox. There’s also a digital copy of the film for your portable device. 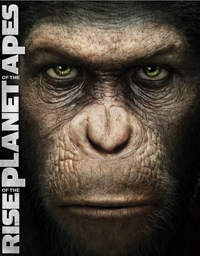