Jump to a section
Plot: What’s it about?Audio: How’s it sound?Supplements: What are the extras?The Bottom Line

I strongly believe that Denzel Washington is one of the greatest actors working today. I doubt many would disagree, but I really can’t recall a bad performance of his. Sure, not all his films are always worthy of his efforts, but he always brings a unique spin to his roles. This film in particular feels to exist and work primarily to Denzel’s abilities. Washington gives such a strong performance in this film that you really can’t imagine another actor in the role. I think it can work in reverse as well in that I can’t picture the film without Denzel. Indeed, they seem to go hand in hand here. Right from the start, something just clicks here. It just works. Denzel was nominated for a golden globe for his performance in this film, but some of the early buzz wasn’t great for this one. Apparently Washington and Director Dan Gilroy edited and restructured the film and took out some 12 minutes of footage to which the test screening audience responded more positively. An early review compared his character here to Larry David of TV’s Curb Your Enthusiasm, which is not only a personal favorite show of mine, but also an accurate comparison. Denzel plays the title character and there’s just something so unique about him that we can’t stop watching. While the film isn’t perfect, in some ways it only helps it, because the lead character is so far from perfect. It feels somewhat appropriate in a strange way. Let’s take a look, shall we?

The title character is a lawyer in present day, but his whole mindset and attire seem to be stuck in an earlier era. He wears out of date suits, has humungous headphones he wears, has a flip phone and uses note cards to jot down information rather than a computer. The film never dives into what exactly Roman’s deal is, but that’s ok. Gilroy’s previous film, Nightcrawler never gave a backstory to the Jake Gyllenhaal character either. Things are just fine for Roman until his partner, the firm’s head honcho, if you will, has a heart attack. This leaves Roman out of options as the firm isn’t profitable, so he must look for a new job. Enter George Pierce (Colin Farrell) as a partner that his former boss put in charge of the firm. Pierce eventually hires Roman at his own firm, but not without some caveats. For one, he asks Roman not to speak out of line to some of the partners at the firm. Also, he wants Roman to upgrade his wardrobe a little bit. The film introduces a few other characters that all play into the grand scheme of things. Roman is put on a case which involves a clerk getting killed. I won’t reveal all the specifics, but for a character as noble and full of integrity as Roman is, he makes a bold decision that’ll lead to serious consequences.

If the film feels a little too scattershot and lacking a strong focus, I think that’s OK. It’s very much in check with the title character in that he has flaws himself. Washington really understands the character and adds an authenticity to it. We might not always agree with the things he says and does, but we want to follow him on the journey anyway. Things get a bit tense at times, there’s humor and intrigue as well. It’s the kind of film that just sort of hooks you. It’s far from flawless from a critical standpoint, but watching it you almost don’t care and forgive its shortcomings if only because of this character. It came and left theaters without much notice, but hopefully it’ll pick up a larger audience at home.

Video: How’s it look?
Sony continues to impress with a solid transfer that makes use of the Los Angeles landscape with sunny background shots, nice shots of the city as well as strong definition on textures and other such things. There’s a clean look to the whole film that really leaves little to be desired. The image is AVC encoded with a 1.85:1 ratio. Fans will be delighted with the results here.

The DTS HD track is also solid. Again, with L.A. as the setting, we get involved as city noise can be heard in the background, vocals have a freshness to them and the channels all stay active as they should. At not times is this a robust track, but the film doesn’t always need that. It presents things nicely as it should. Like the transfer, this track largely satisfies.

I can’t speak enough about Washington’s performance here. He is an actor who gets so into his characters that we can’t picture anyone else in the role. See it for the character before anything else. The plot is interesting, but just seeing this character and his daily routine are part of the entertainment value here. Whether you rent it, stream it or buy it, it comes recommended. Sony’s Blu-Ray provides strong visuals and some solid, if not great supplements. Check it out. 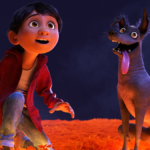 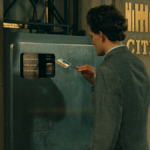