There is a brutal murderer on the loose in the Southwest, leaving behind blood soaked scenes of mangled corpses with exploded heads. As this trail of lethal mayhem unfolds, a group of people assembled by a scientist watch in horror. These viewers were able to see the genesis of the rampage, as seen through binoculars. But they soon become more than spectators, as horrible deaths began to befall them. Even so, some continue to watch as the killer rolls on, as well as a local police officer tries to stop the carnage. The cop isn’t alone however, as a tourist is at his side to lend her assistance. As death after death unfolds, it seems as if the killer will never be stopped. The policeman is determined however, so even with his own life in serious danger, he pushes on and tracks down the murderer. Oh yeah, the killer is a tire.

A maniacal tire with telepathic powers? Yes please. As strange as the premise might sound, writer/director Quentin Dupieux is able to craft it into an effective picture. This is not a horror movie per se, though there is a lot of death and by turn, quite a bit of blood splashes around. I found Rubber to be more of a black comedy however, with a surreal sense of humor and the freedom of not coloring within the lines. As random as some elements can seem, the movie still works and has moments of near brilliance, which is impressive. At its core, Rubber is taking aim at the movie business as a whole, but the film also has other context beyond that rather large, obvious target. In other words, yes the movie centers on a sentient tire with murderous rage, but there is much more going on than just that. I had a blast with this movie, it was nice to watch a movie with some fresh ideas for a chance. Rubber is well made fun, so fans of unusual cinema shouldn’t miss this release.

Rubber is presented in 1.78:1 widescreen. This transfer looks terrific. The image is crystal clear, with impressive detail and depth throughout. You’ll see more tread than you ever dreamed possible. The visuals also show off warm, natural colors, smooth contrast, and consistent black levels. Let’s be honest, few things look as cool in high definition as a serial killer tire.

This DTS HD 5.1 soundtrack doesn’t explode off the screen, but it has good presence that enforces the film’s mood. The tension is more palpable thanks to subtle surround use, while the music also makes good use of all the channels. The focus is on dialogue and other front channel elements however. That works well though, as what we need to hear comes through fine and when some extra atmosphere is needed, that arrives as well. This disc also includes English and Spanish subtitles.

A series of interviews with the director and several cast members is included, as well as camera tests and the film’s theatrical trailer. 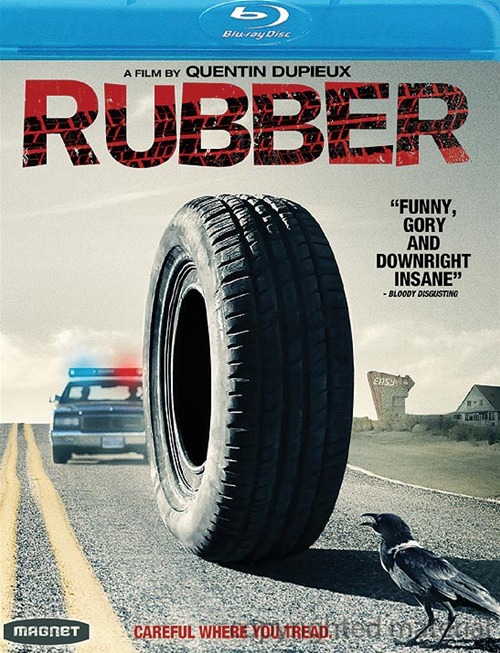