The Spectacular Now was one of the better films I saw from 2013, but I’d be willing to bet that many people hadn’t even heard of it. That’s a shame, as it provides a very rewarding experience. Miles Teller stars as Sutter Keely. The film begins with a voice-over where Sutter explains his current situation and gets us up to speed on his current predicament. A slight misunderstanding puts Sutter back in the singles club. Sutter doesn’t do very well in school, but he’s earns an A for his social skills. He’s very much the life of the party in a lot of ways, he lives in the moment and doesn’t have any plans. If Sutter hopes to ever achieve any goals in life that he might have, he needs to seriously cut back on his drinking. He constantly has a drink in his hand. That or he hides his flask in his jacket pocket. We often see him carrying a paper cup that’s strongly diluted with alcohol. Sutter seems to enjoy his job at a local men’s clothing store selling suits and ties. We see that he has a strong relationship with the owner of the store and treats the customers well, often making a few asides after they purchase items. One morning we see him passed out in a lawn. This is where he meets Aimee (Shailene Woodley) when she discovers him in her yard. The two know of each other, but have never officially met. Aimee is going on a paper route and Sutter agrees to help her as it would help him as well since he can’t remember where he parked his car. The two of them slowly get to know each other. Aimee is responsible and is actually helping her mom with her paper route since her mother stayed out too late the night before. Aimee has plans,but tells Sutter that they likely won’t be fulfilled as she needs to stay and cater to her mother’s needs. He tells her she needs to stand up to her mother and live her own life. Eventually the two of them cut a deal. Sutter agrees to confront his mother about something if Aimee does the same. At first Sutter looks at Aimee as just a friend, but he slowly starts to liker her as more than that. She even helps tutor him in Geometry and Sutter eventually asks her to the prom. Sutter tells his friend Ricky (Masam Holden) that he finds Aimee beautiful because he’s finally gotten to know her and has looked inside her. Aimee begins to really like Sutter as well and the two of them have a nice, easy chemistry.

If this film is any indication, Teller and Woodley both have a long career ahead of them. At times, Teller reminded me of a young John Cusack with a touch of Vince Vaughn. He often talks fast and displays a confidence to him that many probably dream of. He’s an easy guy to like. Shailene Woodley also fares well. She’s very much the girl next door, but has a raw, understated beauty to her. She doesn’t have the immediate striking impact that a lot of girls have, but she grows on you slowly but surely. Sutter lied to Aimee initially about his father. He tells her at first that his dad is a pilot, but in truth, he dad has been absent most of his life. He finally persuades his sister to give him his dads location. Kyle Chandler plays Sutter’s father. Aimee agrees to go with Sutter to meet his father. I won’t reveal what happens next, but the scenes between Sutter and his father are quite effective. It’s also not as predictable as it could’ve been, thankfully. Watching some of the features on this Blu-ray disc, it’s stated that they wanted to create a very authentic feel to it. This certainly works in the film’s favor. A lot of the cast is without makeup during the movie and this helps add to the realistic feel. What’s also interesting is that I didn’t spot a single cell phone used by any of the characters. I’m guessing this is to help establish a more timeless feel. Some of the vehicles are more modern, but we’re never told what year the films takes place. This film has many positives and is well worth seeing. Many of us have been in Sutter’s shoes before. Being a high school senior can be a bit frightening at times and this film represents that anxiety well. I was reminded of another recent teen film, The Perks of being a wallflower. I prefer this film, but both offer accurate depictions of high school life. It’s sad to see so many high school film miss the mark. There’s a John Hughes feel to the film and many will appreciate its scaled back approach. The characters are very real and have real conversations. You won’t find any lowbrow humor here. The writing is in fine form, acting above average and story intriguing. There is one moment that I think could’ve been handled better. Without revealing specifics, lets just say that a scene where a character is hit by a car feels off to me. I understand the point of it, but I think it could’ve been executed better. Still, that’s a minor complaint in an otherwise great film that resonates long after it’s over.

Note: The back of the case mistakenly reveals a plot point that happens late in the picture. I’d advise anyone reading this review to not read the description if you haven’t seen the film before. I don’t know why they would reveal that, but I wanted to mention it here nonetheless.

The transfer is pretty much flawless. I mentioned the characters not all wearing makeup and their facial features are given strong detail here. Miles Tenner has a few scars on his face and one near his shoulder and those are shown with strong detail here. There are a number of wide shots that are truly heightened here in the HD format. It’s mentioned in one of the features on this disc that shooting in wide-screen added to the film and indeed, it does here. There’s a party sequence near the woods early in the film and that displays a wide range of solid colors. Background shots are nicely detailed and free of flaws. The transfer is AVC encoded and with a 2.35:1 ratio.

While not as strong as the video transfer, the DTS track does satisfy. I’ve mentioned before with dialogue-driven films that the rear channels won’t be as active. The film begins with a party sequence and this is about as active as the rear channels will get. The bass is also kicked up with some loud music at the party. Otherwise, the front channels remain the most active, but that’s OK. Vocals are sharp and audible with no flaws to speak of. There is some background noise in a few scenes that display a nice, smooth balance.

This single disc release includes a number of short, but informative featurettes and a nice commentary track and some deleted scenes. There’s also a digital copy code inside the case. 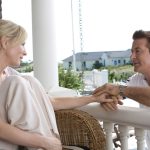