A little girl named Regan McNeil (Linda Blair) has been having some tough times of late, it seems her mental and physical health have been sliding in the recent past. But we’re not talking about a simple sore throat here, more like superhuman strength and intense projectile vomiting, which aren’t symptoms of the common cold, at least any strain we know of. After her mother tries all the medical options she can to cure the problems, she decides to go see a psychologist, who is also a man of the cloth, or a priest. This man is certain Regan has been possessed by an evil and demonic spirit, so unless she is freed soon, she could be killed in the process. So Regan’s final hope lies within two men of religion, one world weary, but experienced priest and another who has begun to doubt his faith. As a team, these two men must work together to free this young girl from the demon within her, which will not be an easy task, to say the least. Pea soup, anyone?

If you’re a fan of The Exorcist, then chances are you’ve heard about the debates between author William Peter Blatty and director William Friedkin, who had different ideas when it came to the film’s final cut. Friedkin was pleased with the version that ran in theaters years ago, while Blatty wanted Friedkin’s original rough cut to be issued edition of The Exorcist. After some time of back and forth, Friedkin agreed to recut the film to resemble that original rough version and though it isn’t exact, this new version is a close match for that edition. This new cut runs about ten minutes longer and has a lot of added dialogue, which slows the pace somewhat, though you have to love that Spider Walk sequence, am I right? Even though I like a couple of the new sequences found in this version, I still prefer the original cut, as it seems spookier and that’s kind of the point here. It seems as though this new edition tries to explain too much, which pulls out some of the scariness and that isn’t good in a horror flick. I like this new version and I am pleased to have seen it, but I think fans will want to hold on to both editions in the end. Even if you like this extended cut better, keep that 25th Anniversary disc, as it has a ton of great supplements not found here. As many of you will be also, I’ll be adding both of these discs to my collection, so I recommend this new cut to fans of the film with no hesitations.

Since this edition was driven into existence by William Peter Blatty (also wrote The Exorcist III and a few films in the 1960s), I figured I would give him a few lines of ink here. As I am sure you know, Blatty penned the novel on which the film was based and he also wrote the film’s screenplay, which worked out well. In other words, you don’t have to worry about the novel being tossed aside in the process, since the same dude took the reins on both projects. His work in both formats is fantastic and really sets the stage for the film, which also delivers on the potential of Blatty’s writings. I’m sure there was some concern about whether or not the film could match the novel’s visual and atmospherical potential, but I think director William Friedkin (The French Connection, Rules of Engagement) and his crew come through with flying colors. The cast here is also top notch, with such performers as Max Von Sydow (The Seventh Seal, Needful Things), Jason Miller (Rudy, Toy Soldiers), Ellen Burstyn (The Last Picture Show, The Yards), Lee J. Cobb (Mackenna’s Gold, In Like Flint), and of course, Linda Blair (Chained Heat, Ruckus).

This is, I think, the fourth version of “The Exorcist” on a disc format but its first on Blu-ray. I’m pleased to say that Warner has done a fine job with both of the editions as they look sharp, clean and as well-defined as I’ve ever seen them. Granted the film is nearly 40 years old and there’s still a bit of lagging grain in some of the scenes. The entire color palette is still somewhat reserved and though black levels look fairly good, there were a couple scenes in which I saw the tiniest bit of artifacting and “noise” in the shadows. Contrast is right on the mark and let me tell you, if you’ve never seen Linda Blair’s vomit in HD well you’re missing out on the best that life has to offer. Overall it’s a noticeable upgrade, but nothing that’s night and day difference.

Here’s a screenshot that compares the three different versions of the film, take a look.

“The Exorcist” has once again benefitted from dynamic audio. The previous version had a fairly robust Dolby Digital EX mix that sounded a lot better than I’d expected. This new Blu-ray version contains a DTS HD Master Audio mix that really brings out the best in what the film has to offer. Unlike many films of the age, the mix on “The Exorcist” doesn’t really sound engineered or fake. I was pretty impressed at how robust this really did sound and even as many times as I’ve seen the film, found myself craning my neck to hear some of the little nuances that kept emanating out of my surround speakers. Dialogue is key to this film, well any film I suppose, and the vocals are very strong and clear here. Max Von Sydow’s powerful voice is ever so present and again I find it hard to believe that this film is nearly 40 years old. This new mix is by far the best the movie has to offer, embrace it.

“The Exorcist” was one of Warner’s inaugural titles on DVD back in 1997 and since then, it’s had a few different incarnations on the format. This new Blu-ray pretty much conglomerates all of those previous editions into one making it the definitive version (so far). This two disc set contains many of the same supplements that were used on the previous editions, but we do get a new three part documentary on the film. “Raising Hell: Filming the Exorcist”, “The Exorcist: Locations” and “Faces of Evil: The Different versions of ?The Exorcist'”. The first disc also contains the extended director’s cut o the film while the second disc contains the original theatrical version of the movie. Also housed on the second disc are the same commentaries by director William Friedkin and the second with producer/writer William Peter Blatty. We get the same introduction to the movie by director Friedken as well as a trio of interviews. The 1998 documentary “The Fear of God: The Making of ?The Exorcist'” is also present as it was on the previous DVD. If you don’t own this on DVD, then having both editions is certainly appealing though I’m not sure if the addition of one new documentary is enough to warrant a purchase. “The Exorcist” is one of Warner’s best-selling catalog titles so odds are we’ll see yet another version in the future. 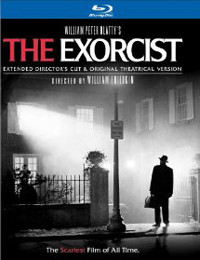