Arrow Video continues their domination over the Giallo genre on Blu-ray with their release of the classic Giallo The Fifth Cord. Over the years, I have enjoyed watching the Giallo films that Arrow has released. I have been exposed to films by Dario Argento, Sergio Martino, Umberto Lenzi, Lucio Fulci, and more. Their release of Luigi Bazzoni’s The Fifth Cord ranks as one of their best films on the label to date. I am ashamed to say that this film had flown under the radar for me and not been mentioned to me before Arrow decided to release the film on Blu-ray. This is a classic film that I can not recommend highly enough.

The film begins at a nightclub. The cast of characters for the film are introduced. One of the patrons is brutally attacked on his way home while walking through a tunnel. Franco Nero plays Andrea Bild, an investigative journalist that has a drinking problem. Andrea is also juggling numerous women at the same time including his beautiful ex, Helene (Silvia Monti.) The attacker strikes again, this time fatally, leaving behind a black glove that is purposefully missing one finger. This brings Andrea under suspicion because he knows all the parties involved and has no proper alibi. Andrea must investigate the crimes and find the killer to clear his own name. Meanwhile, the body count rises as the fingers on the gloves are removed one by one.

The film works well for numerous reasons. First and foremost – the cinematography by Vittorio Storaro (who would later work on the films Last Tango in Paris, The Last Emperor, and Apocalypse Now) is absolutely stunning. Storaro had already rocked the Italian cinema world with his cinematography on the classic Argento thriller The Bird With The Crystal Plumage. Many people have remarked that this is one of the most visually appealing and beautiful of all the Giallo films. This is no exaggeration. This film is a master class in lighting and creative camera angles. When watching the film, I felt a desire for the film to continue just so I could see a few more shots from Storaro under the direction of Luigi Bazzoni. Luigi Bazzoni does a fantastic job of directing the film. It is interesting that he only really completed five narrative features in his career. A director with his skill set should have done many more films, but things don’t always pan out. Fortunately, we have The Fifth Cord to admire. Going back to the cinematography of the film, the visuals are incredibly strong. The sense of architecture that Storaro brings to the film reminded me of some of Antonioni’s finest moments. He makes the buildings in the film look like art pieces. When you see the spiral staircase in a parking garage or the exterior of the newsroom office building, you will see just how phenomenal Storaro could be at making structures speak.

The screenplay for the film is strong, especially for a Giallo. The film relies more heavily on suspense than on gore or over the top violence. The violence in the film is never gruesome. The final act of the film is one of the most exciting third acts I have seen in recent memory. While the film has some nudity and sexuality, it does not feel particularly exploitative. Everything that occurs in the film is within the context of serving the story.

It still follows certain rules from Giallo films, employing such devices as the black-gloved murderer, the point-of-view shots from the killer’s perspective, and the complicated plot full of red herrings. The difference is that the film is done with such attention to detail and class that it rises above the foundations of the genre. The film never feels as if it is trying to appeal to a simplistic audience. It never panders and hopes that the plot will reveal itself to those who play close attention. It is one of the better screenplays of the genre.

The acting in the film is also top notch. Franco Nero was at the peak of his powers in this film. He had already become a star and box office draw in films like Django and A Quiet Place in the Country, when he starred in this film. The film relies on his ability to convey an animalistic savagery at times in the role. It is a great performance that also requires some vulnerability from the actor. Playing the drunken hero in despair, Nero is always believable. His eyes and face convey a character that has become a slave to the bottle. The other actors turn in reliably good performances but they are mainly window dressing to play off of Nero’s performance. That said, when the window dressing includes , it is pretty hard to beat.

The score by Ennio Morricone is excellent. It fits the film like a black glove and adds to the overall allure of the proceedings. Between the strong visuals and the score, the film becomes mesmerizing.

The Fifth Cord is one of the best Giallo films ever made. I can not recommend this film highly enough. If you have any interest in the genre, this is a must-see.

Arrow Video have provided a great looking 1080p transfer of the film using an MPEG-4 AVC codec of a brand new 2K restoration from the original camera negatives. Here is what the booklet details:

The Fifth Cord / Giornata nera per l’ariete is presented in its original aspect ratio of 1.85:1 with Italian and English mono audio. Scanning and restoration work was performed by L’Immagine Ritrovata, Bologna. The original 35mm camera negative was scanned in 2K resolution on a pin-registered Arriscan. Thousands of instances of dirt, debris, scratches, picture instability and other instances of film wear were repaired or removed through a combination of digital restorations tools and techniques.“…“The film was graded on Digital Vision’s Nucoda Film Master at R3Store Studios, London.

This film was given a Blu-ray release a few years ago by Blue Underground. Unfortunately, I did not own that release so I can not give an accurate comparison. This new Arrow transfer looks absolutely phenomenal. Anybody who has seen this film knows that it is a feast for the eyes. The legendary Vittorio Storaro lent his talents to the film and it is a mesmerizing display of showmanship. Storaro had lent his talents the year before to the incredible The Bird With Crystal Plumage and one year after this film lent his talents to Last Tango in Paris. This film is just as visually exciting in every way as those films. Storaro understands how to film architecture and make it tell a story. The new 2K transfer allows the fine details of the film to shine through. For me, this is one of my favorite transfers this year. Visual storytelling at its finest.

The mono Italian and English language tracks were remastered from the optical sound negatives. The audio synch will appear slightly loose against the picture, due to the fact that the dialogue was recorded entirely in post-production, as per the productions standards of the period.

I listened to the original Italian track and thought that it sounded pretty darn good. The score by Ennio Morricone is perfectly attuned to the film. Morricone is probably my favorite of all composers and I love watching all these Italian films that he put his talents towards. The film is well-leveled without any soft-loud dynamics. Arrow always does a great job on their audio mastering and this lives up to teh high standards they have set before.

The Fifth Cord is one of the greatest Italian thrillers ever made. It is a great example of how a Giallo film can be made properly. It never condescends to the audience. It is a bold and beautifully made film with some incredible cinematography. Franco Nero delivers a tour-de-force performance in his role. This is one of those rare times where everything comes together. I would argue that this is essentially a perfect film. Arrow Video have proved an excellent 1080p transfer from a new 2K restoration. The results are remarkable. The special features are also first-class with an excellent extended interview with Franco Nero. I give this film and this release my absolute highest recommendation. This one deserves a place on your shelf. 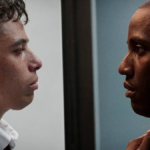 Monsters and Men (Blu-ray)
Next Article 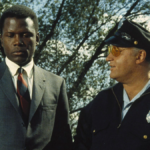