In the late spring of 2011, “Thor” kicked off what was going to be a great summer for movies. Oh, didn’t you know? The event movies no longer happen in June, July and August. May is the new August. All kidding aside, everyone knew that a movie like “Thor” would start things off with a bang and that it did. “Thor” is yet another in the seemingly endless comic book adaptations, but a necessary one with “The Avengers” coming out next year (more on that later). With the tens of thousands of comic book heroes and villains out there, Hollywood is bound and determined to give each and every one of them their own movie. However if you’re not well-versed in Norse mythology, allow me to enlighten you. Thor, you see, is the God of Thunder with his brother Loki being the God of Mischief. This leaves Odin as their father and the rest of the cast of characters are rather inconsequential. So how does Thor have ties to Earth? Well, let’s investigate the plot and that will shed a little light on the matter.

Thor (Chris Hemsworth) is set to become the new King of Asgard, taking the place of his father, Odin (Anthony Hopkins). His brother Loki (Tom Hiddleston) isn’t too happy about this, but what to do? However events intervene and the ceremony never takes place. Thor’s arrogance angers Odin and Thor is sent to Earth to pay for his recklessness. This is where we meet Jane (Natalie Portman), a scientist who happens to be in the wrong place at the wrong time (or the right place at the right time, depending on your point of view). She, along with her boss Erik (Stellan SkarsgÃ¥rd) are trying to figure out who or what Thor is and his mythical hammer has fallen to Earth, now the subject of the government’s investigation. To make matters worse, Loki has now taken over Asgard with Odin falling ill. Thor must learn humility and fight off the forces of evil that threaten not only him but the entire planet as well. The question is…can he do it?

Having been a comic book reader some time ago, I can say that “Thor” wasn’t really one of my favorites. That said I was familiar with his story and the movie was pretty interesting. As mentioned, it does connect the necessary dots for next summer’s “The Avengers” which couples Thor with fellow icons Iron Man, Hulk and Captain America (each the recipient of their own successful film, no less). There’s also a “blink-and-you’ll-miss-him” appearance by another member of the team with Hawkeye (Jeremy Renner), though that aspect of the movie is wisely left untouched. “Thor” pretty much delivers everything a summer film is expected to, it’s loud, has battle scenes and for the ladies out there, the God of Thunder looks like he’s sculpted out of stone.

When it comes to super hero movies and how they look, they rarely disappoint. Thankfully “Thor” doesn’t break that mold and the 2.40:1 AVC HD image looks as if the gods themselves created this for our viewing pleasure. I found contrast to be excellent, detail level is amazing (save for the fake lightning) and colors to be amazing. There’s somewhat of a “Rainbow Road” in Asgard that’s the gateway to Earth and other dimensions. It’s organic-looking and looks amazing on the screen. Flesh tones look as expected and I noticed no evidence of any dirt on the print in the least. This version also includes the 3D version of the movie that that aspect is covered below.

YES! Now this is what I’m talkin’ about! This is what it’s all about! When watching “Thor” I turned up the volume. In one scene the audio was actually so loud that the vibrations knocked the cover off the speaker. How awesome is that!? Granted, this movie had dynamic audio written all over it and this lossless DTS HD 7.1 soundtrack is everything you’d expect it to be. Dialogue is strong and well-centered, surrounds are almost always doing something and the LFE are about as active in this movie as I’ve ever heard them. Suffice it to say that if you’re looking for something that really rocks – look no further.

There are a few versions of this movie out there and this Blu-ray 3D version contains three discs: the 3D Blu-ray version, the Blu-ray version and a digital copy for your portable device(s). We start off with an audio commentary by director Kenneth Branagh. He actually gives a very good, highly informative track here that encompasses pretty much all elements of the shoot, the technical features of the film and much more. If you want to know as much as you can about the movie, then this commentary is a must listen. “Marvel One-Shot” takes its name from the comic book of the same name, but this is a little scene between Iron Man (Tony Stark – Robert Downey Jr.) and General Ross. This is merely a set up for next summer’s “The Avengers”. We then get into a series of featurettes (all shown in HD) that look at the movie from a technical standpoint, some of the different elements that were created for the movie and even the casting process. We top this off with a conversation from Marvel founder Stan Lee. “Road to ‘The Avengers'” shows some clips from the San Diego Comic Con where the cast was revealed and whets our collective appetites for that movie. Lastly we have some 20 minutes of deleted and extended scenes. Some trailers are also included.

As much as I don’t really like everything being in 3D, I have to admit that “Thor” does look pretty good with this new format. The highlight of the 3D being in the realm of Asgard with the colors jumping off the screen, the backdrop set against the figures looks really great. The battle of the Frost Giants looks great as well and though the majority of the scenes on Earth look similar to the 2D version, there are certain spots in which the format does really work. While I prefer 2D versions of films, I do have to admit that “Thor” does look good in 3D. 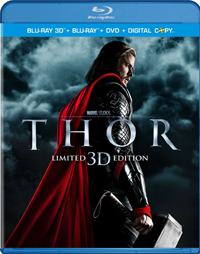