We’ve all read about the Pearl Harbor bombing in history books and seen television programs about it, but never have we seen both sides of the story, until now. In “Tora! Tora! Tora!”, we’re taken behind the lines of both the American and Japanese forces, to see just how this tragic event unfolded, first hand. We all know what happens in the end of course, but as this film proves, there is much more to this story than a single bombing raid, to be sure. You’ll watch as both sides push to gain upper hand, then back off somewhat, only to attempt it all over again. Was Pearl Harbor a complete surprise attack as we’ve been told, or was there some knowledge about the swarms, only delivered too late to prepare enough for the onslaught? In other words, could we have avoided the carnage or at least lessened it?

This is the second edition of “Tora! Tora! Tora!” to hit this format, but this time around, Fox has laid on some cool extras to enhance the experience. The video & audio seem to be the same however, so if you’re not into the bonus materials, then an upgrade isn’t called for in this case. But more on the disc’s specs later on, let’s talk about the movie itself for a spell, shall we? This film deals with the Pearl Harbor bombing, but does so in a most unique fashion. Instead of seeing things just from the American side of the coin, this picture takes us behind both lines, which paints a much different portrait about the man on both sides. It can become a little jarring going back and forth so much, but I feel it works out very well and since both sides have their own style, it is always interesting to watch. The two sides were shot by American and Japanese filmmakers, which is why each camp seems to have unique traits and such. A terrific idea and in this case, one that was executed well enough to fulfill the idea’s potential. I think this film makes for an easy recommendation and with this new special edition release, there’s no reason not to check it out.

His work hasn’t always been consistent, but in this case, director Richard Fleischer delivers and then some. This seems to me like it would be a tough feature to put together, with the two different sides of everything, but Fleischer and his crew were more than up to the task. I think “Tora! Tora! Tora!” comes through as a cohesive picture, never as two smaller efforts, which is a real feat if you ask me, given the circumstances. I am always surprised to see some of his later works in such poor form, as he came through here, on what had to be a difficult production in all respects. But Fleischer could drive home a great film when he was on his game and thankfully, he was in prime form when he worked on this picture. Other films directed by Fleischer include Soylent Green, 20,000 Leagues Under the Sea, Doctor Dolittle, Compulsion, Fantastic Voyage, and Conan the Destroyer. The cast here includes Jason Robards (Magnolia, Parenthood), E.G. Marshall (Christmas Vacation, 12 Angry Men), Martin Balsam (The Delta Force, St. Elmo’s Fire), James Whitmore (Planet of the Apes, Kiss Me Kate), and Joseph Cotten (Soylent Green, Shadow of Doubt).

The movie has been released on standard DVD at least twice and now with this Blu-ray offering, we get to see what it’ll look like in HD. The 2.35:1 AVC HD transfer looks surprisingly good. For a movie of this age, I was expecting to be let down but aside from the occasional softness, I was heartily impressed. Flesh tones look very real and natural and while the black levels are almost spot on, there’s a bit of jittering in a few select scenes. Detail looks very good and suffice it to say that I’m very pleased with how this appears on Blu-ray.

The audio mix has been amped up to a DTS HD Master Audio track and while it somewhat pales in comparison to more modern movies (“Pearl Harbor” for instance), it does have a few moments. The surrounds are fairly active during a number of scenes and though the front stage takes the brunt of the attack, pardon the pun, we do get the LFE to chime in as well. Dialogue is a bit on the muddy side in a few areas, but by and large it delivers the goods and does it well.

With the supplements, the main draw is the audio commentary track, which features director Richard Fleischer and Japanese film historian Stuart Galbraith. This track moves at a nice pace and whenever it slows, Galbraith steps in to add some comments or ask questions of Fleischer, very cool session indeed. I do wish Fleischer was more open here, but he does manage to reveal some good information, so no real complaints in the end. Next up is “Day of Infamy,” a featurette that looks at the Pearl Harbor incident. No, this is not focused on the film, but since it deals with the same topic, I think it enhances the film’s. The piece runs just over twenty minutes and while sometimes a little slow, I found it to be well made and informative program. Moving on we find “History vs. Hollywood” and in this 90 minute documentary (originally produced for the History Channel back in 2001) we gets tons of information about the production as well as some accounts from vets who were at Pearl Harbor. The piece is narrated by Burt Reynolds. AMC’s Backstory of the film is also included and if you’ve seen one of these then you’ll know what to expect. The same still galleries are included as is the original theatrical trailer. This Blu-ray does also feature a 20 page booklet to accompany the HD release. 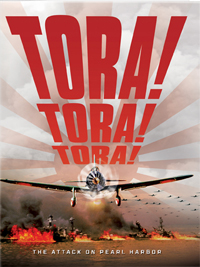