I must admit that I was strangely surprised when watching “Without a Paddle”. The movie was made by MTV films, so right away I expected it to feature bands I have never heard of and a plot that I would find juvenile at best. That wasn’t the case. As a male in his early 30’s, I stopped watching MTV about the same time I graduated from college. And I was a bit curious when I saw Seth Green (age 30), Matthew Lillard (age 34) and Dax (who just turned 30). So, ok, this wasn’t playing to an audience of teenagers (well, it was, but in a different way) and it had a cast with “the guy from ‘Austin Powers'”, “the guy from ‘Scream'” and “the guy from ‘Punk’d'”. I’m officially intrigued. What really got my interest was the fact that these guys were my age. They had graduated from High School and ten years had passed, they did their own things and now an event happened that has brought them back together. This goes to show that no matter what you see in commercials and on the cover of the movie, what’s inside can surprise you.

We meet Tom (Dax Shepard), Jerry (Matthew Lillard) and Dan (Seth Green) as kids. They re-enact all of the trendy things from the 80’s (Indiana Jones, Ghostbusters, etc.) until we see them graduate from High School. The fourth of the group, Billy, has died and the three get back together for the funeral. As it turns out, Jerry is treading water in a dead end office job and is afraid to commit to his girlfriend. Tom has lived on the edge and is obviously some sort of drifter and Dan has become a doctor who’s too afraid to ask out his nurse or speak up to get his parking space back. The three decide to follow through on an old childhood adventure and find a lost treasure (after they discover that Billy had been doing serious research on it and it was indeed real). What happens next is more of a comedic retelling of “Deliverance” (complete with a cameo by Burt Reynolds) as the trio manages to get into every disaster they can find. There are backwoods rednecks that have a marijuana farm, hippie girls who have taken refuge in a tree and a cell-phone-eating bear just to name a few things. Sure, there are some predictable moments but if you suspend your disbelief for 90 minutes, you might just have as much fun as I did. Enjoy.

I can remember watching “Without a Paddle” when it came to standard DVD back in early 2005 and being very impressed with the way it looked visually. Well, four years have passed (it’s hard to believe, actually) and now the film is in HD. The 2.35:1 AVC HD transfer looks just as good as I remember the standard DVD looking and the scenes seem a bit sharper. The scene where the two girls bathe each other has never looked better! Colors are vivid and the scenic Pacific Northwest has never looked greener.

The Dolby TrueHD soundtrack isn’t that much of an improvement over the 5.1 track, but there are some subtle nuances. The surrounds kick in during several instances throughout the film and add the depth that gives you the feeling you’re “in” the movie (I guess that’s the point, eh?). Dialogue was very naturalistic and the rest of the soundtrack sounded very clean coming out of the front speakers. When you think of a comedy, dynamic audio isn’t the first thing that comes to mind but “Without a Paddle” proves this stereotype wrong.

As I find with most Paramount catalog titles, “Without a Paddle” has the exact same supplements as the standard DVD release. It comes with two audio commentaries (ok, one is a “Video” commentary). The first is with director Steven Brill, who seems to have had a good time here. He talks of the shoot, casting and the challenges of working outdoors. Brill is also present on the Video commentary (occasionally a window will pop up with Brill, Seth Green, Matthew Lillard and Dax Shepard) and gives an entirely new track. The guys seem to have had a fun time and talk of the dangers of white water rafting, bears and the like. It’s clear these guys had a great time making the movie and it’s represented on this track. Several deleted scenes are shown with optional commentary to tell why they were cut. Some are longer versions of scenes that were already in the movie. MTV’s “Making the Movie: Without a Paddle” essentially narrates the film with input from the cast and crew. If you don’t have time to watch the movie (a mere 95 minutes), then you can get the Cliffs Notes version here in about twenty. There are some MTV teaser trailers (called Interstitials) for the movie (clearly done either before or after the shoot as Matthew Lillard’s hair is noticeably longer). 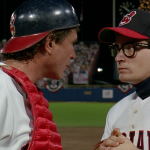