There’s a scene in The Adam Project which really resonated with me. I don’t know why, but suffice it to say when your mother says the phrase “You know, you can be a real jerk sometimes…” I have to imagine that it strikes a chord. I’ll come back to that later. Switching gears, this is the second collaboration between Ryan Reynolds and director Shawn Levy. The two had a jolly ‘ol time with 2021’s Free Guy which I personally found to have more of a heart than initially expected. The duo are back and time travel is now the game. And for those that were clamoring for a reunion with Jennifer Garner and Mark Ruffalo from 13 Going on 30 – well your wait is finally over.

Adam Reed (Ryan Reynolds as an adult, Walker Scobell as a child) is a pilot from the year 2050. He’s searching for his missing wife, Laura (Zoe Saldana) to prevent corrupt businesswoman Maya (Catherine Keener) from her attempting to weaponize time travel. Adam, badly injured, manages to make the “jump” in his time traveling jet, back to the year 2022 where he runs into his 12 year-old self. Adam has recently lost his father (Mark Ruffalo) and takes out his angers and aggressions on his mother (Jennifer Garner) as well as bullies at school (this doesn’t work out). Adam, all the while, is being pursued by soldiers from the future who have their mission to complete. Adam’s ultimate mission is to go to the year 2018 to prevent all of this from happening.

Movies about time travel don’t always have to have countless paradoxes. Sometimes they’re just fun to watch. For every Back to the Future where interacting with your younger self could be deadly, The Adam Project seems to relish in it. And, truthfully, it’s the chemistry between Reynolds and Scobell that really make the movie work. There’s a more emotional and, dare I say it, human side to Reynolds’ character in this film, it’s entertaining yet not typical “Ryan Reynolds.” If you peel back a few layers of the film we can see how loss really can impact one’s life. The older Reynolds sees his younger self and his anger. The younger version sees that he’ll grow up to look like Ryan Reynolds. This one won’t rewrite how science-fiction movies are told, but like most all of Reynolds’ other films, it’s entertaining. And that’s the point.

There was a time when I didn’t trust the “technology” to stream a 4K movie and have it compare to a piece of physical media (a disc). A lot can happen in a few years and, stubborn as I am, I do have to admit that streaming movies is sometimes easier than putting the disc in my PS5. Having said that, the 2.39:1 4K image via Netflix looks pretty darn impressive. Everything we’ve come to expect from new films is present here with a nice Dolby Vision image, razor sharp detail and everything in between. I’m sure this will eventually land on disc at some future point in time (pun fully intended), but I’d find it hard to believe that it’ll look much better than this.

The included Dolby Atmos sound mix has several instances in which to flex its muscle. Yes, we’ve got a few jets firing at one another and it makes for some great action sequences. Surrounds are surprisingly active as well with some LFE thrown in for good measure. Vocals, as expected, are front and center and lack any distortion. This one seems to have found a balance between “action movie” and “drama” when it comes to the sound mix. It’s rich and robust when you want it to be and soft and subtle when the film calls for it. A great effort.

The Adam Project isn’t trying to change the world. It’s fun, it’s got a bit of melodrama mixed in and features a great cast. Some might question some of the scenes and how they fit in with the “space/time continuum” but my guess is that if people are really going there, they won’t enjoy it. Reynolds essentially does what he does best, but with a little more heart than usual. I had a good time watching it. So will you. 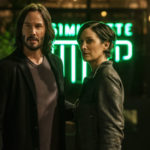 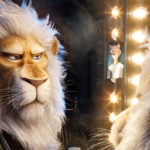