Dolphin Tale is definitely a fun for the whole family. If you are able to catch this film though, the best way to do it would be in its filmed 3D presentation. The story of rescue of the dolphin, Winter, is nothing out of the ordinary and the story has been done before but this one stands out as something special. This film is just packed with a big heart and some really great acting including great performances from Harry Connick Jr, Ashley Judd and Morgan Freeman. The film looks decent is 2D, even though it would shines much more in its 3D presentation. The DTS-HD Master Audio 5.1 surround track is fantastic and really shines during the water scenes. Overall this is a heartwarming film that does it job very well in entertaining families this holiday season.

The special features includes are decent. The first one is called â€œThe Hutash Rainbow Bridgeâ€ is a sort of CGI short, which is definitely fun and a definite for kids. â€œAt Home with Winterâ€ is 15-minute behind-the-scenes look at the film with the cast and crew, nothing great but not bad either. â€œSpotlight on a Sceneâ€ features director Charles Martin Smith and producer Andrew Kosove as they discuss the ffilm’s opening sequence and the 3D dimension. The longest special feature on the disc is â€œWinter’s Inspirationâ€, about 20 minutes, which focuses on the true story of Winter. Not sure how it is really related to â€œDolphin Taleâ€ but there is an animated short called â€œOrmie and the Cookie Jar about a pig trying to reach a cookie jar on top of a refrigerator. It’s cute but doesn’t fit. There is one deleted (and forgettable) scene called â€œWinter Meets Panamaâ€. Lastly there is a fun gag reel. This combo pack includes the Blu-ray and DVD, also included is a Ultraviolet Digital Copy to watch anywhere from your computer or digital devices. I really enjoy this feature.

“Dolphin Tale” is presented in 1.77:1 AVC HD transfer. The image is pretty sharp and I found minimal flaws, even the print used looks clean, aside from some slight grain. The print hasn’t been restored, but you can tell a solid source was used. The colors are bold and never smear, while flesh tones seem natural and consistent, no problems there. The contrast is more than solid also, though perhaps not as sharp and stark as I would have liked. In the end, this treatment meets or exceeds all expectations, so kudos to Warner here.

All the splashes, whistles, and blowhole explosions sound solid in the included DTS HD Master Audio soundtrack. The soundtrack is not one of my favorites, but it comes across well here and helps keep the ears entertained. There isn’t much here in terms of sound effects, but the ones that do surface sound solid, but not as rich as a more action driven film would allow. The dialogue is the heart and soul of this mix and it sounds terrific, very crisp and clean, always at a proper volume also.

Extras begin with the short “Hutash’s Rainbow Bridge”, which sets a Harry Connick Jr. monologue from the film to animation, some of it crude CGI. “At Home with Winter” discusses the process of telling Winter’s story with Winter playing herself. Starting with general motivations, the featurette narrows in on practical issues, like filming in water and protecting Winter from sunburn. “Spotlight on a Scene” breaks down the film’s opening sequence, from storyboards to shooting live-action plates in the Cayman Islands to computer-animating the dolphins to incorporating 3D. Director Charles Martin Smith and others discuss the processes at work, yielding a narrow but informative making-of featurette. “Winter’s Inspiration” tells more of the dolphin’s true story. Her trainers, doctors, and rescuers recall the 2005 experience that the film dramatizes. It goes into detail and ties Winter’s recovery into other inspiring amputation triumphs. Rob Silvestri’s Ormie and the Cookie Jar (3:59) is a computer-animated short about Ormie, a pig trying to reach the cookie jar atop his fridge. Sparsely animated, dialogue-free, and overly scored, this is a pretty lame attempt at a Pixar-style cartoon short. Its inclusion is utterly random; I have no idea why this is here. There is also a deleted scene, a gag reel a DVD of the film as well as the UV copy of the film. 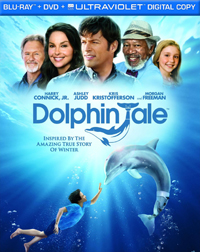