Edina (Jennifer Saunders) and Patsy (Joanna Lumley) are best friends, but they often find themselves in outrageous, outlandish, and impossible situations. The two have found success in the fashion business, Patsy even used to be a model, but now they’ve reached the dreaded 40s, both women are beyond shaken. Edina works hard at her magazine office, but works twice at hard when getting dressed, putting on makeup, or trying to act twenty years younger than she is, so most of her time is devoted to the latter actions. Patsy is in the same boat, with her modeling days behind her, but unwilling to release those days, opting for endless bouts of plastic surgery, layers of makeup, expensive clothes, and young men to amuse herself with. As the two friends battle the aging process, they run into moral obstacles thanks to Edina’s daughter Saffron, confrontations with ex-husbands, and of course, the ever changing world of fashion. But will the rounds of booze, chic narcotics, young men, and off the wall fashions make them feel younger, happier, and more satisfied when all is said and done?

I was hooked on AbFab from the first time I saw it on Comedy Central, as it was hilarious, often brilliant, and always one of a kind. So of course, I am thrilled to have this AbFab DVD set, which contains the first three seasons of the series, plus a nice selection of supplements, from featurettes to outrageous outtakes. The series revolves around Jennifer Saunders and Joanna Lumley, both of whom are excellent here and play the characters to sheer perfection, which means tons of hilarious moments. The subject matter is stronger than most American sitcoms, with a lot of talk about graphic sex, drug use, and assorted other sensitive topics, but the show never uses them for simple shock value. So no, AbFab is not a wholesome family sitcom, but it is well written, flawlessly performed, and ranks as one of the funniest shows of all time, if you ask me. This four disc set from BBC Home Video contains all eighteen episodes from seasons 1-3, plus a bonus disc that is dedicated to various bonus materials. In other words, this is an excellent series presented in an excellent treatment, so don’t hesitate to add AbFab to your collection.

The episodes are presented in full frame form, as intended. I found the episodes to be cleaner and sharper than broadcast, which is good news. I was never let down by the televised editions, but it is nice to have improved visuals, without a doubt. The show’s vivid color scheme looks terrific here, with vibrant hues, natural flesh tones, and no signs of smears, blurs, or any kind of oversaturation present. The black levels seem crisp and well defined also, with no shadow depth issues or loss of visible detail. I am more than pleased here with BBC Home Video’s work and other fans will be also, as these episodes look awesome!

Not a lot to talk about here, but the included track makes sure all the elements come through well enough, which proves to be sufficient. This kind of material doesn’t need much in terms of bells & whistles, so the basic presentation found here is more than up to the task. The music and sound effects are solid all around, but dialogue is the main element here and in that regard, this track delivers on all counts. The vocals are clean, crisp, and always well balanced in terms of volume, so in the end, the audio here is solid on all fronts.

The bonus disc houses about two hours worth of bonus materials, such as the short from French & Saunders that inspired the series, a look at memorable AbFab moments, a peek at some of the stars who have visited the show, and much more. This release also includes a selection of outtakes from each season, still photos, and a special guide to the characters of AbFab.

TAGGED: Absolutely Fabulous: The Complete Collection
blurayauthority January 28, 2012
Previous Article Three to Tango
Next Article Above All Else: The Everst Dream 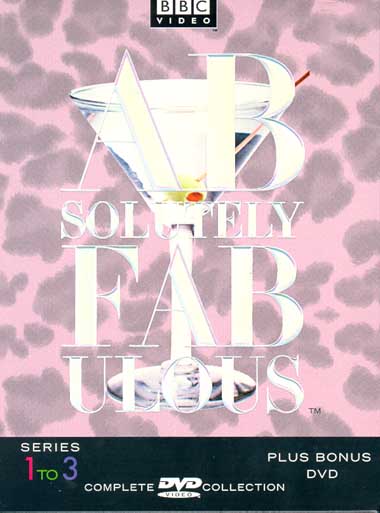