In Hollywood, everything is derivative, or so the saying goes, but if you need confirmation, look no further than American Pie 2. In some respects a much-anticipated sequel by younger audiences, it’s more an obvious exploitation of a smash hit seeking to capitalize on the formula of its predecessor rather than a truly necessary follow-up. And while that’s certainly no unfamiliar combination in contemporary cinema, it’s no breeding ground for success in a character-oriented teen comedy like this one.

For the second round, screenwriter Adam Herz has indeed reunited almost all of his characters from 1999’s American Pie, with a few notable exceptions. The fearsome foursome of Jim (Jason Biggs), Oz (Chris Klein), Finch (Eddie Kaye Thomas), and Kevin (Thomas Ian Nicholas) have all come back, and although they’ve been through a year of college since the first film, they’re still filled with the teenage male’s desire for — to put it bluntly — sex. And while they’ve all got obstacles to overcome (Jim, for instance, worries that he’s no good in bed, and Oz must cope with his girlfriend spending the summer abroad in a school program), they nevertheless plan to throw the party to end all parties and reaffirm their self-made commitments of sexual prowess.

In executing all of this, the smartest move made in pre-production was rounding up the host of usual suspects for this entertaining but completely arbitrary sequel. The first American Pie launched the careers of many of the cast members, including Jason Biggs and Seann William Scott (who plays the infamous partier Steve Stifler), but they’re probably best known for their starring roles from this teen comedy franchise. As the second edition proves, they’ve inhabit these characters quite nicely, and do wonders for what might otherwise have been a typically lame sequel script.

Which is indeed where the movie runs south (if indeed it does — it will be up to teen audiences to determine the amount of hokum in the rag for American Pie 2). Adam Herz may have concocted a great group of characters, but upon reexamination two years later, he and co-writer David Steinberg quickly discover that they’re nothing more than stereotypical husks called upon to perform in outrageous circumstances. Not that there’s anything wrong with that, because both the original Pie and its sequel are 100-minute conglomerations of outrageous circumstances, but in certain instances it becomes painfully obvious that the charm of many of the characters has run out.

For instance, Jim’s part-time love interest Michelle (Alyson Hannigan), the infamous band camp geek from the original film, had few lines in the original that went beyond the “This one time, at band camp,” intro — which was perfect for the purposes of the film. Here, though, Herz and Steinberg attempt to use her character more often, and while she served her purpose as a gimmick in the first film, here, she’s a bit stale.

Other characters come off the same way, and most of them female — which is probably because the movie focuses solely on our four heroes’ sexual conquests. In that regard, the focus is decidedly more raunchy this go-round, enough so that it’s worth it to mention that director J.B. Rogers served as assistant director on many of the Farrelly brothers’ films, and also helmed the knock-off gross-out comedy Say It Isn’t So!, again with Chris Klein. The Farrelly brothers’ touch is clearly more evident here than in the original, which was directed by Adam Herz’s erstwhile showbiz partner Paul Weitz.

The only other hangup that the film suffers from is the situational aspect — the film is essentially the same narrative from the first, exploiting many of the same gimmicks (Jim’s Internet sex-romp from the first is woefully similar to the CB lesbian sex broadcast from this issue), but transplanted a year later. And while the boys’ adventures might’ve been reasonably acceptable in the high school graduate context — four guys looking to have some fun in their last summer together before college — it’s a bit more outlandish in the summer after the freshman year of college. The film’s closing lines of dialogue even leave the back door open for additional sequels, which hopefully will never see the light of day — with each passing year in these characters’ lives, their escapades will become increasingly unrealistic.

But for the time being it’s still mildly plausible, and that being said, the cast and crew of American Pie 2 didn’t do too badly out of the gate. They managed to string together a sequel which is faithful enough to the original that it shouldn’t disappoint fans, while exhibiting an array of new (if derivative) material that should make this a fine companion piece to the original. While the pie itself only makes a brief, blink-and-you-missed-it appearance, there’s plenty of like stunts to be seen. And that might just be the biggest problem — they’re like stunts. If only they’d have been more original.

The first version of American Pie (make that verisions) looked somewhat decent, but had a tint to the whole picture that made it look very dark. While the format was still relatively young at the time, many overlooked it. But as we were plagued with more “Ultimate Editions” of the movie, the print remained the same and it was indeed bad. The second installment, even considering all of the information on this disc, looks great. The colors are very bright and vivid and there is hardly any artifacting/edge enhancement to worry about. This, of course, is expected of a new DVD these days and rest assured that when you look at this anamorphic 1.85:1 transfer, you’ll be satisfied. The colors and fleshtones appear very natural, though at times they seem to be a bit over=saturated. Black levels are dead on target and the level of detail is consistent throughout. Nothing major to report here, it’s a great-looking transfer plain and simple.

What is beginning to become "the norm" when it comes to releases from Universal; we are treated to dual DTS and Dolby Digital tracks. While comedies, even new ones like this, don’t often merit such dynamic sound, it’s very welcome for them to sound as good as they can. Essentially both of the tracks are identical, but I’m giving the edge to the DTS, as per usual. The DTS track has a very clean-sounding dialogue track and the surround effects, while not that prominent, do emit from the speakers and add a little life to some key scenes. Most of the action is limited to the front three channels, and that’s fine because most of the humor is purely physical and is taking place visually as opposed to hearing it. As I mentioned before, both tracks sound great, not superior by any means; but you should be pleased with either one you choose.

Sensing there may not need to be an "Ultimate Edition" of American Pie 2, Universal has loaded down this disc (singular) with it’s share of extras. But then again, Marketing runs this country of ours, so be on the lookout for an "Ultimate Edition"! Only kidding. This is the unrated version, which has an additional 6 minutes of scenes that were not in the theatrical release. Some might consider that the most succulent supplement of all! In addition to the unrated version, we also get some featurettes. The first is "Your Favorite Piece of Pie" which is a Top 10 list of the best scenes from the first and second installment of these movies. A little more than half are from the second, but some from the first made it in (guess which ones)! Some classic quotes, which Universal is the only studio to do this, are included which lets you select from fifteen of the most popular lines. When selected, you’ll hear the actor say the line. Interesting…Some music highlights are also included, by this I mean that you can select from 30 song segments from the film, and then it plays the scene in which the song is heard. But what I really think is that it’s a device to get you to buy the soundtrack!

Some more featurettes include "The Baking of American Pie 2", which is a 25 minute piece on the making of the movie. It’s your typical fluff that we’ve become so used to, but at nearly a half hour, it does have more than it’s share (get it) of information.. The actors and the filmmakers all say why they did the film (most of the stars of the film have gone onto more projects with varying success). Also included is the featurette "Good times with the Cast and Crew". Essentially, this is a short that shows the (you guessed it) cast and crew and how much fun they had making the film. Neato. There are some outtakes as well, which I always find fun to watch. You can’t help but to laugh when you see the actors start to lose control and drop their lines. Some deleted scenes are also included which can be played in order. Most are extended versions of scenes already in the film, but some are new. I feel the film was fine the way it was and was happy these were cut. The Original Casting Tapes are scenes from some of the cast members as they auditioned for the parts. Another interesting feature, but not one that you’ll watch over and over (or maybe you will, I don’t know)!

Trying to compete with Se7en and Fight Club, American Pie 2 has four commentary tracks. Why so many, I don’t know, but they’re there if you want them. The Director’s track is the most informative in my opinion. J.B. Rogers focuses more on the technical aspect of things (as most Directors will tend to do) and due to some lulls in the recording, this can be a bit boring. Adam Herz takes part in the second track and as the screenwriter, he has a bit more to offer. His focus is, obviously, on the writing and how it differed from the script and so on. We come to the actor’s commentaries, the first with Jason Biggs, Mena Suvari and Thomas Ian Nichols. Their commentary is very fun and laid back. Suvari tends to interact with the men more than commentate on the screen, but it’s the most fun of them all. This leads us to the last track (which I feel should have been edited into the third track, both to save me 2 hours and to free up a bit more disc space) with Eddie Kay Thomas. A lot of spaces are in this track, as is so common with one person commentaries. He seems very relaxed, but doesn’t offer much insight to the film. Skip this track unless you have nothing else better to do with your 2 hours! Several DVD-ROM features have also been included as well. Universal seems to be leading the pack when it comes to the online department of DVD’s. Stifler’s Mix is an interactive feature that allows you to create your own mix of music, you learn some information on the cast and are prompted for a DVD newsletter as well. Lastly, we have a trailer presented in non-anamorphic widescreen, and the standard production notes and cast bios. All in all, this is one loaded down disc, and with the 2 disc sets being all the rage, I wonder why this wasn’t one of them. Still, the disc looks and sounds great and if you’re a fan of either movie, then by all means…pick this up! 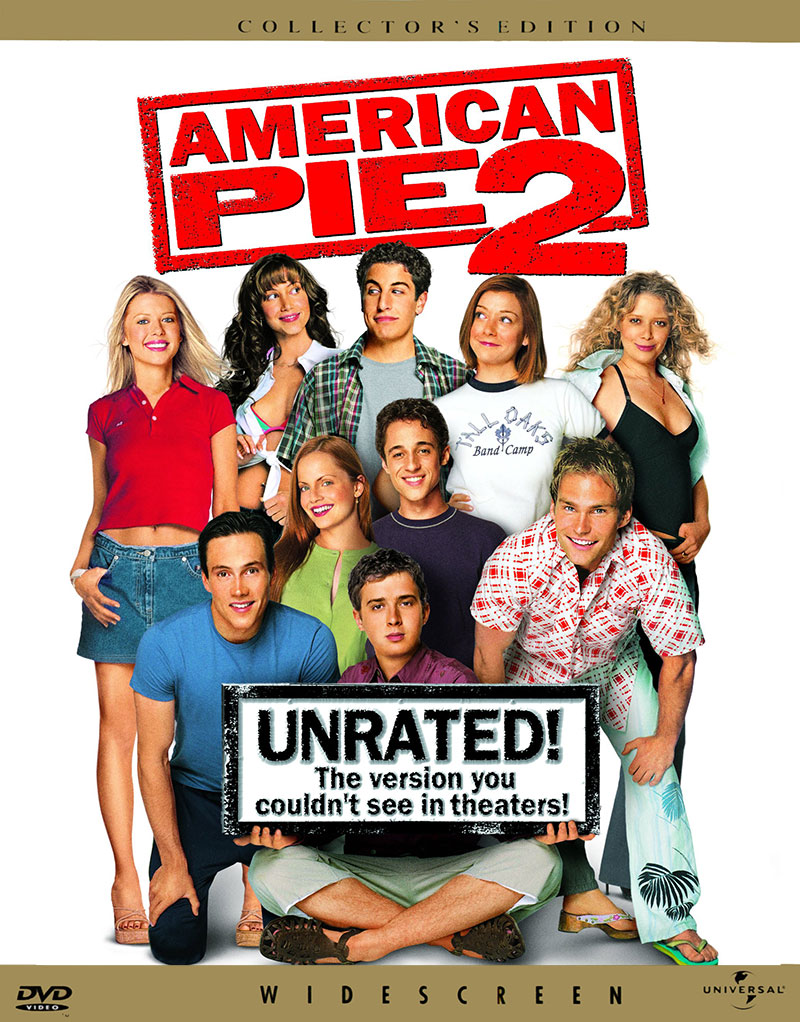