As Christmas approaches, a group of sorority sisters begin to make their holiday plans, but those plans might not work out as expected. The mood is sort of tense as it is, but when a series of strange phone calls start, the mood turns for the worse. No one knows who is on the other end of these menacing telephone calls, but it is starting to get to the girls and of course, they want to figure out who is behind them. On edge already, the girls are sent even deeper into fear when one of them disappears without a trace. As the phone calls and now this missing girl have them terrified, they contact the police, but as there is no real proof, the authorities all but ignore the pleas. At the same time, Jess (Olivia Hussey) and her boyfriend Peter (Keir Dullea) find themselves in a serious situation, while Barb (Margot Kidder) has a bad attitude toward everyone, it seems. The police enter the picture when a thirteen year old girl is found dead, but will their help be enough to save the sorority girls from whatever force lurks in the night?

This disc has been available for some time as a Canadian import, but now Eclectic DVD have brought it across the border. I found the transfer, content, packaging, and even disclaimer sticker to be the same, despite reports that this version would house a widescreen edition. In any event, it is welcome news to see this available in the U.S., as Black Christmas is a terrific horror thriller. This was one of the original & more influential stalker pictures, which even predates Halloween, which seems to have taken some elements from this movie. I am unsure why Black Christmas is still not well known, but perhaps it is due to the approach taken, which values tension over blood & guts. It has touches of violence of course, but focuses more on the atmosphere, visuals, and overall eerie presence. I think it works very well, as I don’t miss the buckets of red stuff and as you know, I love piles of gore. I suppose sorority house murders and the holidays just go hand in hand, as I like this movie a lot and I think it’s one of the elite level horror pictures. I am pleased to see this disc brought to American shelves, as I think the easier access will provide more of a chance for newcomers to discover the film.

The director here is Bob Clark, who is better known for his comedic work, but as he proves here, he can handle horror as well. Clark had some experience in the genre however, so he wasn’t flying blind and you can tell he had a distinct vision here. The camerawork in Black Christmas is terrific, very well done and atmospheric, which is vital in this kind of flick. The tension is tight and ever present, which is one of the main reasons this picture is so effective. Clark follows some traditional guidelines in terms of horror, but also paves some new roads, ones which would be used by horror directors for years to come. Not to mention the touches of humor, which are the main fingerprints that let us know Clark was behind the camera here. Other films directed by Clark include Baby Geniuses, Porky’s, From the Hip, Loose Cannons, and A Christmas Story. The cast includes Olivia Hussey (Death on the Nile, Saving Grace), Margot Kidder (Sisters, Superman), and Keir Dullea (2001: A Space Odyssey, Blind Date).

Black Christmas is presented in a full frame transfer. A sticker discusses this choice, as the film was shown in theaters at various aspect ratios, but for this release, the entire negative is revealed. I saw no pan & scan in the least and the image composition seems in order, just as stated on the disclaimer sticker. As this is a low budget horror movie from 1974, the image is not pristine, but it looks better than expected. A little grain is evident and some wear is seen, but all things considered, this is a very nice presentation. The colors look solid and as intended, while contrast is much sharper than I counted on, terrific work indeed. All in all, a great visual treatment and one that should please both fans and newcomers.

The audio here is basic in all respects, but as this is a low budget 70s horror movie, I didn’t expect anything else. The track has aged well, with minimal harshness or distortion and I doubt anyone will be let down here. The eerie music and assorted sound effects are in solid form, while dialogue is clean and never out of balance. You won’t use this disc to showcase your home theater, but it more than handles this material, which is what counts. 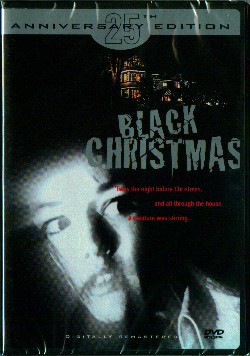