Gloria Wondrous (Elizabeth Taylor) is the woman that every man wants, while every woman wants to be her. She knows how desirable she is also, so she can use her looks and such to advance herself, which she often does. The men clamor to be with her and no matter how brief their time with her, it is as if they’ve spent time with a goddess. But she also longs for true love and the time of searching for happiness have left her weary, with little hope that she’ll ever find true love and be happy forever. As she wanders through life going through men, she used to think she was doing what she wanted, but now it seems she has begun to realize it wasn’t after all. She hasn’t always taken the right roads to get where she is, but perhaps she can make a few right turns and get back on track in the end. Will Gloria ever find the future she longs for, or is she doomed to be loveless for the rest of her life?

Ever want to see a feature length soap opera? If so, then Butterfield 8 is the right film for you and what better way to experience it, than on our beloved little shiny discs? This film takes all the trash, gossip, sex, and other elements needed for a good soap opera and throws them all together to create a season’s worth of soap goodness, in just one hundred and nine minutes. I like this movie to a certain extent, but by no means do I consider it a classic or a great film. The storyline is good, but again seems like an entire soaps season smooshed into a movie, which can create some problems. Still, the glamour vs. trash angle and excellent performances make this one more than worth a glance. This is a very visual film that sucks you in, which leads you think this is just a slick cover for an empty film. But there is a nice drama underneath it all, even if it does reek of soap opera goodness. I will say though, this is not like a soap opera in the end, in terms of writing. This is more like soap opera as a high art, or the best example of what a soap opera could be. I recommend this movie to all interested and if nothing else, check it out to see how foxy Liz Taylor used to look.

Sometimes a woman can blaze through a movie and look so good, you can’t pay attention to a word she says. This seems to be the case with Elizabeth Taylor’s performance in this film, as she looks amazing and supplies the perfect persona to compliment her looks. Her character is more than eye candy of course, but who can tell when she is showing so much cleavage all the time, right? If you can look beyond the sultry, sexy nature of Taylor for a while, you’ll see how intricate this role is and how perfectly she plays it. She uses her beauty and sex appeal to be sure, but she also makes good use of her skills as an actor, which makes a perfect blend for this role. A testament to her work here is the Oscar she won for the film, which was well deserved. Other films with great performances by Taylor include The Taming Of The Shrew, The Sandpiper, Cat On A Hot Tin Roof, The Last Time I Saw Paris, and of course, Cleopatra. The rest of the cast includes Dina Merrill (The Player, Caddyshack II), Mildred Dunnock (Peyton Place, The Spiral Staircase), Eddie Fisher (Nothing Lasts Forever, Bundle Of Joy), Betty Field (Flesh and Fantasy, Picnic), and Laurence Harvey (The Manchurian Candidate, Of Human Bondage).

Butterfield 8 is presented in a 2.35:1 anamorphic widescreen transfer, with a full frame version included on the disc’s flip side. This is a nice overall transfer that shows little signs of age, aside from some minor debris and grain from time to time. The colors look bright and without errors, while the flesh tones appear natural and warm also. I especially found the pinkish hues to be pleasing, as they have just the right pastel shades. The contrast shows no problems either, stark at all times and offering a high level of visible detail. This transfer also shows minimal compression flaws, another solid transfer for an older film by the folks at Warner Bros.

This disc uses the original mono track, which seems in good form and is adequate for this material. I found little harshness present and no mono trademark hiss, which pleased me to no end. The music sounds good and the lack of wear surprised me, as I expected a rather weathered score to be present. The sound effects serve as background fodder for the most part, but still emerge in fine form with no problems to report. The dialogue is the main focus and it sounds terrific, no volume or clarity issues in the least. This disc also includes a French language track, as well as English & French subtitles.

This disc includes some talent files and the film’s theatrical trailer. 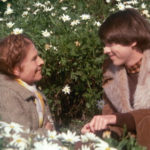