It seems like some people will do anything to regain their youth, including taking experimental drugs, complete with dangerous potential side effects. Janice Starling (Susan Cabot) is a woman afraid of getting old and as the head of a cosmetics manufacturer, she thinks she has the access to prevent the aging process. Of course, all sorts of strange concoctions are tossed about as potential age prevention devices, including some very out there ones. In the case of Janice, she decides to use a special jelly from wasps, which seems to turn the trick. But while this jelly provides a fountain of youth of sorts for Janice, it also comes with a serious problem. At certain times, she transforms into a hideous wasp woman and seeks nothing less than death, destruction, and utter chaos. Sure, she looks good when she isn’t a buzzing beast, but is it really worth the trouble just to shed a few wrinkles here and there?

I like The Wasp Woman and am pleased to see it released yet again, but I do wish we could get a disc devoted to just this movie. This Roger Corman produced & directed cheapie offers some real fun, if you’re a fan of low rent flicks, that is. No, this movie is not a classic by any means, but The Wasp Woman has some good moments, more good than bad, I think. You have to like the cheap sci/fi cinema films of course, but if you do, this is one movie you don’t want to miss. As usual, Corman is able make every cent show up on screen, with some decent visuals and production values, as far as Corman productions go, that is. Now we all laugh at the special effects of course, but for the time, this is good stuff on the low budget involved. Corman is strapped in terms of cast members however, which means lots of ham handed performances, but it all adds to the camp value, at least I think so. I wish we could see a special edition release of The Wasp Woman at some point, but this one is anamorphic and as such, is a better value than the other editions out there.

A small town in Texas has found itself under attack, but not from bandits, ruthless government agents, or even aliens. No, the town is being terrorized by a giant lizard and not some foreign one either, a hometown Giant Gila Monster. It seems that even when it comes to destructive beasts, those Texans like to keep with the domestic models, to help the economy or some such. But aside from that, the Texans are also under siege from a country singer with terrible pipes, no wait…he’s the hero in this story! As the massive lizard smashes his way across the Lone Star State, can this warbler with no talent manage to thwart his efforts? I tried to extend this plot synopsis, but I simply couldn’t and as such, it will have to make due. If you watch the movie, then you’ll see the entire plot and wonder how I was able to pen as much as I have, trust me.

As much as I want to praise The Giant Gila Monster, I have to admit that it is one of the worst monster movies I’ve seen. In other words, it is a natural choice to fill out this double feature of drive-in cinematic bliss. The premise sounds like more fun than the movie turns out to be, but it still has some fun moments, without a doubt. The budget here was paper thin and as such, there’s not as much time spent on the monster as I’d like, which slows this mess down a lot. As a result of lessened monster presence, this movie remains slow and dull most of the time, but man, when we see the creature, it gets cool. In addition, the insane musical pieces here drive the entertainment value through the roof, this is outrageous stuff! And in the end, the presence of a real lizard crawling on small sets is reason enough to check this one out. So if you’re a fan of bad movies, then this one is well worth a look, especially in this very cool drive-in double feature.

The Wasp Woman is presented in a 1.85:1 anamorphic widescreen transfer. I’ve seen countless home video editions of this movie and this one is the finest version out there, hands down. The print used is much cleaner than expected, with minimal defects to be seen and minor grain evident at times. As the clean print opens up the image a lot, the detail is much higher and the picture much sharper, which makes for a very impressive overall image here. I figured Elite would issue a good looking transfer and all, but all of my expectations have meet surpassed on this one, so kudos to them on their work for this release.

The Giant Gila Monster is also presented in a 1.85:1 anamorphic widescreen transfer. The image here is not too impressive, but it is no worse than other editions and as such, you’re as well covered here as anywhere. I found this black & white image to be very soft and even blurred at times, not the kind of transfer I’d hoped for, not by any means. The contrast is stable however, so not all is lost, although the print is in poor condition, marred by lines and debris. This is by no means an unwatchable visual effort, but I am pretty sure most folks will be disappointed here.

I doubt anyone will be too taken by the included mono options, but they serve their purpose and in this case, that proves to be enough. I heard minimal hiss, distortion, and harshness, although more of these flaws were evident in The Giant Gila Monster. I was never too distracted by them in either case, but it is worth a mention, in case the flaws might pester you more than they did me. The dialogue is clean and easy to understand in both cases, even the miserable songs in The Giant Gila Monster sound good (on a technical basis) within this release. As I said, these are as basic as it gets, but the basics are all that’s needed here, so no real complaints.

The real draw of Elite’s Drive-In Discs is the drive-in mode, which plays both films back to back, just like they do at real drive-ins. But you don’t just get the flicks here, as you’re treated to a real drive-in experience, complete from the ticket booth to intermission to of course, those wacky other drive-in goers. If you choose to view the films in the special DISTORTO mode, the film’s audio comes through just one speaker, while various other sound effects take over the other speakers, including the surrounds. You’ll hear people eating popcorn, giggling at certain parts of the flick, and of course, the loud mouth who yells at the screen. This mode is a lot of fun and if you ask me, is one of the coolest DVD innovations to come down the pipeline. 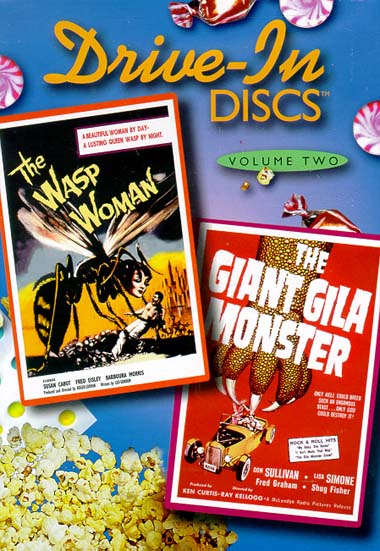