It seems that movies about witches have always seemed to feature some unattractive woman who has a giant wart on her nose, rides a broom and squeals “I’ll get you my pretty…and your little dog too”. Now, obviously that’s from The Wizard of Oz, and it’s not about witches…well sort of. That one image, that one sentence did develop some sort of stereotype for all the witches to follow (in the movies, that is). Of course, witchcraft dates back several thousand years, and became “most popular” a few hundred years back in Salem, Massachusetts…and we all know what happened there. But lately, with releases like “Matilda”, “Practical Magic” and “Hocus Pocus” the craft, as it’s known, has had a bit of a lighter side to it. In this movie entitled by the same name, we meet four ordinary girls who have already embraced their spiratuality. They consider themselves witches, but have yet to compelete their “inner circle”. Somewhat of social outcasts, they seclude themselves to corners and hanging out by themselves, only to still get mocked by the cheerleaders and football players.

It’s not until Sarah (Robin Tunney) moves to town and starts going to school that things start to happen. Sarah, whose mother died while giving birth to her, has had a troubled life. She has a caring father, loving step mother, but is obviously upset and depressed. After an attempted suicide, which has occured in the past, the family feels it necessary to relocate from San Fransisco to the Los Angeles suburbs. Sarah, an attractive girl, seems to fit in nicely, but can’t really seem to find her niche. After a failed date with Chris (Skeet Ulrich) who tells lies about their date, she meets the other three witches of the school. Sarah has never really conisdered herself a witch, but has always had inclinations towards the supernatural. She admits that if she had really wanted it to rain, the water pipe would burst, or if she wanted people to shut up, she would go deaf for a few days…not exactly your average teenager. Knowing instantly that they have their fourth (and compete) part of the puzzle completed, the girls start casting spells on others. The spells seem innocent enough, but they soon learn that a spell cast has the results thrown back at them three fold. Hence, a spell cast to make Chris like Sarah, turns Chris into an obsessive, love-driven machine. All seems to be going well at first, the girls have more self confidence and don’t feel like the recluses they once did. Bonnie (Neve Campbell), who was scarred by fire as a child, has had to keep herself covered up for fear of ridicule. Rochelle (Rachel True), has had to endure constant criticism from the blonde-haired cheerleaders at diving practice and now it’s time that the foursome can have their revenge.

But, as they learn, what goes around…comes around. The foursome start to disagree on certain things; and at Sarah’s suggestion, the group is not that anymore. The supposed “leader” of the group, Nancy (Fairuza Balk) is obviously of the darker nature. Having been born for this part, she is great in her role here. It’s Nancy’s constant overzealous behavior that scares Sarah out of the group. As things have finally started to go their way, it’s almost over in a blink of the eye as things happen to Chris and others that spells were cast upon. Sarah, doing what she believes is the right thing, goes her seperate way and all of the sudden it’s her against the other three. To tell anymore would be to give away the ending, and I don’t want to do that. I will say that The Craft is a lot better than I expected, hence it’s suprise success in early 1996. An interesting plot, great cast and great special effects make The Craft one you should pick up. With Columbia’s treatment of this title (this time around), you’ll have more than your share of extras to keep you entertained.

The Craft is presented in it’s original 1.85:1 aspect ratio, and is enhanced for widescreen TV’s. Being a Columbia/Tristar title, we know this…Overall, The Craft is a very dark movie, with the central theme being about witches, we can expect a lot of darker scenes that take place either indoors or outside at night. The picture handles the darker shades with no probelm. The indoor scenes, which appear dimly lit on purpose also have a very sharp image associated with them. While only a few scenes take place during the schoolday, the group shots of students look very clear and clean as well. There are several scenes that take place in an occult bookstore that has a very strange light…almost shot in a very natural, brownish hue, to give it that “old” look. I’m not sure if this was done on purpose, though it would tend to make sense. Overall, the picture has a few specs here and there, which bumps it down a notch, but it’s a very clear picture that is free of errors that plague even the newest of films.

A 5.1 soundtrack sounds suprsingly good here. I have to admit that I wasn’t expecting much when I popped the disc in, as the only other time I had seen the movie was in theaters. Several scenes activate the rear surround speakers that took me by suprise. Every scene in which they “invoke the spirit” has awesome sound. It’s a very 360 degree effect that really carries around the room, therefore making it all the more real. Basic effects like rain, wind and a soundtrack sound very good and clean. Again…not what I was expecting. On the whole, the dialogue suffers from somewhat of that “echo” effect in a few scenes. Maybe it was the way I was sitting, or maybe it was the way the soundtrack was remastered that resulted in some sort of loss. It’s important to note that this was only in one or two scenes, so it’s not something to discourage you from buying the disc. Aside from that, the dialogue is clear and as mentioned before, the surround effects do a great job at bringing you into the movie. As the movie progresses, it seems that more and more sound is used to “build up” the suspense and prepare you for the finale…or maybe it’s just me. Overall, a good mix.

Like Columbia’s recent special editions (Stand By Me, Men in Black), The Craft is loaded with extras. While they don’t number in comparison to the Men In Black DVD, the extras are ones that you want to have. Of course, the highlight of the disc is the feature-length commentary with Director Andrew Fleming. Fleming has sort of a taste for the occult, as evidenced by some of his comments throughout the movie. His knowledge is fairly extensive, and I’m glad that a “believer” directed the movie, as opposed to someone trying to make a statement…or, heaven forbid, money! Also included are three deleted scenes with optional commentary by Fleming. While they are not that important to the movie, it’s nice to have the director’s thoughts on the matter, as I’m usually left saying to myself “…wonder why that was cut out?” Another nice touch, as is getting more and more common these days, is an isolated music score. While The Craft may not have the best score out there, it has a very diverse, intense (at times) score that does Graeme Revell proud (he did the music for the film). Also included is a documentary for the film, entitled “Conjuring the Craft” that sheds some light on the actors and why they were chosen, and some behind the scenes information never hurt anyone as well. Lastly, there is another featurette, though this one is shorter, talent files, and a trailer for this and “I Know What You Did Last Summer”, “Dracula (Bram Stoker’s)” and “John Carpenter’s Vampires”. All in all, this little disc is loaded with about 5 hours worth of material, just about all you need if you’re fan of the film…and they might have just gained one (me) with this disc. 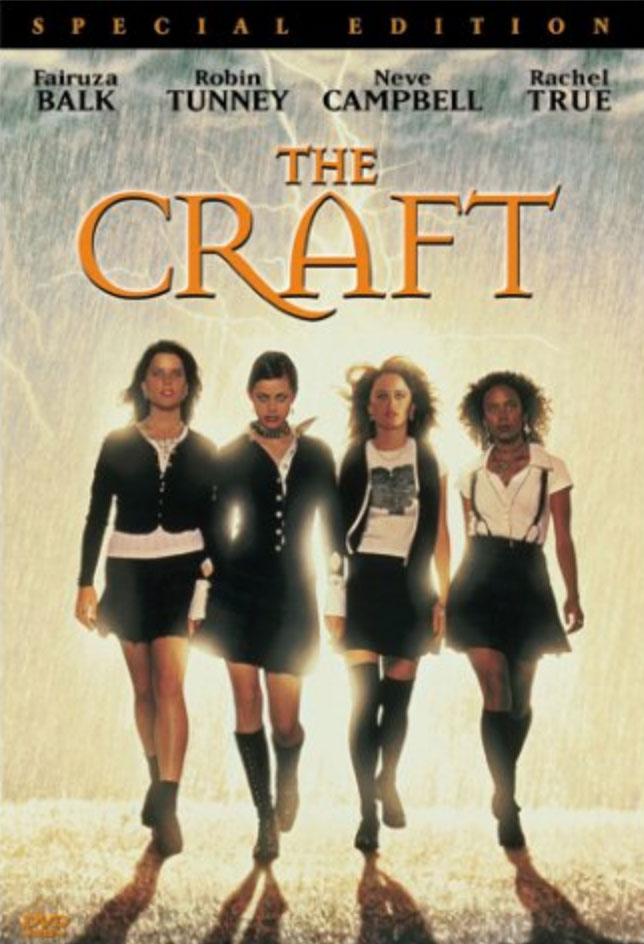